The Horseshoe Ruins Trail in Hovenweep National Monument along the south Utah and Colorado border is the first part of a 1.0 mile round trip to two ruins groups, the Horseshoe Group and the Hackberry Group. 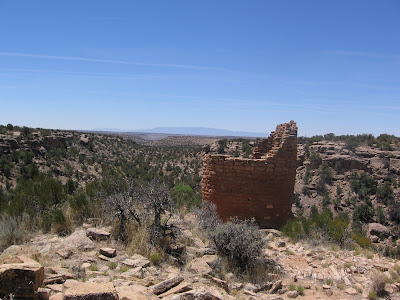 The Horseshoe Ruins Trail Head is about five miles north of the Hovenweep Park Headquarters along paved Road 10, then east down a primitive dirt road.

Tower Point Ruin is the first structure along the trail and is built in a spot that gives a good view down Horseshoe Canyon. This structure gives the appearance of having been built for defense, but no one knows. 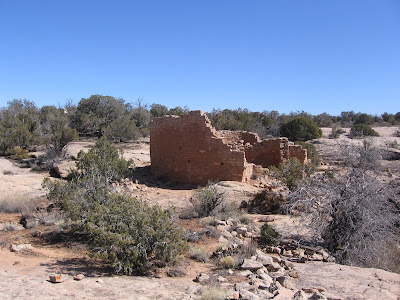 Back at the canyon head is Horseshoe House. The arrangement of four structures is apparently in a horseshoe shape, although it is hard to see that from the outside. 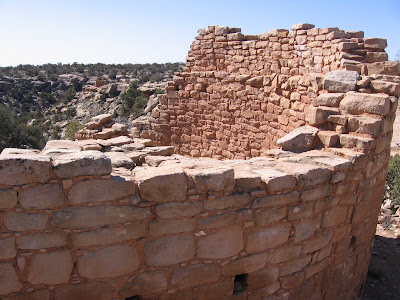 Horseshoe Ruins seems to have small peep holes rather than windows. At the Hovenweep Castle site in Little Ruin Canyon the peepholes are thought to have something to do with sky observations. The masonry here is thought to have been very precise. 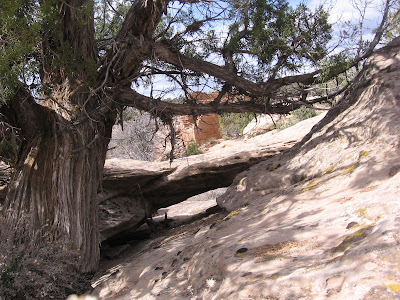 There is a small natural bridge just on the back side of the Horseshoe structure, with more rubble pile structures near the bridge. The habitat here is Pinon Pine and Utah Juniper forest with sagebrush, Mormon Tea, and Prickly Pear Cactus.

Hovenweep is now surrounded by Canyons of the Ancients National Monument, preserving a larger area and many small Ancestral Pueblo Ruins sites. 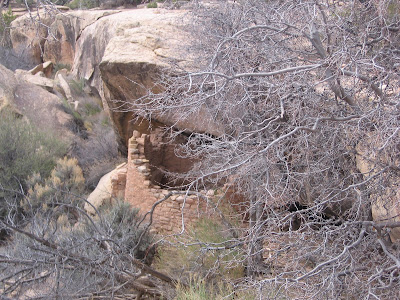 Below the rim of the main Horseshoe structure is an alcove with another large structure. This isn't visible from the Tower Point structure. It is hard to get a good view of this lower structure.

Another 0.2 miles further past Horseshoe is the Hackberry Group of ruins. This group is thought to have supported a large population due to the more reliable water supply. The Hovenweep area is very hot in summer with spring and fall being the best times to visit.

Posted by Todd Lochmoeller at 5:33 AM