Upper Yellow Jacket Canyon is in the northern and eastern part of Canyons of the Ancients National Monument in southwest Colorado. There are only a few established trails in the Monument, an area rich in Ancestral Pueblo ruins sites. 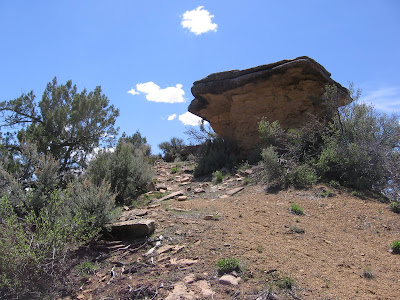 I turned west on County Road X, 1 mile south of Yellow Jacket CO and then turned south on Road 19. About 100 yards south of the junction of county roads W and 19 a spur road leads west for a short distance past some hay barns. There is some room to park along the road and slip through a fence right on the north edge of the canyon head.

I might have briefly crossed over some private land. I talked to someone briefly but they only spoke Spanish. I pointed and said “Canyon” and he seemed to understand and said ok. This area is in the vicinity of the community named Yellow Jacket, north and west of Cortez along highway 491. There is a large Yellow Jacket pueblo site nearby that is located on private land. 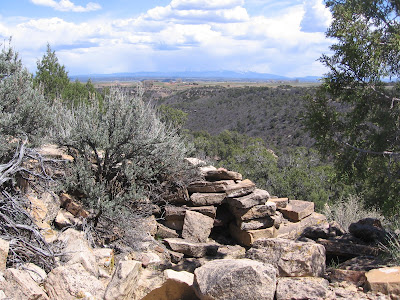 I worked west along the canyon rim, sometimes a little below the rim, for about 0.75 miles and then came to another arm of the canyon head. There is a circular farm pond here between the forest edge and the cultivated fields.

Near the pond, there appeared to be a vague ATV trail leading to the southwest toward a rocky point. The ATV trail passes through a fence and continues. The site I found was on the tip of this rocky elevated point. This site has great views in all directions. There are some rubble piles on the top and down on the east side. The view to the east is back toward the point where I started. 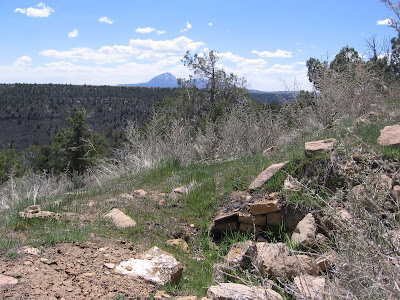 There are some circular depressions on the east side where some wall sections of probably kivas are visible. To the north, Sleeping Ute Mountain is visible. The rubble piles continue down the slope and are somewhat overgrown with sage brush. 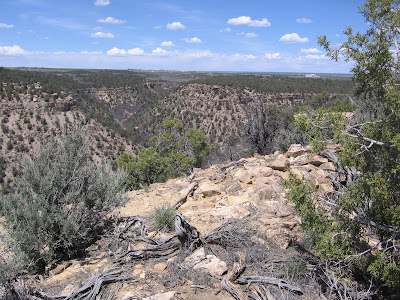 From the elevated point there is a good view further north to two more branches of the canyon head. There is another rocky point between the two branches that looks interesting but also looks harder to get to from where I started.

I explored along the east side of that area but couldn’t see anything definite. It took me about 2:00 hours of looking before I came across this site, and 0:40 minutes to return to my start point, for a total hike of 2:50 hours on a 70 F. day in April.

Posted by Todd Lochmoeller at 5:17 AM