Risley Canyon is a tributary to Yellow Jacket Canyon in the south central part of Canyons of the Ancients National Monument in southwest Colorado. The trail head that I used to explore this area is 3.4 miles north on the BLM road that is 20 miles west of Cortez, CO along County Road G. 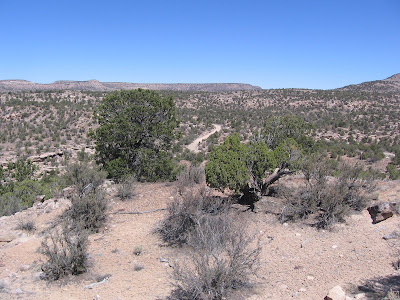 This starting point is high on the south side before descending into and crossing Risley Canyon. It is a little north of the starting points for hikes to Cannonball Mesa and the Lucy’s Warbler habitat area. The road is still drivable along here and there are ATV trails branching off here and there.

The Lucy’s Warbler hike is along the south rim of Risley Canyon to its junction with Yellowjacket Canyon. The terrain along here is Pinon Pine and Utah Juniper canyon country with Mormon Tea, Prickly Pear Cactus and maybe Cliff Rose shrubs. Risley Canyon doesn’t appear to have much water or sagebrush fields nearby. 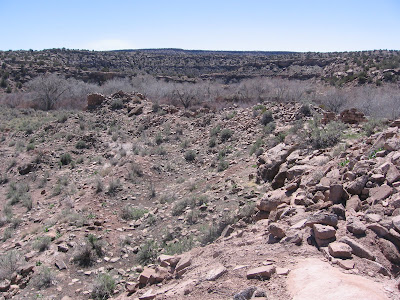 About 1.2 miles further north along the road is a short west leading side ATV trail toward a hill with some south facing cliffs and jumbled boulders. I checked for ruins structures but only saw a few pottery shards. On top of the hill is a rock cairn and a good view into the Yellowjacket bottoms area.

From the hilltop I spotted a large ruins site on a fingertip of rock that extends into the wide sagebrush fields along the flowing creek. There is a vague unmarked trail that leads to the site from the ATV turnoff that I noticed on the return hike. 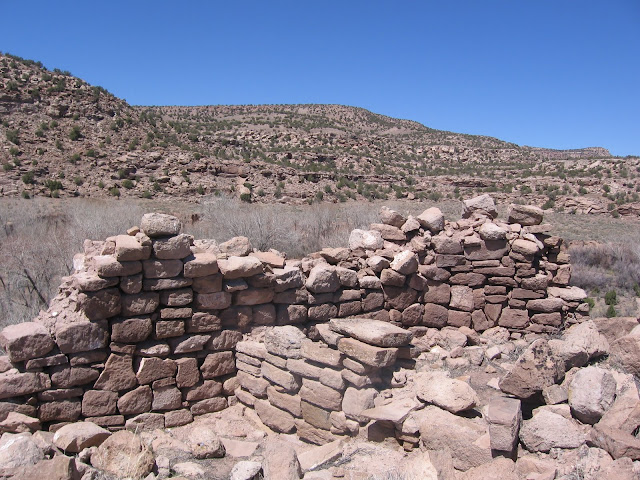 This site is mostly rubble with a few sections of wall still standing. The feel of the site is something like an island. From the highest points of the island, the water flows directly below the cliffs on the north side. The sagebrush farm fields are wide here compared with nearby canyons. The abundant water and wide fields make this a relatively favorable site to live in.

The flowing stream is lined with cottonwood trees. On the north side of the stream about 0.25 miles away, there appears to be an historic ruin made of sandstone blocks. I didn’t try to cross the stream to view it, but it looks like pioneer farmers thought this was a good site also. 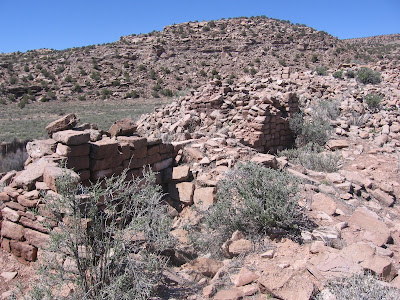 Most of the structures still standing are rectangular. There are two circular depressions on the south facing side that appear to be large kivas. The pottery shards that I saw were either smooth gray or corrugated. I didn’t see any painted designs. There are several vertical rock faces that looked like good potential petroglyph sites but I didn’t notice any rock art at this site.

On the return hike I explored up Risley Canyon a short distance. The walking was easy on a sandy surface. I saw some alcoves but no ruins structures. (There is a good ruins site further than I walked.)  My total hike was 3:00 hours for about 4 miles. I carried two liters of water on a 55 F degree early April day.

Posted by Todd Lochmoeller at 4:15 AM