The Little Ruin Canyon Trail is located at the Visitor Center of Hovenweep National Monument along the south Utah and Colorado border. The 2 mile loop visits at least 10 Ancestral Pueblo Ruins sites, mostly perched along the canyon rims. 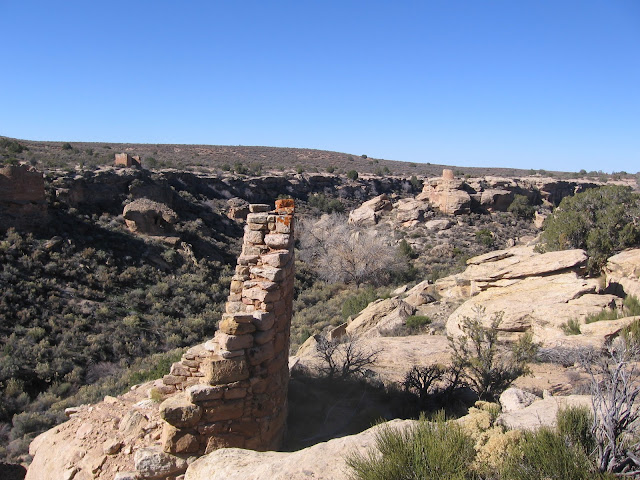 Little Ruins Canyon appears to be dryer and more desert like than most of the surrounding Canyons of the Ancients area. The mesa top area is mostly Sagebrush, Mormon Tea, Cliff Rose, Prickly Pear Cactus, with a few scattered Utah Juniper trees. These plants are identified with small signs on the trail segment close to the Visitor Center. The canyons only a few miles further north are much thicker Pinon Pine and Juniper forest. Most of these plants retain some green color into the fall and winter seasons.

The trail here at the Hovenweep Visitor Center provides more ruin site viewing in a short distance than most trails in the region. The nearby Sand Canyon Trail has many small sites and Chaco Canyon in northwest New Mexico has very large sites. Sun Point at Mesa Verde has many sites visible from one view point. 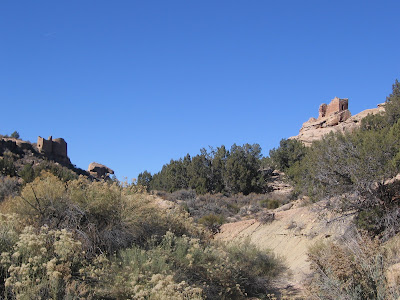 Following the loop trail clockwise, there is an 80 foot descent into the canyon and a climb out the other side. The canyon interior is closed except for special tours. Several of the ruins sites can be viewed from this low angle including Stronghold House, the Twin Towers and Eroded Boulder House. Climb a little higher and Point Tower, Unit Type House, and Rim Rock House are visible. The canyon bottom has thicker vegetation than the canyon rim area, with some Rabbitbrush visible. The canyon head area has some Hackberry Trees. 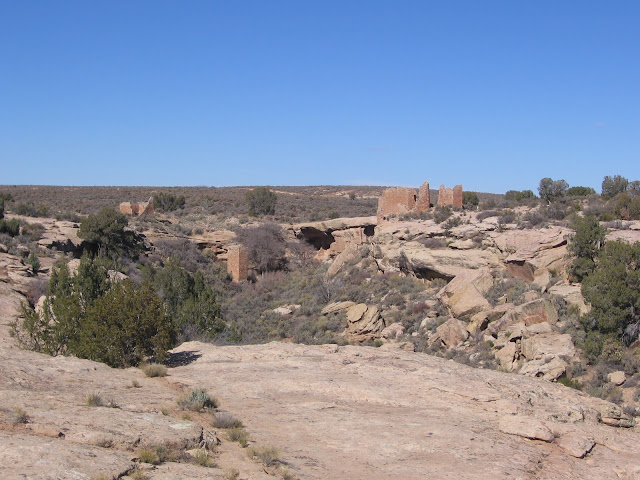 The upper end of the south fork of the canyon head has some of the largest and most impressive of the Hovenweep Towers. Hovenweep Castle across the canyon head is the largest and most impressive. The Square Tower down below the rim is the most mysterious and seems to have been build with slight spiral. It overlooks the spring that provided water for the overall site. 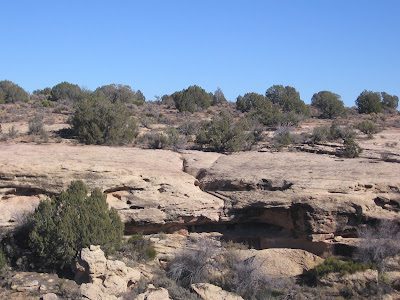 There are a few small structures that aren’t pointed out. From the Tower Point loop segment looking north there are some small storage structures in the shallow alcoves under the rim. In fall, these small storage areas were probably stocked with the produce of the summer season. Another unnamed ruins structure is at the point where the trail begins to descend into and cross the small canyon. This unnamed site would be a major find along the wild canyons of Canyons of the Ancients but is easily ignored here. Looking east, there is a view toward Sleeping Ute Mountain.

The Holly Trail leads from the campground 4 miles north to the Holly Ruins Group, the nearest outlying site of Hovenweep. The Little Ruins Canyon Trail takes 1 or 2 hours depending on how long you linger at each site. I hiked in mid November on a sunny 45 F degree day and there were about 10 other vehicles at the visitor center during my visit.

Posted by Todd Lochmoeller at 7:14 AM