The Hackberry Trail in Hovenweep National Monument along the southern Utah and Colorado border is a the second part of 1.0 mile round trip to two ruins groups, the Horseshoe Group and the Hackberry Group. 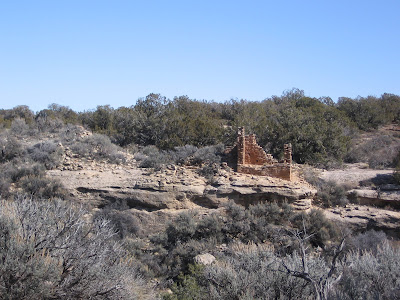 The Hackberry and Horseshoe Trail Head is about five miles north of the Park Headquarters at Hovenweep along paved Road 10, then down a primitive dirt road. The turn off is marked with a small bird symbol rather than a sign.

The Holly Ruins Group is another 0.8 mile down the same dirt road. The first view of the standing structures of the Hackberry Group is from a short spur trail that views across the canyon. There are rubble remains on both sides of the canyon. 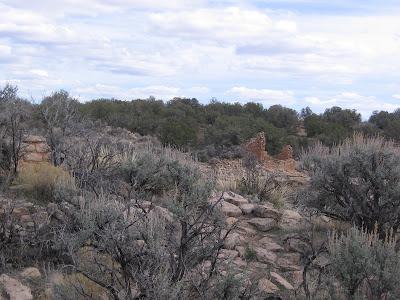 The Hackberry site is a large site with many collapsed rubble pile structures. It is thought to have been one of the largest populations in the Hovenweep area due to the reliable water supply in the canyon. 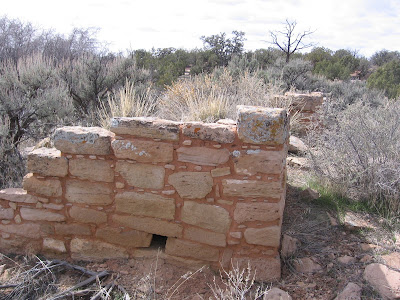 The stone work in this area uses small pieces inserted between the larger bricks. Some places where this style is used are referred to as being Chaco Canyon culture influenced, though the interpretive information at this site doesn't say that. All of there sites were abandoned by about 1300 AD. 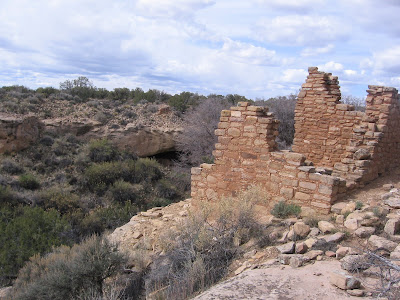 Moving around to the east side of the site, an alcove is visible below the rim with a small structure inside. The way down into the canyon is closed, so it can only be observed from the rim.

From this angle, the Hackberry trees growing in the relatively moist canyon bottom can be viewed. The rim environment is Pinon Pine and Utah Juniper with patches of Sage Brush, Mormon Tea and Prickly Pear Cactus.

Posted by Todd Lochmoeller at 5:46 AM