The Holly Trail is a 4 mile route from the Hovenweep National Monument campground to the Holly Ruins Group. There is a north access about 5 miles north of the Visitor Center on County Road 10, then about 1 mile along a rough road. The Horseshoe and Hackberry Trail is along the same side road. 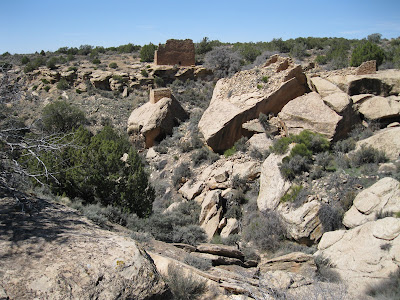 At the north trail head, the main trail travels along the west rim of the canyon, but there is an unmarked trail on the east side that provides some different views. 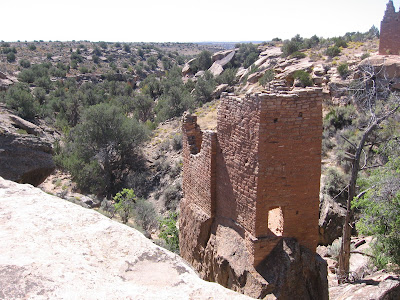 Starting at the north end of the trail one of the most impressive ruins is Boulder House, perched on a large sandstone boulder in the bottom of Keeley Canyon. It was apparently built from the inside, rather than using scaffolding on the exterior. 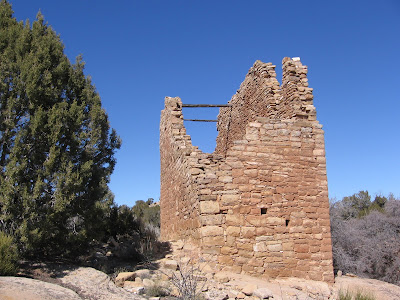 Just past Boulder House is another large structure sitting on the rim rather than on a boulder. The trail guide doesn't mention a name for this large building. Sleeping Ute Mountain is visible in the distance. 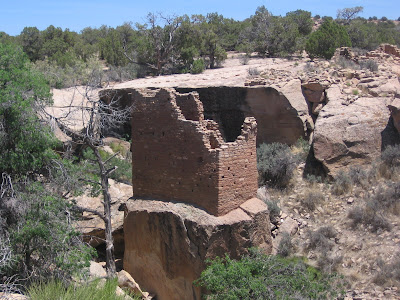 Several of the other ruins here seem to also be perched on boulders in the canyon rather than use the canyon rim. Extensive rubble piles spill down into the canyon.
Just past the Holly Ruins Group there is a short side trail leading to what is thought to be a Solstice Panel. There is a natural rock portal that allows a beam of morning sunlight to strike a series of petroglyphs. 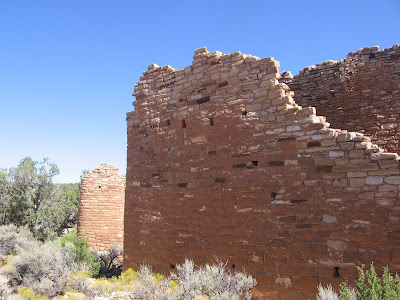 Past the Holly Group of ruins the trail continues along the rim of the canyon and then descends to the bottom, cutting through a narrow gap in the rim rock. The trail in the creek bed below didn't seem very interesting to me. The terrain changed from Pinon Pine and Juniper forest to a sagebrush area and there are signs that cows graze in the area. There was one collapsed ruin along the banks of the dry wash. This seemed to be an unusual location as most of the other ruins were located on the rim or on big boulders.
At the south end of the trail there is another narrow crack to squeeze through climbing back to the rim. The trail arrives in the park campground, then connects to the Little Ruin Canyon Trail at park headquarters.
Posted by Todd Lochmoeller at 6:04 AM