McLean Basin is a wide canyon area on the southwest Colorado and Utah border in Canyon of the Ancients National Monument. This is a find it on your own National Monument with very few official trails.

The McLean Basin area has some relatively well known and elusive Ancestral Pueblo towers that I’ve been searching for. 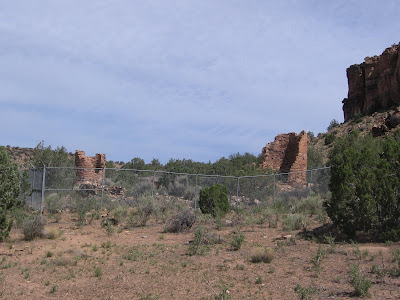 I started this hike 0.5 miles down road 4720 at a pull over point where the road veers close to the basin rim and there is a primitive camp site. I’ve called this road the McLean Basin South Rim Overlook Trail and it leads to the large Pedro Point Ruins site at about the 3 mile point. This west leading road is about 1 mile south of the turnoff for the Painted Hand Trail in the vicinity of the outlying Hovenweep National Monument sites.

Hiking to the edge of the basin rim at this point at scanning with binoculars I spotted two towers across the basin on the north side below and to the left end of some large sandstone cliffs. It is about a 2 mile rim to rim hike to get over to the elusive towers. The cliffs are a good navigation aid as it is not a straight shot across the basin. I took a good look over my shoulder at the route down so I would recognize the way back. 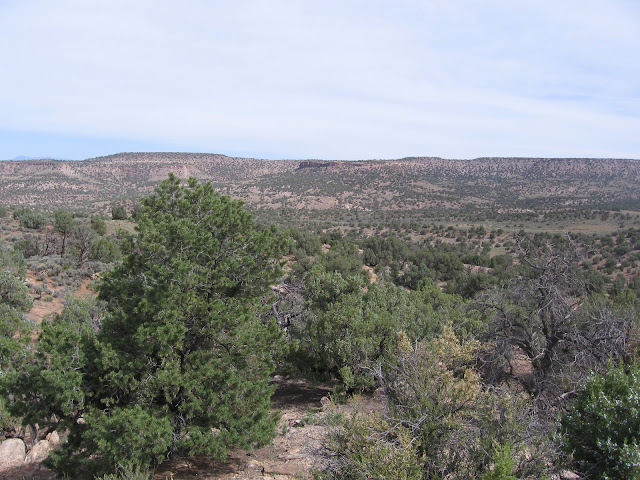 There is a layer of cliffs near the rim to get past while descending into the basin. In the area where I started there are two drainages that offer routes down. I looked at both and chose the eastern most drainage. On the return hike I noticed a hikers trail about half way between the two drainages, but it is not marked and only starts at the edge of the cliffs, so it may be hard to find. Below the cliffs the slope is easier.

In the eastern part of McLean Basin there are inner canyons that aren’t visible from the rim. There are cow paths and some road segments that can be helpful but you still have to pick your route. The cliffs above the towers go out of sight at the bottom of the basin. The cliffs to stear by are in the middle of this view. 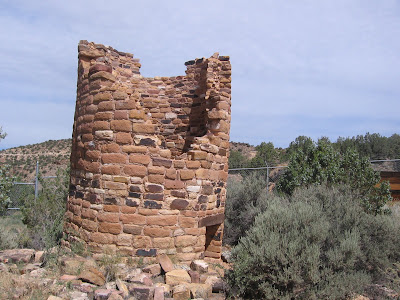 There are two tall towers inside a protective chain link fence. The fence has a gate that is secured but not locked and there is a sign that gives a little interpretive information. As I got closer to the site I found a rough 4WD road that leads to the site and continues past.

The southwest tower appears to be more complete than the northeast tower and has a band of darker rock part of the way up. The Jesse Fewkes report on this site from long ago describes a rectangular overall site with these towers at two of the corners. The walls that he mentions aren’t very visible now. 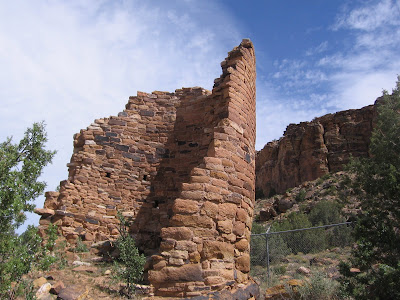 The northeast tower appears to have a larger diameter but there is more of it missing. It is built on a boulder and sticks up higher. It is also constructed using some of the dark surfaced stones but they are more randomly placed. 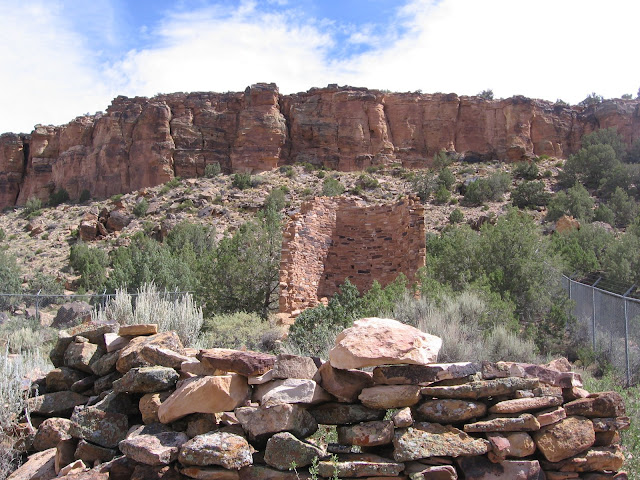 In the southeast corner of the site there is a circular dry wall structure. From this angle there is a good view of the cliffs behind the towers that I used to navigate to the site. Outside the fence there are some other ruins remnants, but nothing like the two towers. I kept an eye out for other sites along the way, walking over many high points and scanning around but didn’t see anything else. 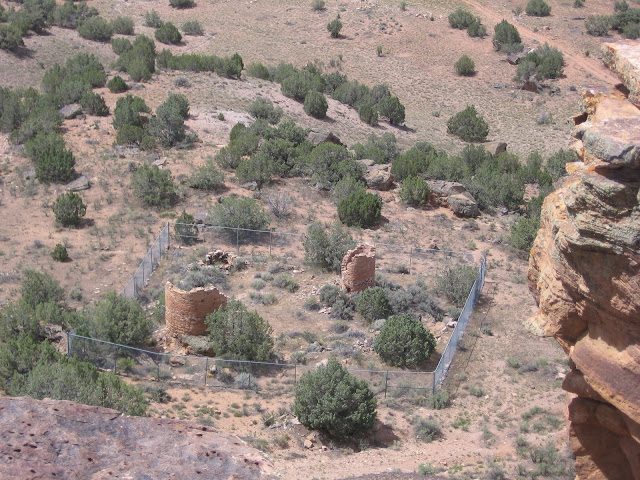 The 4WD road continues to the top of the cliffs and beyond, allowing a higher view of the area. From above there is a good view of the arrangement of the site and the surrounding area. I didn’t see any sites up on top or see any more sites nearby.

It took me 1:15 hours to hike to the elusive towers site and my total hike was about 3:50 hours for about 4 miles. It was a relatively cool mid June day of about 70 F with thin clouds and some breeze that kept the heat down and the biting gnats at bay. I carried 2 liters of water and drank most of it.

Posted by Todd Lochmoeller at 5:57 AM