Lowry Ruins is a large Ancestral Pueblo ruins site and a main attraction in Canyons of the Ancients National Monument in southwest Colorado. It sits on an elevated site between the two forks of the head of Cow Canyon.

Near the parking area there is a dirt road leading south that offers a route for exploring Cow Canyon. Canyons of the Ancients has many small ruins sites but it is a find it on your own park. 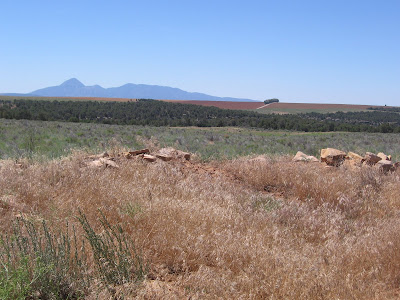 The dirt road runs for about 1 mile with Pinon Pine and Utah Juniper forest on the east and a grassy sagebrush field to the west. About 0.7 miles along the way there are at least two small rubble pile ruins sites in the grassy area. They can be clearly spotted from the road.

Both the sites I saw had survey pins with site number tags attached. These two sites are small and it’s hard to see anything, but it’s good to find these early in a hike that doesn’t have a definite destination. Continuing on the dirt road until it reaches the forest edge. I made my way to a rocky point that overlooks the east fork of the head of the canyon. 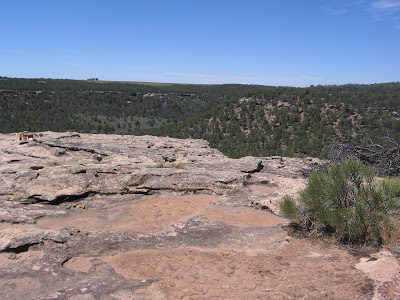 I scanned the canyon rims and the bottom area and noticed that there are a few cottonwoods growing along the creek bottom and an area of sagebrush on the canyon floor as it swings to the west. I couldn’t see any Ancestral Pueblo ruins sites from the view point. There is a short side canyon on the west side of the point that is easy to get around and continue along the west rim of the Cow Canyon east fork. 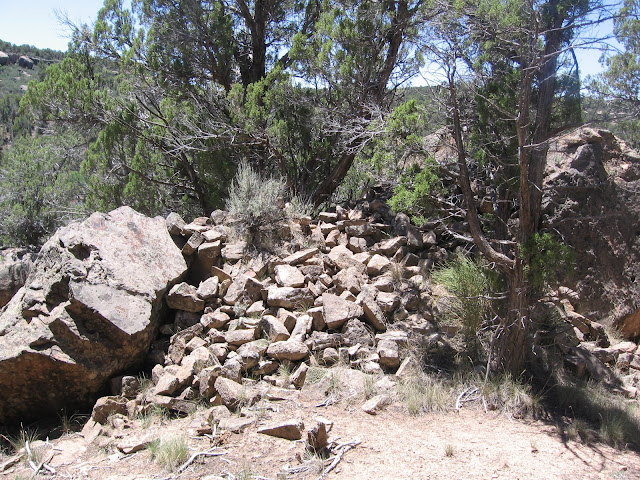 There aren’t any trails to follow here. I walked through the mostly open forest looking for points along the rim that offered good views. About 0.5 miles further on I saw a rubble pile near the canyon bottom, close to the middle of the large sagebrush field that was visible from the lookout point.

The top of the canyon is mostly steep cliffs but there are many notches and gaps to get through the cliffs onto the gentler slope of the canyon side. This site used some large boulders as a foundation and seemed to be reasonably large, extending down the hill for a ways. 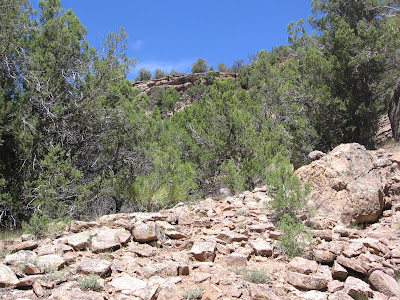 There weren’t any wall sections holding together here except for a short section that used large stones. This site is on a shelf that is well below the rim but above the canyon floor, and well above the creek. This site was visible from the rim right above it, but would be hard to spot from any other angle as the trees hide it.

Hikers approaching along the canyon floor would have to be looking into the forest area carefully. It is in the portion of the east fork that runs east and west for a short distance. 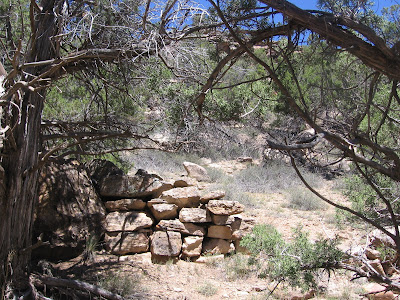 Since I was already down in the canyon I decided to return along the bottom rather than retrace my steps. This was a good idea but I made a navigation error and climbed out on the east side rather that the west side, fooled by a small side canyon to the east.

When I reached the top, I could see the protective structure of Lowry Ruins and headed north for it, but was surprised when I reached the east fork canyon again. The bright side of this mistake was that I came across the remains of an old log cabin down below and was able to see the east fork of Cow Canyon from another angle.

I found a cow path that led back down and then up and crossed again. It took me about 2:00 hours to find the Cow Canyon east fork site and 2:00 hours to return for a 4:00 total hike for about 3.5 miles. It was an 84 F early July day with a good breeze blowing and I carried 2 liters of water.

Posted by Todd Lochmoeller at 5:41 AM