The Sand Canyon Trail is a 6.5 mile north and south route in Canyons of the Ancients National Monument in southwest Colorado. It runs along the west side of Sand Canyon passing at least 14 Ancestral Pueblo Ruins sites. There is an unpublicized trail on the east side of Sand Canyon that allows access to several more sites. However, in 2011 I think this side trail is considered closed. 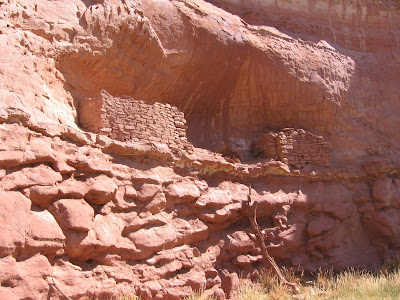 I started my hike at the South Trail Head, located about 12 miles west of Cortez, CO along County Road G. I walked about 3.3 miles north, skipping past the Castle Rock Pueblo and the 10 ruins sites that are easy to visit along the short spur trails. At the point where the trail actually dips into the canyon bottom, there is a small sign that says “Sand Canyon.” The East Sand Canyon Trail takes off to the east in the vicinity of the small sign, but there is no marker. It looks like this is a horse trail.

On a previous hike that I called “Sand Canyon East Rim Exploring” I had started at the North Trail Head and climbed out of the canyon bottom a few hundred yards north of this point onto the shoulder where there is a drill hole service road. The East Sand Canyon Trail allows a close up view of the sites that I had previously viewed from a canyon rim above.

The East Sand Canyon Trail turns back south and passes by three side canyons that hold small ruins sites. The trail is on the shoulder above the canyon bottom, just as the main Sand Canyon Trail is. The first side canyon is the one that I had viewed from above previously and has five sites, all in south facing alcoves. The trail doesn’t go directly past these sites and there isn’t a spur trail that I could find. The first site is one that I called the 5th site when I viewed them from the upper end of the side canyon. 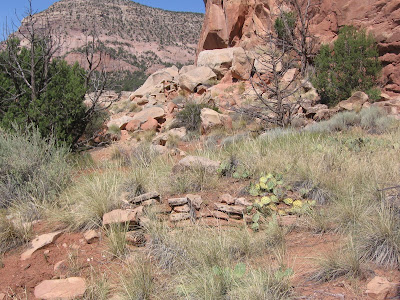 The fifth site has the most material still standing, and there are some circular wall sections in the area in front of the alcove. The nearby 4th site has two short sections of wall remaining. The 3rd site is mostly just the alcove with some rubble piles. 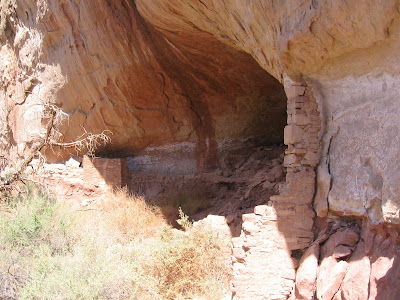 The 2nd site is the second best of this group, with an intact small structure to the left and some wall fragments on the right. There is some rubble in the middle in the middle of the alcove. 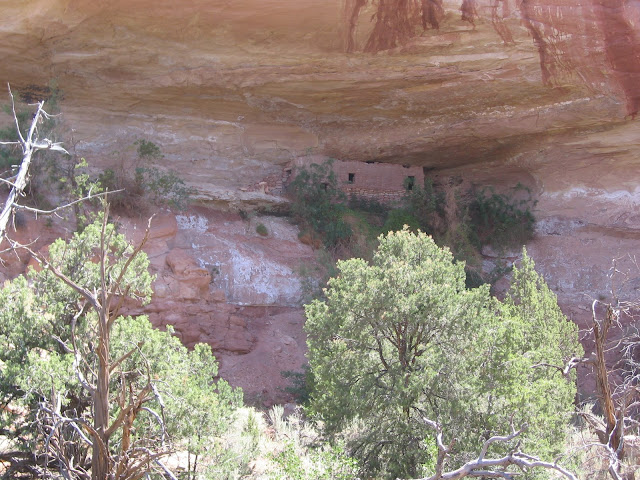 The main East Sand Canyon trail continues to the south to the second of three side canyons. The second side canyon had one site. This one is the most visible when scanning with binoculars from the main Sand Canyon Trail.

It sits up high with steep slopes in front. I looked around for an easy way up but didn’t see one so I just viewed from below. All of the vegetation made it hard to get a good angle for a close up picture. From below, it looks like this site is the best preserved of any of the small sites in the Sand Canyon area. 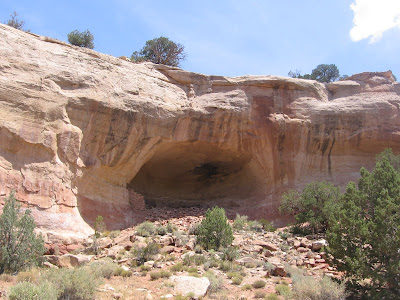 The third side canyon also has one alcove site. From the distance, it looks like there is only a small wall section standing on the left. This site is easy to enter and is more interesting from the inside. 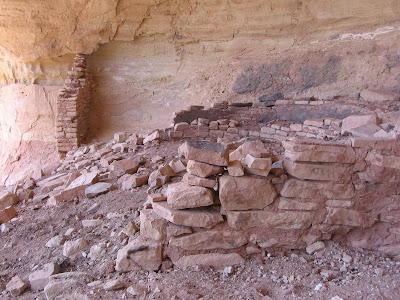 There are several low walls on the inside and the cool shady inside of the alcove was pleasant to sit in as the summer afternoon heat built up. As I was sitting there resting I noticed a petroglyph on the left side wall outside the alcove. 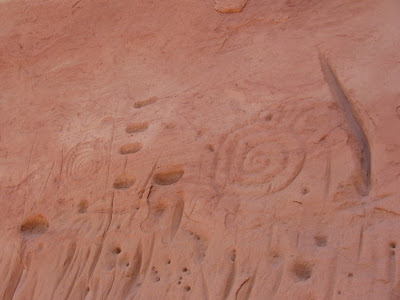 The petroglyph was only two spirals and some sharpening notches, but there aren’t many petroglyphs in the Canyons of the Ancients area. The Holly Group in the Hovenweep area has a solstice panel and there is a large panel near Ismay, but those are the only other two that I know of.

It took me 3:30 hours to get to the third side canyon petroglyph site. From here a hiker can either retrace back to the trail head or continue south on the drill hole road that runs along the east side of this side canyon.

I took the drill hole road, but it eventually leaves the Canyons of the Ancients territory and passes through private property. It reaches County Road G about 0.5 miles east of the Sand Canyon Trail Head. My total hike for about 8 miles and 6 ruins sites took 5:15 hours. It was 70 F degrees at 8:30 AM in mid July and mostly cloudy with some breeze but cleared off and was about 90 F at 1:45 PM when I finished. I carried 3 liters of water and drank it all.

Posted by Todd Lochmoeller at 3:16 PM