One of the important plants one sees along the trails at Mesa Verde and elsewhere in the Four Corners is the Yucca Plant. Among the ancient products made from the Yucca are sandals. A few examples of this ancient footwear are exhibited in the regional museums. 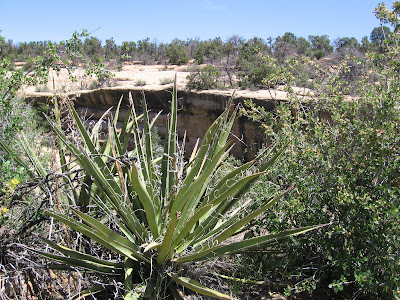 The Trail Guide for the Nordenskiold Ruin No. 16 Trail on Wetherill Mesa at Mesa Verde has the most extensive description of the biology and uses of the Yucca plant, but that trail was burned so severely by recent forest fire that hardly anything is growing there.

The Knife Edge Botany Trail that starts at the Morefield campground area and tours the north Mesa Verde escarpment doesn’t mention the Yucca plant. The Petroglyph Trail Guide discusses the Yucca at stop No. 30 on the return leg along the mesa top. It is also identified with markers in the area near the Chapin Mesa Museum overlooking Spruce Tree House. 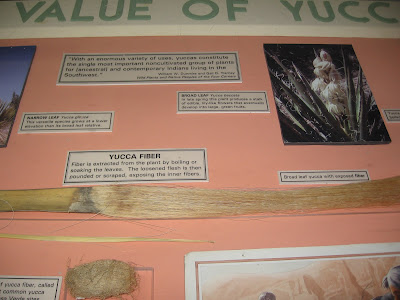 The Yucca plant was used to make cord, ropes, belts, snares, blankets, and sandals. The fleshy leaves were harvested with a stone knife. Then the leaves were roasted and peeled to remove the outer plant tissues. Next, the fibers were separated by pounding the heated leaves, and these were twisted into strands.

The Aztec Ruins Museum has a display showing how a bone tool was used to remove the fleshy pulp and expose the fibers inside. The display says individual strands were twisted clockwise and groups of strands twisted counter clockwise, probably one of your little known facts.

Shampoo was made by pounding the roots into soap. Foods and syrups were made from the Yuccas blossoms and large pod fruit. Blooms appear in May and June and are a favorite food of mule deer. The Yucca fruit is about two inches long and 0.5 inch in diameter with a cylindrical shape. It starts out green and ages to brown and then gray. The fruit is described as tasting like summer squash and the blossoms taste like lettuce. 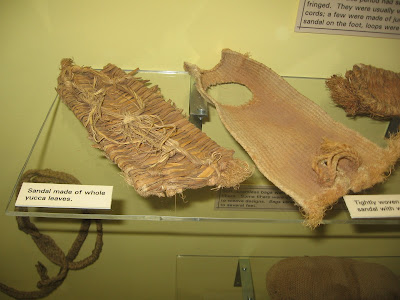 There are many species of Yucca and they hybridize making identification difficult. The Yucca has a relationship with a small white moth that both depend on for reproduction. I’ve noticed that in the burned area leading to the Cliff Palace Loop that the Yucca plants either survived or have grown back quickly. During the winter season, the only green in the area is the Yucca plant. 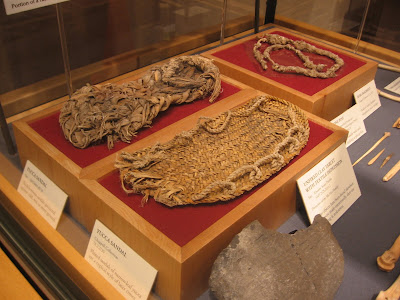 The Anasazi Heritage Center near Dolores, Colorado has a pair of Yucca sandals side by side. The example to the left appears thicker than the lightweight model to the right. I’ve been wondering how the Pueblo people coped with the heavy snow that is possible in the region, but apparently there was a variety of foot wear available.

The Aztec Ruins museum has some examples of sandals also. The Heritage Center also has a dissecting microscope display featuring a comparison of the Yucca fiber side by side with cotton fiber.

Posted by Todd Lochmoeller at 6:34 AM