Lowry Ruins is one of the few easy to visit sites of Canyons of the Ancients National Monument in southwest Colorado. In the winter, the site can still be visited but bring your snowshoes. 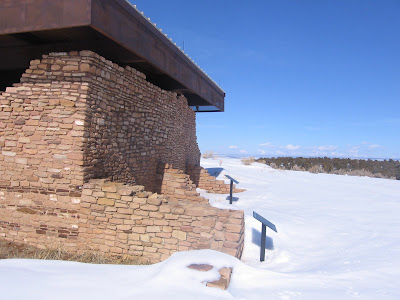 County Road CC is cleared west of Pleasant View, Colorado but the driveway into the parking area and the trail to the ruins is not cleared of winter snows. It is about 0.25 miles of snow shoeing to get to the ruins area.

Lowry Ruins sits on a slight hill top with views of the sage plain area surrounding and all of the regional mountain ranges are in clear view. During my visit, it looked like a snow mobile had made a visit but there were no foot prints around the ruins site since the heavy snows of about 10 days before. The snow at the site appeared to average about two feet of depth. On a 30 F degree sunny day the snow surface was crusty and I didn’t sink in except for a few spots. 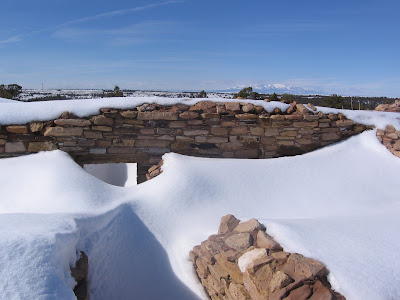 The interpretive information at Ancestral Pueblo sites doesn’t say anything about how the residents here would deal with heavy snows. It looks like snow drifts could build up high enough to block the low level doorways. Many of these structures had openings in the roofs with ladders, but how would that work if there was three feet of snow around the opening.

The farming areas are thought to have been worked with digging sticks, but I haven’t seen any mention of snow removal sticks. We mostly visit these sites in the warm months of the year and don’t consider the problems of winter survival. How many of these rooms were for storage of firewood and food for the times when conditions might be difficult for weeks. 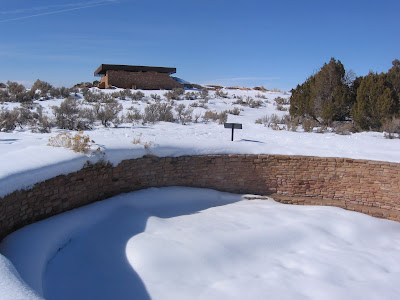 The interpretive information at the site says that the Great Kiva at Lowry is considered to be a feature that drew residents to this site over several generations. It was a relatively early structure here, but there isn’t any comment as to why it was so attractive. The Lowry site is at a higher elevation than the pueblo sites in the Hovenweep area 20 miles to the south. The winter snows are deeper at Lowry and take longer to melt in the spring.

A large kiva like this seems to be a valuable feature for a community. It is big enough to accommodate a large group and has the earth contact and insulation features that might make a long winter more comfortable.

I spent about 1:30 hours on this visit on a comfortable winter day. I read at the Anasazi Heritage Center that some of the building stones at Lowry have petroglyphs inscribed similar to several that were found at the Escalante Pueblo. I circled around the site three times looking for them but didn’t spot any this time.

Posted by Todd Lochmoeller at 5:56 AM