The Little Ruin Canyon Trail is located at park headquarters for Hovenweep National Monument near the south Utah and Colorado state line. Most visitors arrive here during the mild portions of the year but the many mysterious towers can also be viewed during the snowy winters. 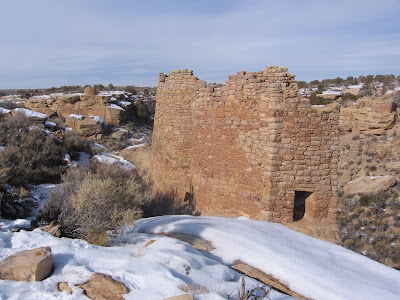 The circular, square, and D shaped towers, like the Twin Towers, are mostly perched along the canyon rim. This area is one of the best ruins viewpoints in the Four Corners as there are 10 sites to see within the 2 mile loop. The Hovenweep area received about 4 inches of snow while nearby and higher elevation Mesa Verde received nearly 2 feet during the same period.

The sidewalk leading to the trail head was cleared of snow but the trail itself required careful walking with a few icy spots. Temperatures since the snowfall have stayed mostly below freezing. During the mild seasons of the year we often forget how difficult survival in this region must have been. 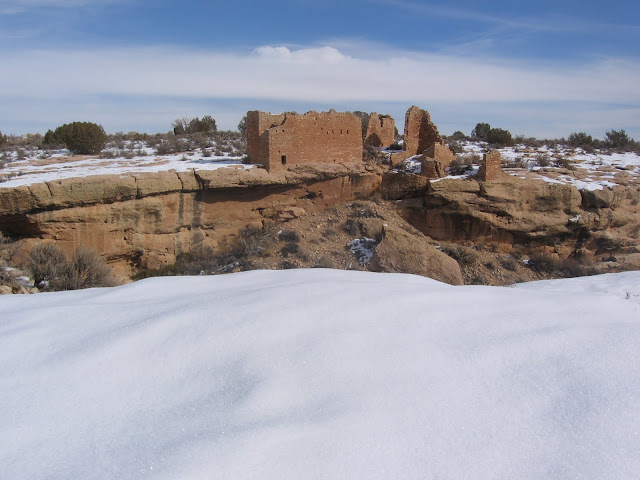 The Hovenweep Castle is one of the most spectacular ruins in the region, a complex of two D shaped towers. The stone walls are two or three courses thick and dating of the wood used show a constructions date of 1277, a relatively late time in the history of this culture. The south facing canyon below the rim is cleared of snow while the north canyon rim still has a thick layer.

The Hovenweep Castle overlooks the area where a spring provides water for the site. Large Hackberry Trees benefit from the moist conditions. 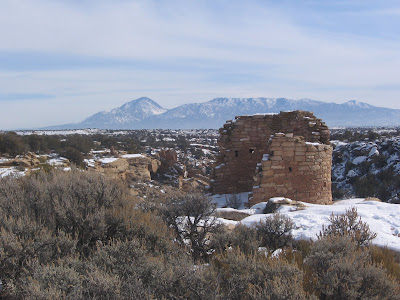 Tower Point sits at the junction of the two canyon heads and has a commanding view down the canyon toward Sleeping Ute Mountain. The function of towers is not well understood, but this one clearly looks like a lookout point. There is supposed to be a pictograph somewhere below Tower Point. The trail up the canyon bottom is normally closed to visitors but rangers may lead hikers occasionally during the summer, based on demand.

I spent about 2:00 hours walking along the rim here on a 28 F mid January day, about two weeks after the most recent snow. The roads were mostly clear leading from the Cortez, CO area, a few patches of ice in spots that were always shady. I didn’t attempt to cross the canyon at the east end of the trail, but did an out and back counter clockwise hike from the trail head around to the Twin Towers and back.

Posted by Todd Lochmoeller at 10:37 AM