Pottery Shards on the Trail

On most of the hikes in the Canyons of the Ancients and other lightly visited areas pot shards will be visible. Sometimes hikers will make small displays of shards found. Studying these and other artifacts is encouraged but moving them from where they are found is usually discouraged. 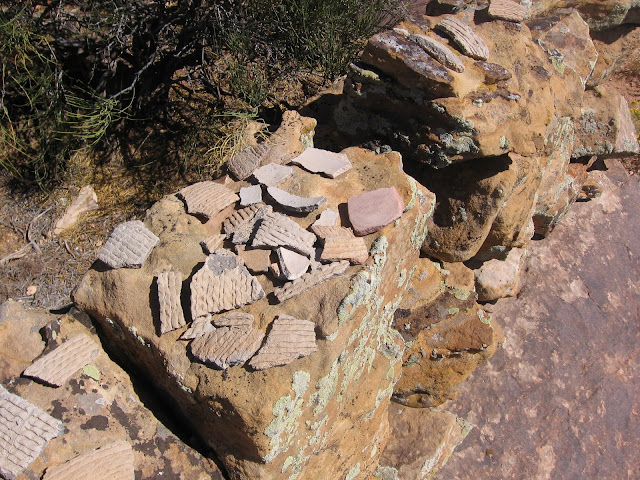 The Anasazi Heritage Center near Dolores, CO acts as the visitor center for Canyons of the Ancients and has some good displays of pottery with some interpretive information to help understand the styles that might be observed along the trails. 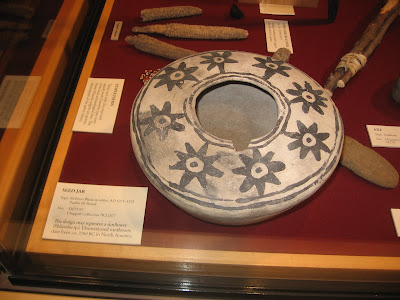 The last groups of people living in the Mesa Verde area made pottery that are now called McElmo Black on White and Mesa Verde Black on White. Both types are thicker with more elaborate decoration than earlier types. The McElmo type is most common between 1150 and 1200 AD. It shows bands of triangles, checkerboards, steps and hatched areas.

Bowls are usually painted on the insides only. Looking at the examples in the Heritage Center, the McElmo Black on White had a more faded look to them. They are slightly older on average, but that may be a coincidence. 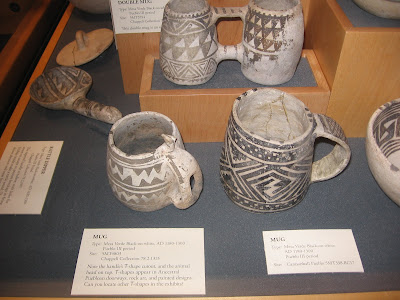 Mesa Verde Black on White is most common after 1200 AD. It has heavier designs with more black spaces, placed in segments. Bowls are decorated on both inside and outside. During this time pitchers became less common with mugs becoming more popular. No interpretation of the development of mugs over pitchers is offered, but that fact set off my imagination some. There seemed to be more examples of Mesa Verde Black on White in this collection. There is a good display of three mugs side by side.

The one of the left is notable as it features a T shape cut out in the handle, similar to some of the doorways and rock art found in the area. The doorways at the Escalante Ruin site on the hill above the museum are T shaped. Extra thirsty drinkers might like the double mug up above, though It seems like drinking from one side would cause spilling of the other side. 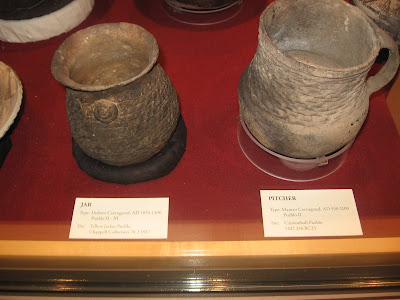 The Heritage Center has examples also of earlier Black on White styles are named the Cortez and Mancos. The Cortez style dates from 875 to 1050 AD and features interlocking scrolls, scalloped and ticked solids and fine lines. Also, string of pearls designs are found. 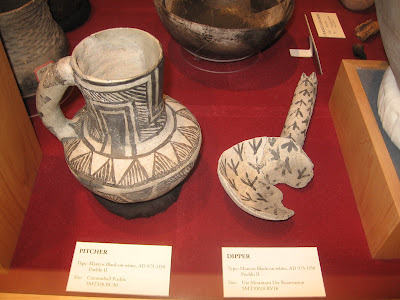 The Mancos style dates from 975 to 1150 and has triangles hanging from the bowl rims, vertical lines from the rim, and hatching with straight lines or squiggles. Without a lot of practice it might be hard to distinguish these styles from each other based on a single broken piece, but Black on White should be clear. 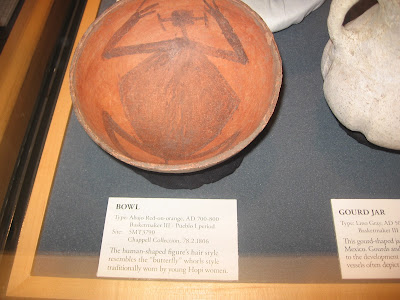 In the museum there are also some examples of pottery with three or more colors called Polychrome and some Red and Orange colored pottery. The southeast Utah area was the center of Red Ware pottery and the examples found closer to Mesa Verde are thought to have been traded into the area. 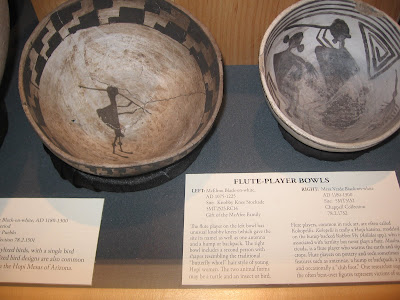 I thought the most interesting pottery display in the Heritage Center was the side by side of two flute players. The bowl on the left is McElmo style and Mesa Verde Style is on the right. Flute players are often called Kokopellis but the interpretation is more complicated than the popular culture recognizes. I haven’t seen any flute player rock art in the Mesa Verde or Canyons of the Ancients area, though there are many to find in nearby Utah.

The left side bowl is identified as being from the Knobby Knees Stockade, which I think is on Cahone Mesa in an area that was supposed to receive water from the McPhee Reservoir Project. It is somewhere in the vicinity of Lowry Pueblo. Many of the pots on display list the site where they were found, and some of these sites are within the Canyons of the Ancients and can be visited. 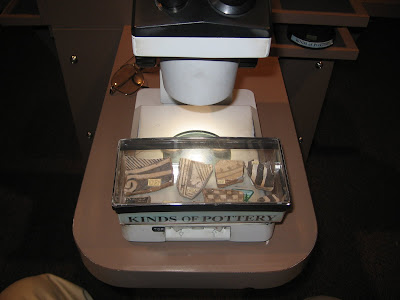 A station in the museum has four dissecting microscopes set up with samples of pottery and other artifacts for a close examination. There are several boxes of samples to look at with interpretive information built into the samples. Very small signs are embedded in the sample cases to explain what you are looking at.

It is a very creative exhibit and I haven’t seen anything similar at the other regional museums at Mesa Verde, Aztec Ruins, or Edge of the Cedars. Some of the features pointed out are the type of temper material added to the clay to prevent cracking. Studying these tiny grains provides clues to when and where the pottery piece was manufactured. The types of paint used can be distinguished under the microscopes also. The subtle differences between vegetal and mineral based black paints are among the examples. 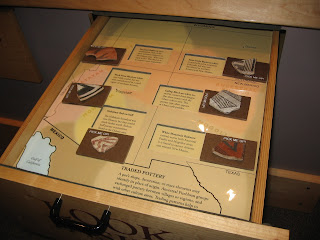 Another exhibit where pottery pieces can be handled is an unnoticed drawer below one of the cases of whole pots. The display shows some of the regional styles represented as broken pieces as a hiker might find them. These different styles could be found anywhere due to trade.

One of the questions posed is was it the pottery that was traded or was it the contents of the pot.  Some time spent in the Anasazi Heritage Center might inspire the desire to examine these pieces in the field and leave them there for others to do the same. 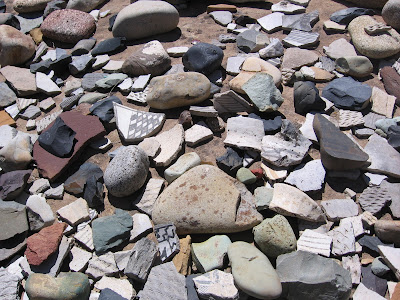 One area where there are numerous pot shards visible is in Ute Mountain Tribal Park, particularly in the Mancos Canyon portion of the full day tours. All visits to Ute Mountain Park are guided and visitation is light, so the shards have remained mostly in place. The guides don’t seem to object to the creation of small displays of interesting shards as others sometimes do. The Kiva Point short trail and the Red Pottery Village have an overwhelming number of pot shards to view.

Posted by Todd Lochmoeller at 11:35 AM