Two more large but lightly visited sites are on Cannonball Mesa and in Woods Canyon, both parts of the relatively new Canyons of the Ancients National Monument. 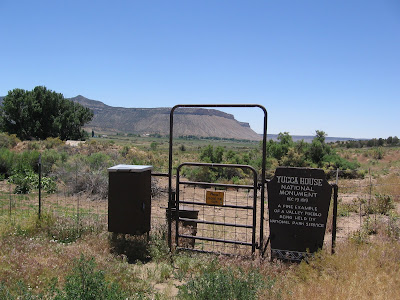 Yucca House was accepted as a National Monument in 1919 and has remained unexcavated the whole time since then. For visitors, it is somewhat difficult to visit as it remains as large rubble mounds overgrown with greasewood without any development for visitors. The area surrounding the site today is used as agricultural land that looks like it might be more productive than the areas on top of Mesa Verde.

The Yucca House site has obvious green marshy spots where springs still bubble to the surface. The setting is interesting as it rests in the shadow of Mesa Verde and may have been visible from the west rim area.

Mesa Verde may appear as an island of cultural development, but the valley areas below were also populated in ancient times. There are isolated preserved sites in the areas away from Mesa Verde but modern development has mostly obscured the remains of that civilization. 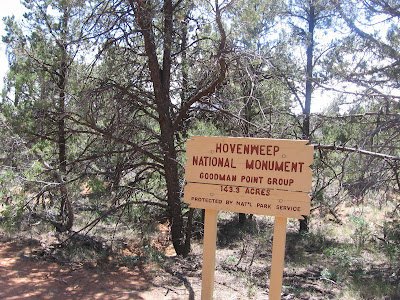 The Sand Canyon area has well known trail system that leads to many small ruins sites. Goodman Canyon is the next canyon to the east. At the head of Goodman Canyon is a large ruins site that is one of the outlying Hovenweep National Monument sites. Like most of the canyon head locations there is a spring providing water.

It was the first site to receive Federal protection when it was withdrawn from homesteading in 1889. There are no visitor facilities at the Goodman Point Unit and no signs pointing it out. For a visitor, there are some paths to follow and there is some current excavation with some peeks into trenches and piles of collected sandstone bricks. The short brochure says there are 42 different sites to find here, but I think it will appear to most as one very large site. 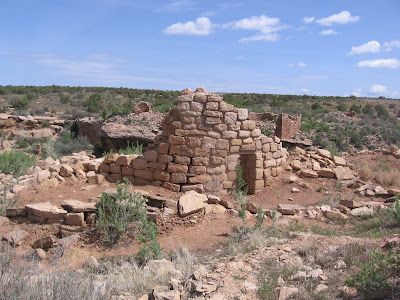 On the southwest side of the Canyons of the Ancients Monument area is the large Cannonball Mesa site that seems to receive little attention for such a large site. It is relatively easy to hike to and has a number of still standing walls. The terrain has fewer trees than Mesa Verde and most of the rest of Canyons of the Ancients. Like Goodman Point, the site is at the head of a canyon with a water source trickling out of the canyon wall. 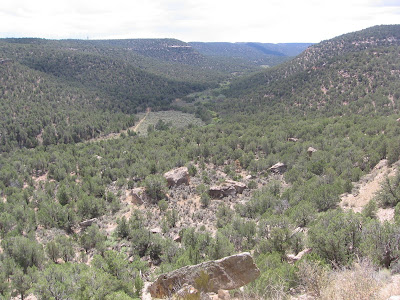 The Woods Canyon Pueblo site seems to have been chosen as an example of a canyon rim living site to develop into an educational unit for schools.  It seemed to me that after studying the site in school, the students might want to actually see it, but it looks like a difficult location to bring a class of students.

Logistics of visiting aside, the site is arrayed on a somewhat steep slope above a creek that has year round water and farm fields. Most of the structures are rubble piles with a few intact wall sections near the canyon rim. Most of the area is obscured somewhat by the Pinon and Juniper forest. There are some examples of the use of large boulders as foundations for perched buildings.

Posted by Todd Lochmoeller at 9:56 AM