The Painted Hand Pueblo Trail is one of the few publicized trails in the Canyons of the Ancients National Monument in southwest Colorado. The trailhead is along the marked east turn off of County Road 10 about 10 miles north of the Visitor Center for Hovenweep National Monument. 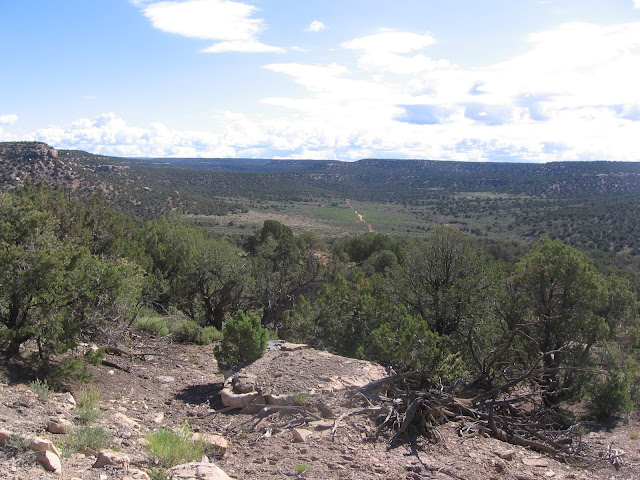 Further along the same rough road is the upper trailhead for the Cutthroat Castle Trail, one of the outlying Hovenweep sites. Just south of the trailhead there is an old road that leads down into Hovenweep Canyon and heads north, following parallel to the creek bed and passing the area below the Painted Hand Pueblo site. The Canyons of the Ancients doesn’t have many official trails but there are many old roads to follow while exploring this outdoor museum. 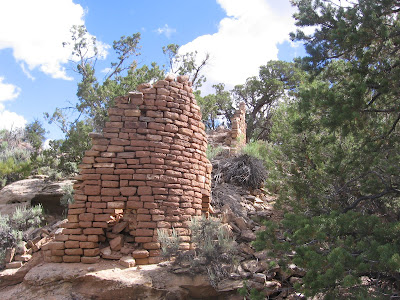 I started my hike at the Upper Cutthroat Castle Trail Head and followed the rough road down into the sagebrush and greasewood canyon bottom area. After passing below the Painted Hand Pueblo, I noticed a possible collapsed boulder based ruins site about 0.2 miles further north, but continued on.

After about 1.5 miles, the trail crosses the dry wash and continues north. About 50 yards past the wash crossing I turned east off the trail and started climbing toward the mesa top area that is between Hovenweep Canyon and Negro Canyon. I was surprised to see a fairly large south facing ruins site about half way to the mesa top. Part of a circular tower similar to the Painted Hand tower stands out from a distance. 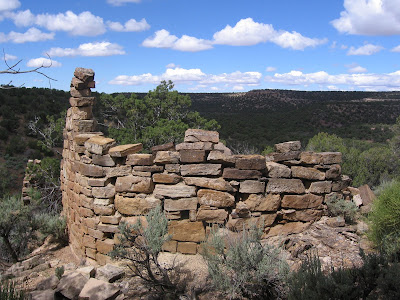 There are several structures with wall sections still standing. The site is north and east of the Painted Hand site, about 1 mile away. The vicinity of Painted Hand is visible but I couldn’t see the site for sure. I could see the collapsed site that is just to the north of Painted Hand. 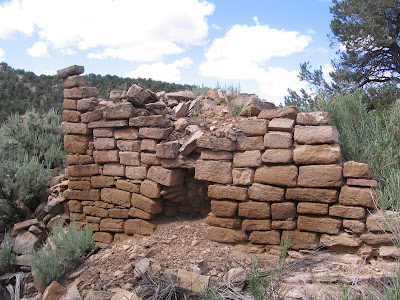 Like the other Hovenweep area sites, this site seemed to have several towers with a mix of square, circular and perhaps a D shaped. There are large piles of rubble here also, but the site seems very compact. It also looks like there are some perimeter walls at the rim but I didn’t see any structures on the area above the rim. I didn’t see any trails nearby or evidence that this site gets visited very often. 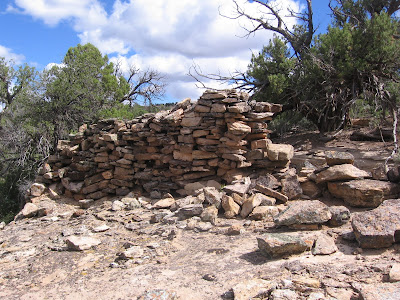 My original hiking goal was to get to the mesa top and continue to the rim of Negro Canyon and explore the area. I was lucky to stumble on this large site. It took about 1:00 hour to reach this very good ruins site. 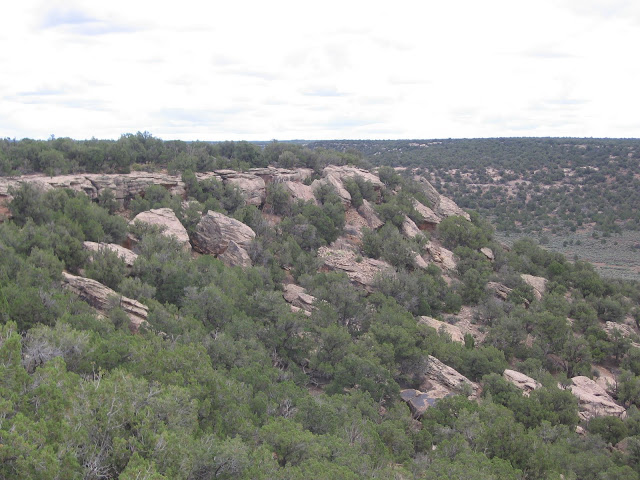 It was a short walk across the mesa top between Hovenweep and Negro Canyons. From the west rim of Negro Canyon I could see a green tank and there is a dirt road running along the canyon bottom. Across the canyon on Mockingbird Mesa I could see two of the Carbon Dioxide facilities and the large power lines. I scanned along the far canyon rim with binoculars but didn’t spot any ruins structures.

There was one boulder based collapsed ruins site below the cliffs near the point where I first arrived at the rim and also a circular petroglyph that was visible in the same area. I continued south for about 0.3 miles along the rim and then turned west and found my way back to the original trail. My hike took 5:00 hours for about 5 miles on a relatively cool 65 F mid June day. The biting gnats that swarm in June didn’t appear until the day warmed up later in the afternoon. I carried and drank 3 liters of water.

Posted by Todd Lochmoeller at 8:08 PM