The northeast corner of McLean Basin can be hiked to along the dirt road trail that turns west from County Road 10 1.1 miles north of the east turn to the Painted Hand Pueblo Trail in Canyons of the Ancients National Monument in southwest Colorado.

This is the same area where the outlying Hovenweep National Monument sites are found. It is about 1 mile of hiking to the east rim of a short side canyon close to the point where it joins McLean Basin. 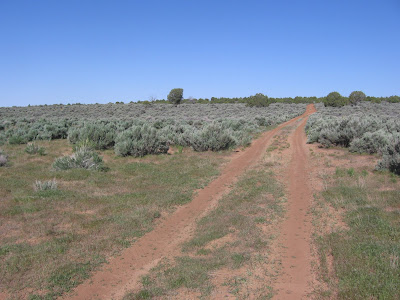 The turnoff is also about 0.4 miles south of the Canyons of the Ancients sign if traveling from the north. I drove a few hundred yards along the trail road to a point where the thick sagebrush thinned out enough to park without blocking the road. The two track dirt road heads west and then curves south. There are two side roads that I bypassed, staying on track to find the canyon rim. (In 2012, this road may be closed to vehicles but is open for hiking. If the road is closed it makes parking a problem.)

The terrain along here is mostly level with sagebrush and scattered Junipers. In mid May a lot of desert wildflowers are in bloom. I bypassed a side road that went directly to the side canyon rim and stayed southwest for about 0.5 miles until the trail came to a dead end at the rim of McLean Basin.

There are good views across McLean Basin and is a rubble pile ruins site along the north rim about 1.5 miles to the west. (Use labels McLean Basin North Rim for this site) I walked back northeast along the east rim of the side canyon toward the side road that I had bypassed and spotted a boulder based ruins site on the opposite side of the canyon. 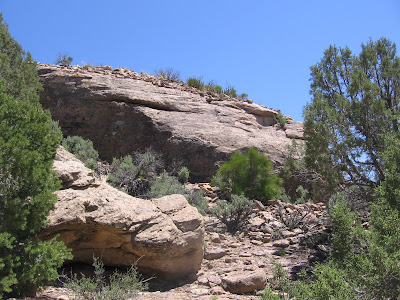 This site is high on the north and west side of side canyon but below the rim. It is a little north of the side road and I found an easy canyon crossing route about 200 yards up the canyon past the site. In mid May there was flowing water in the easy to cross creek at the canyon bottom. 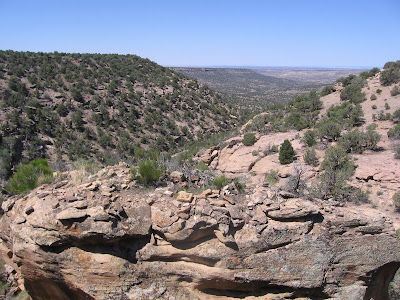 Besides the boulder top rubble and rubble around the base, there are other minor wall sections and perimeter walls at this medium sized site. There is a vague petroglyph on an alcove wall that could be a flute player, but it is very rough. From this site I walked down canyon toward McLean basin along the rim out to a point that overlooked the basin. 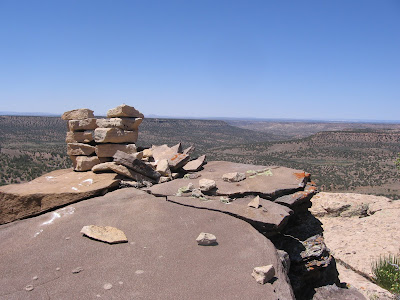 At the point there is a small pile of brick shaped stones. I didn’t have a very good angle to look over the edge for signs of ruins structures below, and I didn’t see anything else here besides this pile. I scanned to the west for the elusive McLean Basin towers, but I don’t think I had a good angle to see them.

The possible rubble pile site that I had seen was still a long way to the west. Looking back north up the next side canyon to the west on the north rim of the basin, I sighted another boulder based ruins site. 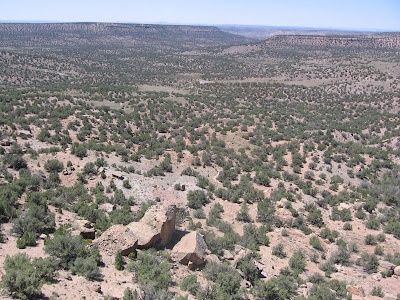 The cliffs surrounding this site were very steep and I didn’t see an easy way down. From above, it looks there was a circular tower perched on one of the boulders. The flat door cover of the tower appears to still be laying there. To the left of the main part of the site, it looked like there was an alcove with a shelf inside.

My return hike from the second site took 1:10 hours back to my starting point. The total hike took 4:10 hours for about 5 miles on a 75 F degree mid May day. Much of the time hiking in Canyons of the Ancients is spent scanning and route finding and visiting the sites. The biting gnats that are a nuisance in June in the canyon areas were starting to appear on this mid May hike.

Posted by Todd Lochmoeller at 2:28 AM