The Lowry Ruins site, 9 miles west of Pleasant View Colorado along County Road CC, is the center of the large Cow Canyon Ancestral Pueblo community. For this hike I navigated southeast about 0.5 miles through the Pinon Pine and Utah Juniper forest, looking for the west rim of the east fork of Cow Canyon. 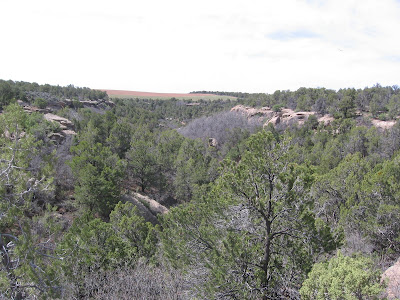 There isn’t a trail to follow and I used a compass to guide my direction. The forest is open enough to hike through, with only the fallen Pinon Pines to avoid. I arrived at a point that is about 0.5 miles south and east of Lowry Ruin. From this view point I was luckily only about 200 yards up canyon from two large ruins sites, one on each side of the canyon. They are in this view, but mostly obscured by the forest. 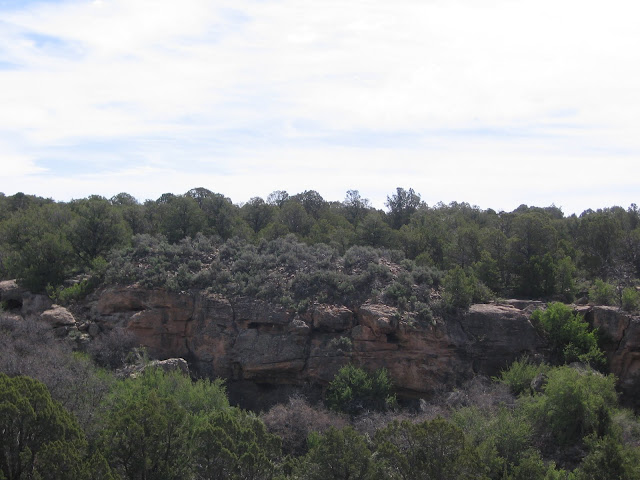 I noticed the site on the opposite side of the canyon first. It appears to be a large rubble pile that is overgrown with sage brush. Looking at it with binoculars, I could see a small wall section below the rim in an alcove and more rubble on the slope below the rim. 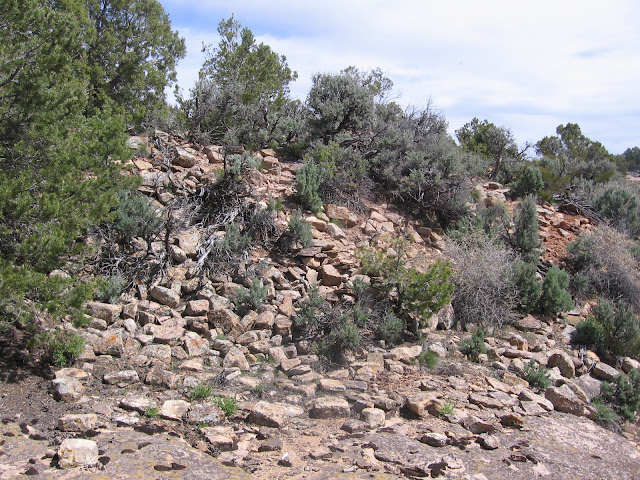 The site on the west rim appears to be much larger. There are very large and extensive rubble piles on the west rim. This site is much like the interpreted Sand Canyon Pueblo site in size and appearance. 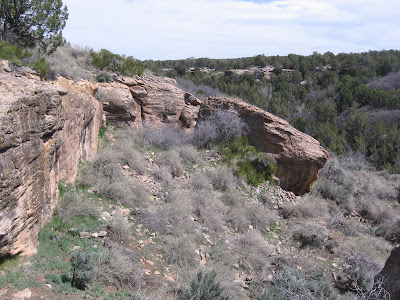 I found a notch in the cliffs to get below the rim. The site is as large below the rim as it is above. The slope is steep in spots and there is tangled vegetation in the way so the walking below isn’t very easy. There are at least two boulder top building sites, but I didn’t see any wall sections that had held together here. I didn’t try to cross the canyon to get to the site on the other side. 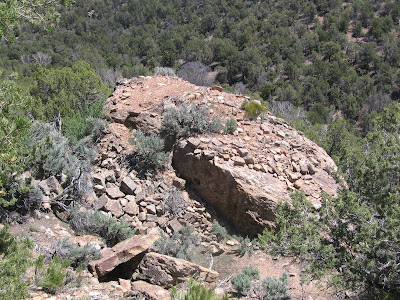 There is about 0.5 miles of west rim south of this large site to follow out to the lookout point overlooking Cow Canyon as it makes a swing toward the west. I noticed a possible collapsed tower site perched on a boulder about half way to the point and another more definite boulder top collapsed tower just before the point.

The view of the tower from the lookout point is good and it is possible to descend to get a closer view, but I didn’t go all the way down. This site appears to be isolated. I returned to Lowry Ruins on the dirt road that runs straight south from the parking area. I spent 2:40 minutes on this 2.5 mile hike on a 65 F degree early May day.

Posted by Todd Lochmoeller at 2:36 PM