The central part of Hovenweep Canyon  in Canyons of the Ancients National Monument in southwest Colorado can be accessed along the dirt road marked as Road 4525. This road travels south and east from paved County Road 10, and north of the Hackberry and Holly outlying Hovenweep sites. This road is the north part of an established mountain bike route. 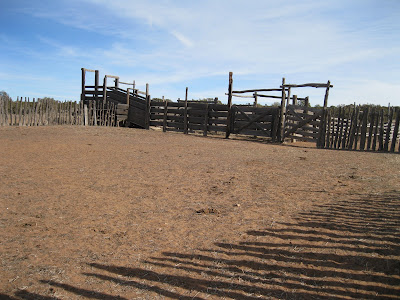 The trail road has an old corral visible from the main road and is about 1 mile north of the marked road to Hackberry Ruins and Holly Ruins, and about 6 miles north of the Hovenweep Visitor Center. The route leads through mostly Utah Juniper and sagebrush rocky terrain with small canyon drainages on both sides. The loop that mountain bike riders use connects with the road to the Hackberry and Holly Ruins Groups. 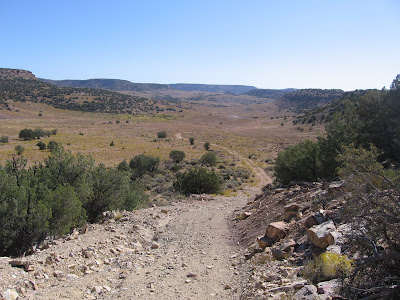 With binoculars I was scanning the canyon rims for rubble piles or other signs of the Ancestral Pueblo people who lived in the area 800 years ago. About 2.5 miles down the trail there are two minor side roads branching left and east into Hovenweep Canyon. I followed the second side route through a gate to a point where there was a good view into the basin below. The main trail continues south and makes the loop that connects back to the Hackberry and Holly road. 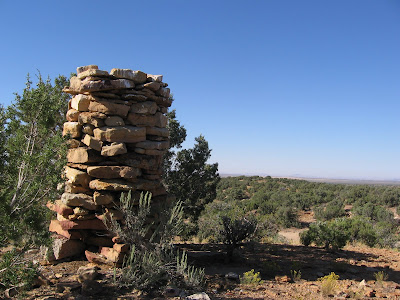 The only structure I came across was an odd stack of rocks on top of a small hill. This seemed more like an oversized cairn built recently than a 700 year old structure, but who knows. This was to the north side about one mile along the road. This hill and rock pile is visible for a long distance in this area and can be used as a navigation point. 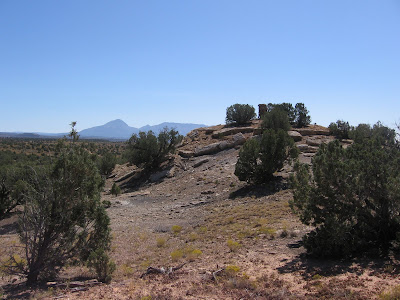 Just east and north of the odd rock pile is a small side canyon that looked promising as a possible ruins location. Most of the good sites in the area are at the heads of small canyons near a seep spring or on hilltops. I walked up this small canyon for about 0.5 miles to the head, but only saw a few scattered pottery shards. 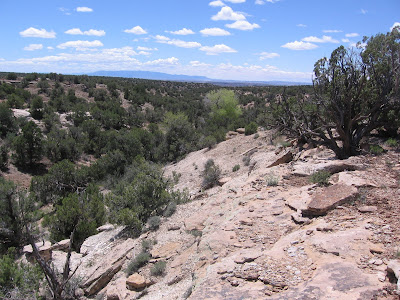 About 0.5 miles south and east of the odd rock cairn is the head of Bridge Canyon. This canyon runs north and south and is to the east of the Hackberry and Horseshoe Ruins sites of Hovenweep. I thought Bridge Canyon might be a similar location to the canyons that support the large Hovenweep sites. I hiked along the west rim of this canyon for about 0.5 miles and noticed two leafy green trees near the canyon head and some pools of water on the canyon floor. 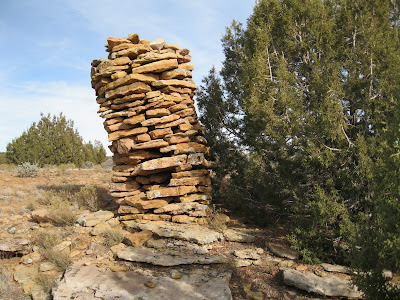 Oddly, there is another large rock cairn about 1 mile south of the old corral, but not near the road bike trail. I haven't seen cairns this big anywhere else in the Canyons of the Ancients.

To the west of Bridge Canyon, north of Hackberry Canyon, are some hilltop areas with good views and extensive sagebrush fields. Despite these favorable features I didn’t see any ruins sites in this area. I did three separate hikes in this area, each was about 3:00 hours.

Posted by Todd Lochmoeller at 10:00 AM