The Escalante Pueblo is one of the few excavated and easy to view sites in the Canyons of the Ancients National Monument in southwest Colorado. The site is located on the hilltop at the end of the 0.5 mile Interpretive Trail behind the Anasazi Heritage Center near Dolores, CO. In winter, the trail is cleared of snow and can be easily hiked. 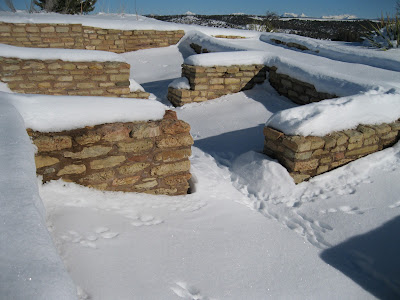 Escalante Pueblo and its nearby neighbor Dominguez Pueblo were built in the 1120s by the Ancestral Pueblo people. The location is remarkable for the views over the Dolores River with the San Juan Mountains visible in the distance. It has a rectangular layout surrounding a circular kiva. The building style resembles the Far View House at Mesa Verde and the Lowry Pueblo near Pleasant View, CO. 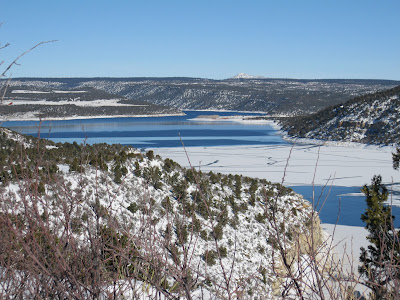 The Escalante Pueblo overlooks the area called the Big Bend of the Dolores River. The Dolores flows south from its headwaters near Lizard Head Pass and makes a sweeping turn to the northwest, flowing toward a junction with the San Miguel River and on to a junction with the Colorado River upstream of Moab, Utah. The area that is now flooded by McPhee Reservoir is rich with now submerged archaeology sites. 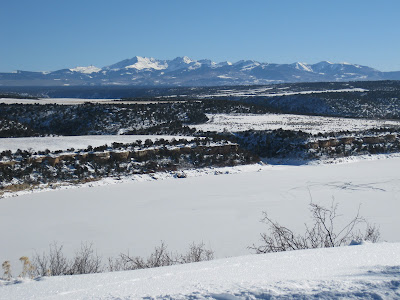 The view to the east is dominated by the LaPlata Mountains, featuring Mt. Hesperus, one of the four sacred peaks of the Navajo. The grassy mesa top areas on the north side of the McPhee Reservoir have some small ruins sites that can be visited by hiking. The Anasazi Heritage Center acts as the visitor center for the Canyons of the Ancients and has excellent and creative displays of the artifacts that were recovered prior to the construction of McPhee Reservoir.


Getting to Know Canyons of the Ancient National Monument

Posted by Todd Lochmoeller at 8:50 AM