Lowry Pueblo Ruins is located west of Pleasant View in southwest Colorado on County Road CC. It is one of the few easy to visit sites of Canyons of the Ancients National Monument. In the winter, the site is accessible but be prepared for deep snow. County Road CC is cleared of snow to the turn into the site. I parked at the beginning of the driveway and snow shoe hiked about 0.25 miles to the hilltop ruins area. 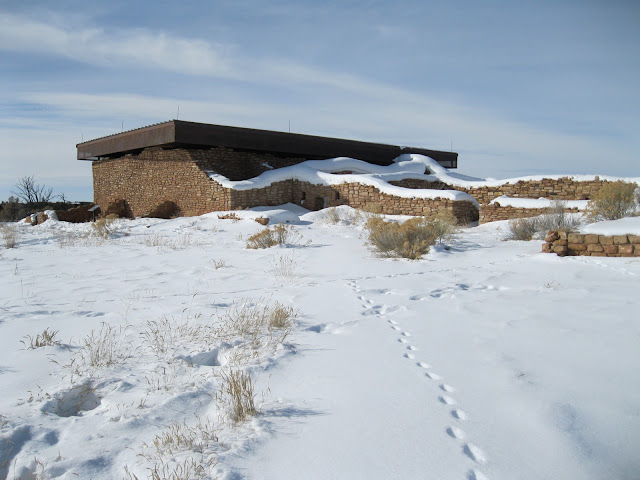 One of the several interpretive signs along the north side of the hilltop site is titled “Footprints.” It describes how the Great Sage Plain in southwest Colorado and southeast Utah was the most densely settled region of the Ancestral Pueblo world. 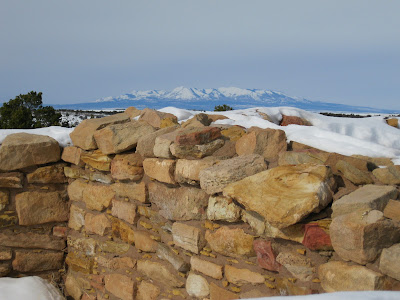 We see mostly the large ruins sites, here, and at Mesa Verde, and other publicized sites, but there are many subtle sites hidden in the canyons and mesa tops in the Canyons of the Ancients area. The Hopi consider these sites to be footsteps of the ancestors. The Lowry site has views of all of the regional mountain ranges. 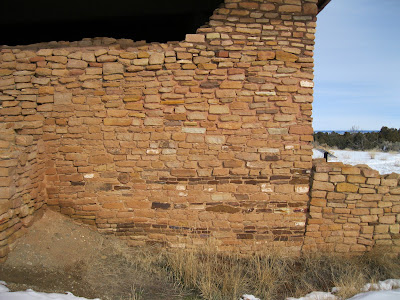 Lowry Pueblo is generally rectangular with doorways on the east side facing a plaza area that extends down to the Great Kiva. I noticed on the south side several lines of stones that seem to be glazed, or at least have a different color that were placed together. This southeast corner seems to clearly show a wall section that abuts the larger wall, rather than being tied into it. 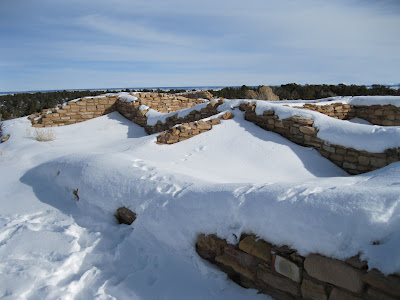 The west wall doesn’t show any ground level doorways. On this side there is a line of small rooms that were entered from roof top entryways. The winds and weather systems in this region are mostly westerly; perhaps this arrangement offers protection from weather. The snow appears to really pile up on this side also. 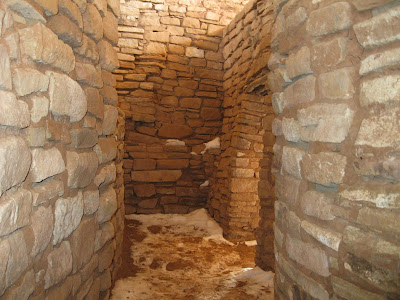 It is possible to enter Lowry Pueblo on the east side to view the interior kiva. This kiva is famous for the painted designs that were on the interior walls. These paintings aren’t visible anymore, but there are pictures and a preserved section at the Anasazi Heritage Center near Dolores, Colorado. On the interior there are close up views of the interior stone work and passageways.

I spent about 1:30 hours on this visit on a 15 F degree sunny winter day. The mid January snow was about two feet and walking moderately difficult in most places. The entry road snow was somewhat compacted by a vehicle and was relatively easy walking.

Posted by Todd Lochmoeller at 5:37 AM