Cannonball Mesa Point overlooks the Ismay Pueblo and Petroglyph site along the southwest side of the Canyons of the Ancients area in southwest Colorado. This area is about 26 miles west of Cortez, CO along County Road G, then about 0.2 miles north on the rough Yellowjacket Canyon road. 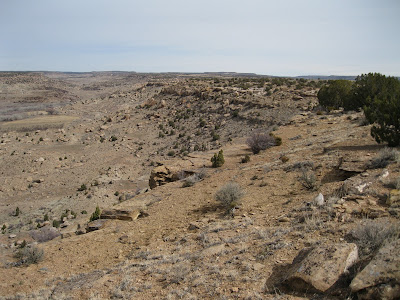 I started my hike 1.4 miles northeast along the rough Yellowjacket Canyon road and followed a cow trail to the top of the mesa. The cow trail isn’t marked but is reasonably obvious and the climbing is easy. It took me 20 minutes to get to the rim where I turned right, back southwest toward the point. At the top, I startled a group of cows that were lounging there. I followed the rim along the cliffs overlooking the mouth of Yellowjacket Canyon. 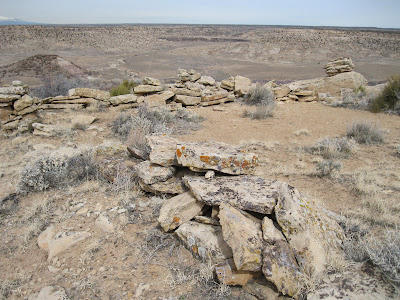 Near the point there is a new looking protective barbed wire fence and a short distance beyond there is an ancient zig zag rock wall that encloses the point, about 300 yards from the tip. It took me 0:45 minutes of hiking to arrive at the rock wall. 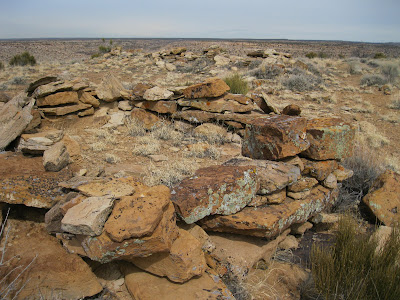 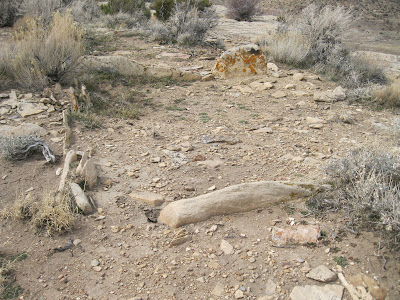 Between the rock wall and the point, particularly on the north side, there are several rectangular outlines made of flat slab rocks turned vertically. Mesa Verde National Park has some excavated and interpreted sites similar to these on the Mesa Top self guiding tour and also on the Badger House Trail. The information there says that the transition from pit houses to pueblo villages featured shallow slab lined pits supporting a frame and lattice of wooden poles that were plastered over with mud. 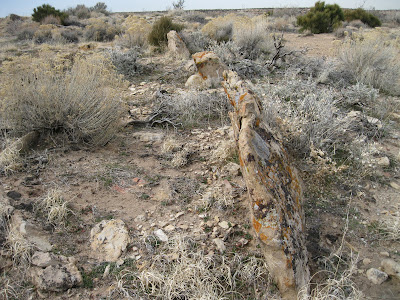 In later eras, the wooden structures were replaced with stone masonry. The Mesa Verde Interpretation suggests that there may have been a shortage of wood, or that disastrous fires prompted the change. The date of this style is given as 850 AD. I also noticed a large circular depression that was outlined with similar rocks. 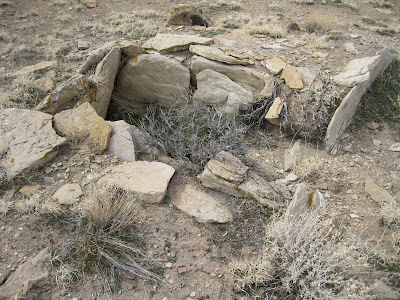 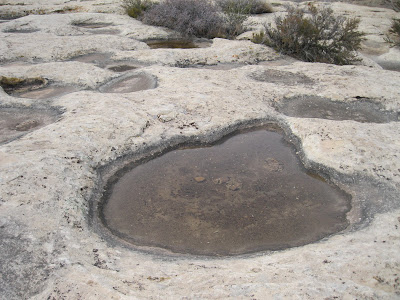 The rocky tip of the point has quite a few potholes in the sandstone that catch and hold quite a bit of water. There is water available for this site in the canyon bottoms below from the flowing creeks, but none near the mesa top point other than these natural storage tanks.

The mesa top area is dry rocky terrain with a few Juniper trees and desert shrubs and grasses. From this water storage area, there are also views overlooking the pueblo site that is near the Ismay Trading Post. 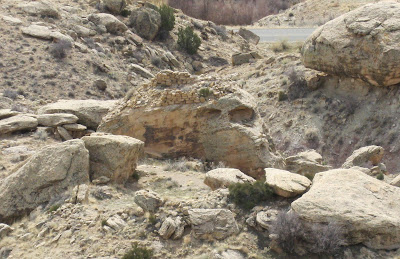 Looking south near the south end of the zig zag wall, there is a boulder perched structure between the cliffs and County Road G. I only viewed this structure from the rim. I lingered on the point for 1:15 hours and the return hike took 0:50 minutes for a total hike of 2:50 hours for about 3 miles. I carried and drank 2 liters of water on a 52 F degree early March day.

Posted by Todd Lochmoeller at 9:17 AM