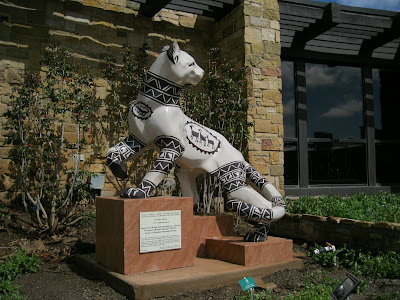 The Chuska Puma greets visitors to the Anasazi Heritage Center. The Chuska Puma is part of the Pumas on Parade effort to raise awareness of mountain lions. This puma has some examples of rock art as part of its design. There are 17 or so artistic pumas on display, mostly in southwest Colorado.
The Chuska Puma was donated by the Kinder Morgan Company, who also provides road maintenance in the remote parts of the Canyons of the Ancients. My own experience is that the gas well workers have been helpful to hikers trying to find their way around the backcountry areas. The puma has been recently moved from inside the Center to this attractive outdoor position 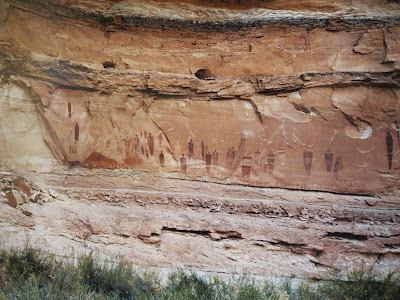 The most ancient art is called the Barrier Canyon Style. The artists are currently called the Western Archaic Native Americans, but we are not sure who they were or even who their descendants are. They lived as hunters and gathers and left their paintings in sheltered canyons along their migration routes. The most famous place to find examples is in the Grand Gallery of Canyonlands National Park. They have many very large ghostly and spirit figures. 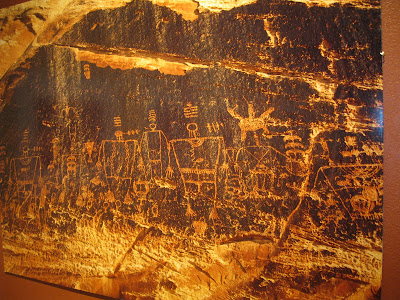 The group that we used to call the Anasazi, and now call the Ancestral Pueblos were the first group to practice agriculture in Utah. The Ancestral Pueblos rock art is divided into the Basketmaker and Pueblo phases. The rock art resembles the Barrier Canyon and Fremont style but the images include arms and hands and more details.

There are some relatively easy panels to find along the San Juan River near Bluff, Utah, particularly the Sand Island boat launch site. The small panels that are visible at Mesa Verde are some Colorado examples. The Pueblo phase people produced less rock art, but more decorated pottery, weaving, and kiva painting. 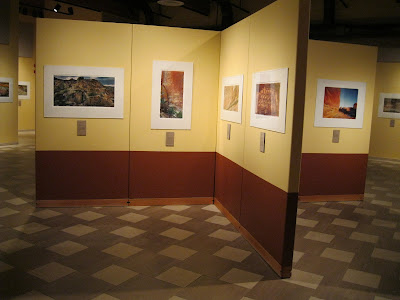 The Ute Style is the most recent, dated from 1600 to 1930. The Ute Style features horses, bison, and shield-shaped stick figures. The Ute Mountain Tribal Park near Cortez, CO has some Ute local examples, and horse figures are found in a few places in the Canyons of the Ancients.

In the gallery room, the pictures are arranged around the outer wall, with a center section. Each picture has a short description, and there are interpretive posters giving general information on each style. I was hoping for maps that would show where the sites are located, but no luck. 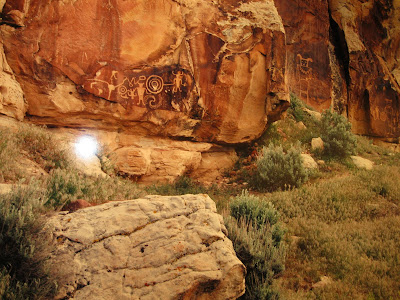 The group that we call the Fremonts lived in the northern three quarters of Utah from 400 to 1300 AD. We don’t know who their ancestors or their descendants are. There are several styles of Fremont work, with many animals, hunting scenes and horned human figures.

There is a book of these same pictures on sale in the gift shop. I would like these books to include maps or directions that show how to visit these sites yourself, but they usually don’t.

Posted by Todd Lochmoeller at 5:53 AM