The Holly Ruins Group is one of the outlying sites of Hovenweep National Monument in southwest Colorado. The rough road leading to the Holly and Horseshoe Units is about 5 miles north of the Hovenweep Visitor Center along County Road 10. 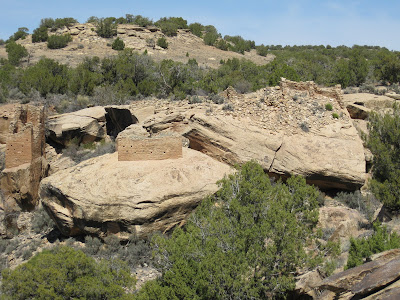 I started my hike close to the Holly Ruins Unit and continued south and east along the BLM road into the Canyons of the Ancients. This is part of a loop route in this area that mountain bikers follow. The Holly Group features several structures that are perched on large boulders including Tilted Tower where the boulder has shifted, dumping most of the structure into Keeley Canyon. 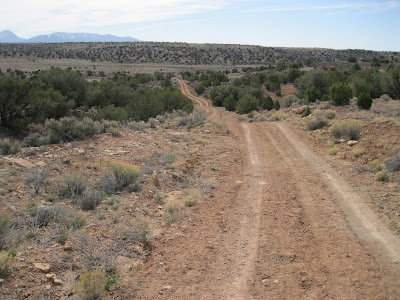 After about 10 minutes of hiking there is a marked junction with BLM Road 4723 turning south and Road 4721 continuing southeast. I stayed to the left on 4721 which crosses the canyon bottom of Bridge Canyon. Toward the east side there are two side canyons as the road begins to climb to the mesa top area between Bridge Canyon and Hovenweep Canyon. The first side canyon has two small stock ponds near the road. 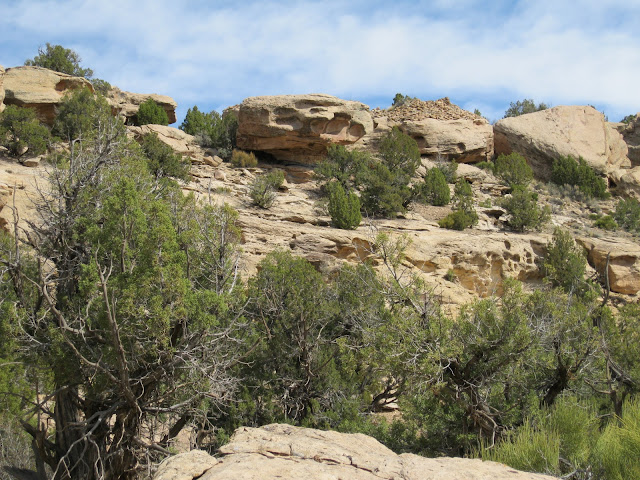 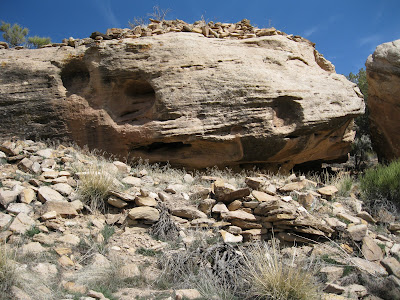 There are collapsed structures in front of the boulder based rubble piles. I was 0:45 minutes into my hike when I spotted this site and it took a total of 1:00 hour to arrive. I had to look around for several minutes to find a way to climb up and only found one gap in the cliffs below the east side. 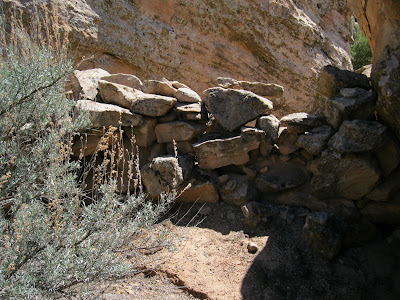 On the back side of the large boulders, there was an interesting wall section that blocked access to the site from the east. The routes up were so limited and difficult that I wondered if this was more of a safety fence than a barrier to entry. 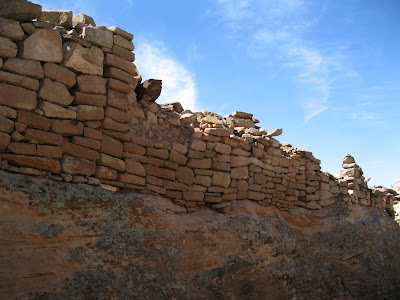 The best wall sections still holding together were on the back side along the boulder top. There is just a narrow passage way along the back side between the structures and other large boulders. The style of brickwork makes an obvious change from the left to right sides. The visible pottery shards that I saw here were a mix of corrugated and painted black on white. 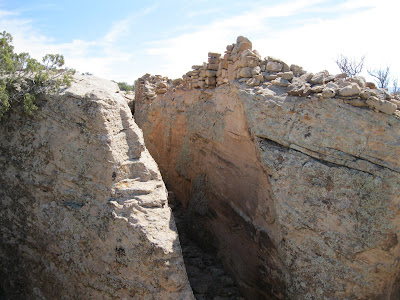 It was easier to descend down the west side of the ridge to the drainage and loop back to the stock ponds, than to return the way I came. From the ruins site, it only took 0:10 minutes to return to the ponds. From the ponds I retraced a short distance east and arrived at the mesa top area on the east side of Bridge Canyon. I turned around at the marked junction with BLM Road 4722 that heads north.


Road 4722 is part of the bike route and eventually loops west to a junction with County Road 10 about 1 mile north of the Holly turnoff and there is an old corral visible near the intersection. My return hike took 0:50 minutes and my total hike took 2:40 hours. I also made a short visit to the Holly Ruins Group. It was 56 F degrees at my 10:20 AM start and 68 F degrees at my 1:00 PM finish on a warmer than average early April day. I carried and drank 2 liters of water.

Posted by Todd Lochmoeller at 5:43 AM