The Woods Canyon area of Canyons of the Ancients is west of the community of Yellow Jacket in southwest Colorado. From Highway 491, turn west on Road Y and south on Road 15.

About 0.2 miles south of the junction of Roads U and 14, a well maintained gravel road turns west and leads south for 6 miles along the east rim of Woods Canyon, eventually reaching an overlook point of the junction of Sandstone Canyon and Yellowjacket Canyon. 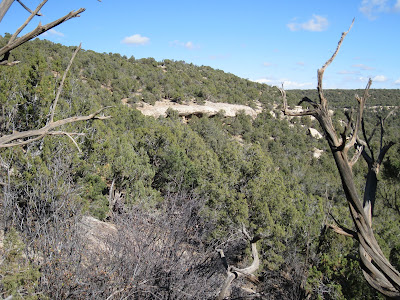 About 1.6 miles along this road, there is an unmaintained side road that runs parallel to the main road on the east side for about 1 mile. I started my hike at the north end of this side road and walked this segment without noticing any Ancestral Pueblo ruins sites.

There are several points where the road is close to the rim and allows some good views to the east. From the south end of the segment I turned east to find the canyon rim again. From this angle there are some alcoves visible in the second level of cliffs. 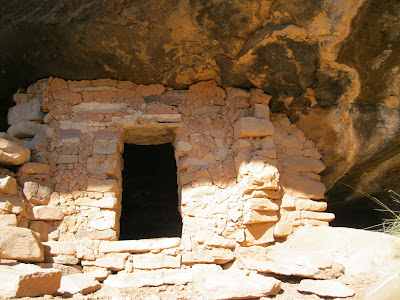 The alcoves are approachable, without a trail, from the south side. There aren’t very many alcove ruins sites in the Canyons of the Ancients. This is one of the bigger alcove sites that I have seen here. 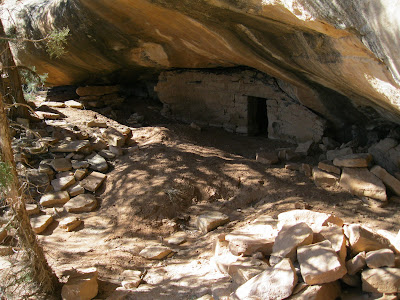 There are a series of these small structures in the alcoves at the base of these cliffs. Rubble flows away from the alcoves down the slope. 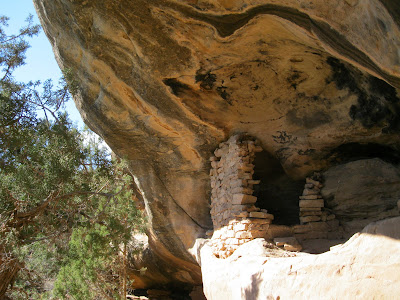 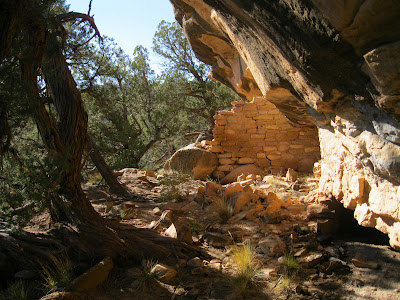 These rooms all seem to be small. I didn’t notice any pottery shards or rock art around this site. 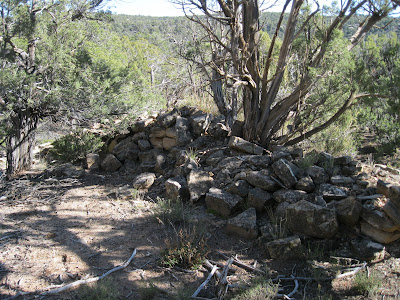 The amount of stones used for this rubble pile site is probably greater than the entire alcove collection put together. Alcove sites are popular to visit as they are usually better preserved, but the rubble pile sites usually seem to be much larger and are more numerous in the Canyons of the Ancients. 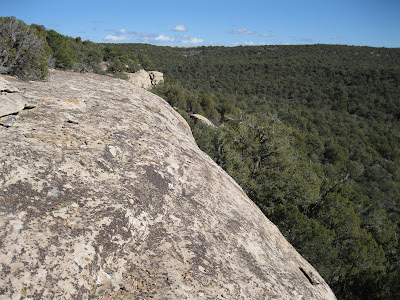 I found a small gap in the cliffs to climb back to the rim, but this spot isn’t obvious and would be a tricky descent. The cliffs extend for a distance to the north, so the south side approach appears to be the easiest. From above, the rubble pile ruins site is visible. I didn’t see any rim top structures above the alcoves.

My total hike took about 2:00 hours for 2 miles on a 48 F degree mid November day. There is a mesa top ruins site along another side road about 1 mile south of this site. Both of these sites are close to the large Wood Canyon Pueblo site.

Posted by Todd Lochmoeller at 5:43 AM