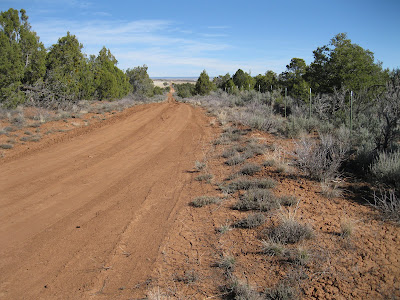 The access I used started at the junction of County Road P and County Road 18, west of Highway 491, and continued south on Road 18 until it made a west turn and there is a green gate visible. The last mile of County Road 18 is a rough dirt road. This access is shown on the current Canyons of the Ancients maps available at the Anasazi Heritage Center Near Dolores, CO. Older maps will show this area as still private property. There is an old road inside the green gate that leads east for a short distance, and then a rougher trail leads southeast and arrives at the west rim of Trail Canyon after about 10 minutes of hiking. I looked around this canyon rim for about 0:40 minutes without noticing any Ancestral Pueblo ruins sites, and then returned to the starting point. 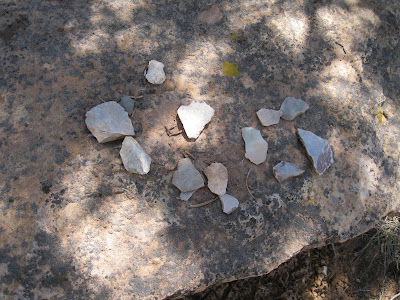 The advantage of returning to the starting point is that you can hike south around the heads of two side canyons without having to descend and climb out again. I walked parallel to a fence that runs north and south. After 0:10 minutes of hiking I noticed a small array of sharp edged rocks that seemed to be in a completely random location. I didn't see anything that resembled a ruins site in the vicinity. It was as if someone had decided to abandon their collection on a convenient ledge. 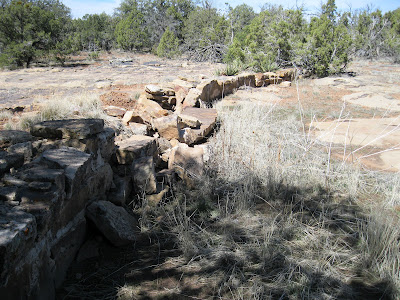 About 0:15 minutes further on there is a low block dam on a wide sandstone outcrop. This looked like the work of ranchers, but they could have been making improvements on a more ancient work. I think there is a small lake near the Goodman Point Pueblo where ranchers made upgrades to much older structures. Mummy Lake at Far View on Mesa Verde is an example of Ancestral Pueblo water supply engineering. 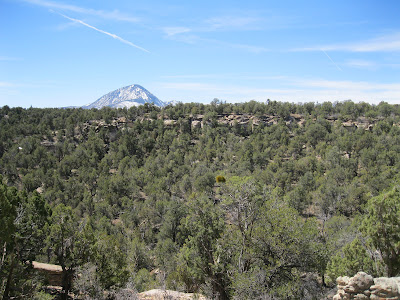 I stopped at the north rim of Morrison Canyon where there are steep cliffs in the vicinity of the fence. The Canyons of the Ancients continues across the canyon and there may be access to the east rim of Goodman Canyon on the other side. Sleeping Ute Mountain is poking its head up beyond the mesa top.

The online article describing the Morrison Canyon area mentions that there are ten important archaeological sites including pit houses, a pueblo, a granary, and a field house. The area also provides wildlife habitat and is an important part of the McElmo watershed. 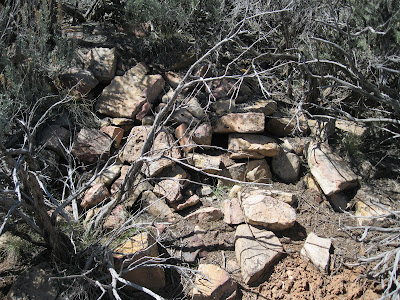 On the return hike I noticed a rubble pile site along the fence line about 0:15 minutes of hiking directly west of my starting point. This rubble pile was very overgrown with sage brush and had some ranching artifacts mixed in with the rubble. My total hike in the MorrisonCanyon area took 3:50 hours for 3 or 4 miles on a 68 F degree late March day. I carried and drank 2 liters of water. This appeared to be an area that gets very few visitors.
Posted by Todd Lochmoeller at 4:27 PM