The Mockingbird Mesa area in the Canyons of the Ancients is 8.5 miles south on County  Road 12 from the junction with County Road BB, west of Pleasant View in southwest Colorado. The route zig zags and the road numbers change before arriving at the normally closed gate near a carbon dioxide gas plant. 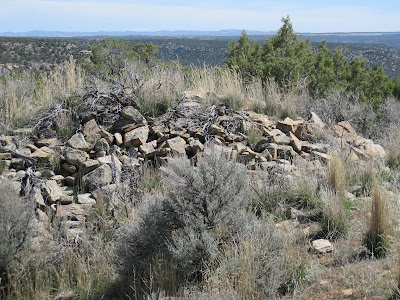 From the closed gate there is a way between the buildings to the east rim of Mockingbird Mesa. Turning north behind the plant there is a large rubble pile mesa top Ancestral Pueblo ruins site overgrown by sagebrush and the Pinon and Juniper forest. This is the easiest unpublicized ruins site to find in the Mockingbird area. 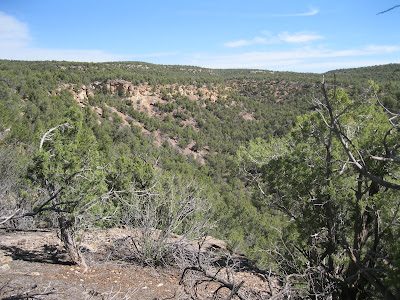 On this hike I continued north along the mesa top rim. A short distance north, there is a gap in the cliffs that allows an easy descent to the lower levels of cliffs. There is also the option to climb back to the highest cliff level. I chose to continue on a middle level, but not all the way to the canyon bottom. This canyon appears to be a side canyon of Sandstone Canyon. The hike I called Mockingbird Mesa Below the Rim finds some ruins sites in this same vicinity. 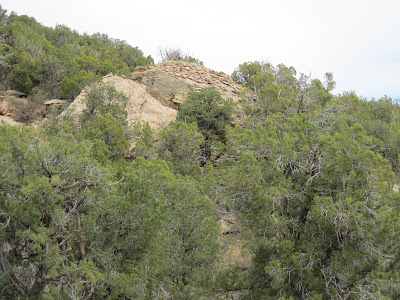 After about 1:10 hours of slow hiking, about 1.5 miles, there is a large boulder visible with rubble on top. I didn't see this until I was about 100 yards from it. It is visible from a much further distance from the higher levels of cliffs, but would be harder to approach from above. 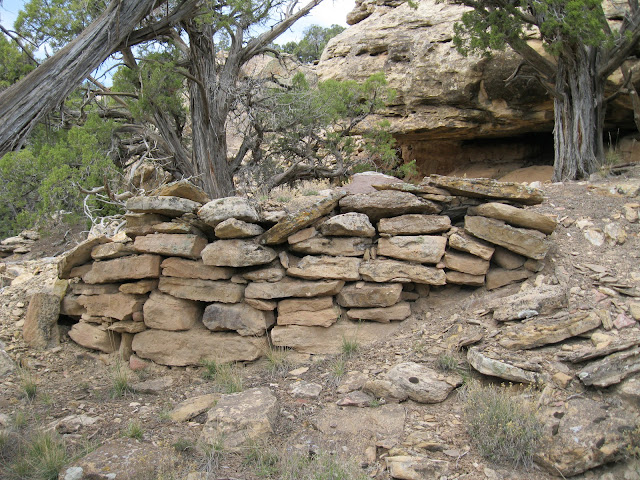 In front of the large boulder, there seems to be a semi-circular retaining wall, forming what looks like a small plaza. 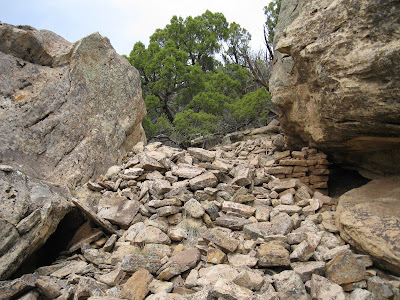 Most of the structure that was on the boulder top has fallen into the gap between the main boulder and an adjacent boulder. A small wall section encloses a minor alcove. This site looks like an isolated tower with a few features below, but not a village. From the boulder top area, it appears that there is a good line of sight with the large rubble pile site that is behind the carbon dioxide plant near the starting point. 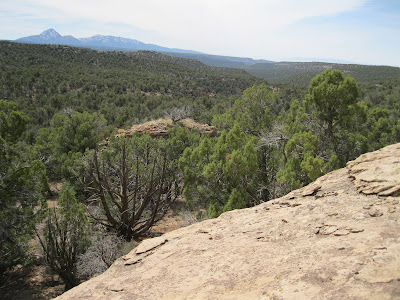 There are some large boulders above the ruins site to climb for a view of the top of the ruins boulder. There are also two levels of cliffs above the site that can be climbed for better views of the canyon area. 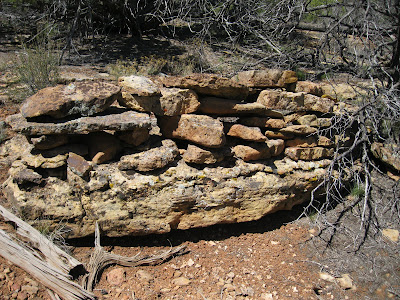 I continued further north slowly for about 0:30 minutes and noticed a couple of places where there were stones piled to form a low wall. These walls didn’t seem to be associated with any other structures so it is puzzling what they are.

My return hike was along the highest level of cliffs. From here I could see the site I had just visited from a distance, but didn’t see any other sites in this area. My total hike took 3:50 hours for about 4 miles. I carried and drank 2 liters of water on a 65 F early April day.

Posted by Todd Lochmoeller at 5:16 PM