Lowry Pueblo Ruin is nine miles west of Pleasant View, in southwest Colorado on County Road CC and is toward the north end of the relatively new Canyon of the Ancients National Monument. The interpretive material on site draws attention to how this site compares to similar sites in the region.

The kiva enclosed by rectangular walls is a style that is also seen at Far View at Mesa Verde and the Escalante Pueblo at the Anasazi Heritage Center in Dolores. 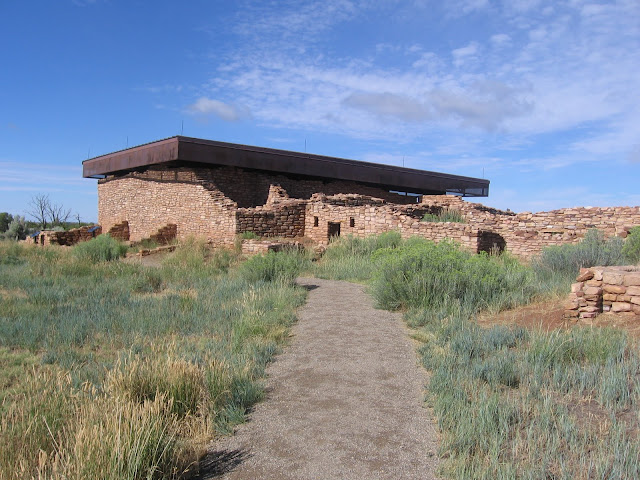 The Lowry Ruin was excavated in the 1930s and is situated on the Sage Plain area, an area suitable for dry land farming and surrounded by deep canyons with Pinon Pine and Juniper forest. It is thought that the ruin was constructed beginning around 1060 and was occupied for about 165 years. 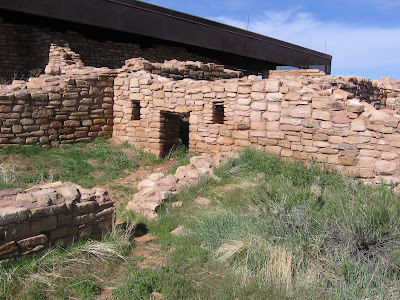 The interpretive material describes how the site was built up during different construction periods. The different masonry styles used in different stages can be noted. Some of the features are thought to show influences of the Chaco Canyon style. The site is rectangular with the back wall facing the west and a separate Great Kiva across a plaza area to the east. 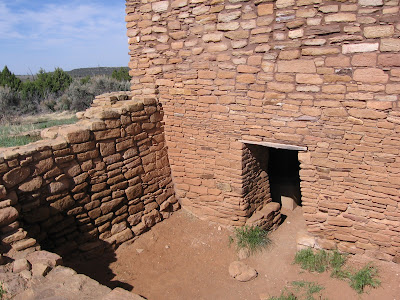 The protective structure covers a kiva that was famous for the designs painted inside, though these have faded now. It is possible to enter the kiva through the low door and view the kiva from the bottom up. 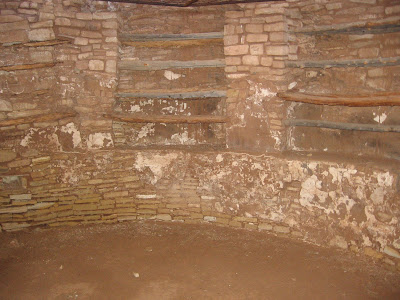 The interior of the kiva shows some apparent racks made of wood. Similar features are seen in one of the kivas at the Coyote Village site in Mesa Verde. Kivas are usually interpreted as having ceremonial functions but I try to see them also as a way to deal with weather extremes, refuges from harsh temperature conditions. 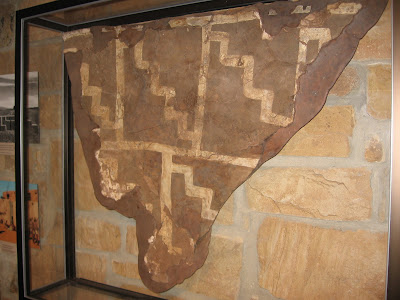 The Anasazi Heritage Center in Dolores, CO has a preserved section of the Kiva designs and some large photos of what they originally looked like. There are also more details and pictures of the site. There were two styles of the designs that circled the kivas and these same designs are seen on pottery and petroglyphs around the region. 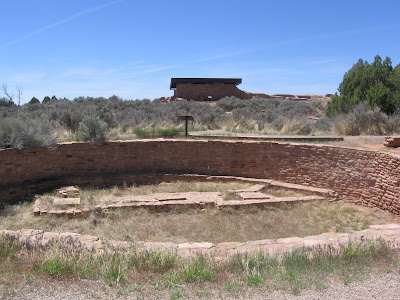 The Lowry Ruins site has a Great Kiva, one much larger than average. This one has unusual stone work features that are thought to be symbolic of the Winter People and Summer People. 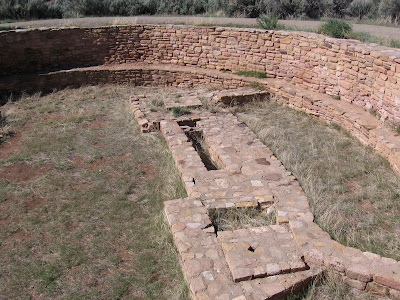 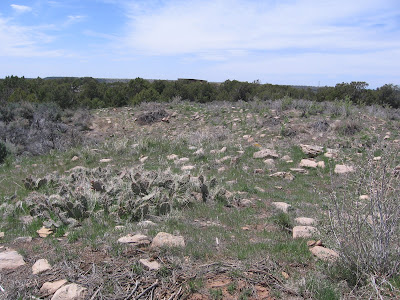 There are other unpublicized ruins sites to look for in the Lowry Pueblo area. The Lowry Pueblo sits on a hilltop between two forks of Cow Canyon. The rims of the two forks are good places to look. There is also an unnoticed fairly large site along the entrance road to the Lowry site. (Use the Cow Canyon labels for more on these hikes.) 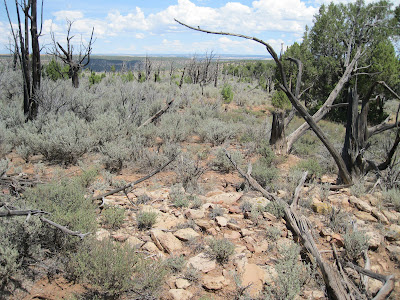 County Road CC continues west past the Lowry site for a short distance. I tried a short hike to the west from where the road makes a turn to the south. After about 0:15 minutes of climbing uphill through Pinon and Juniper forest I came to a sagebrush field that looked like it had burned near the east rim of Cross Canyon. There I found an elongated rubble pile site with many pottery shards and a line of turned on end flat stones, but nothing else in the vicinity.

Posted by Todd Lochmoeller at 5:44 AM