The Upper Trailhead for the Hovenweep Cutthroat Castle Trail can be used as a starting point for a hike to the west rim of Negro Canyon. This area is about 10 miles north of the Hovenweep Visitor Center along County Road 10 near the southwest Colorado and Utah border.

An old road that is labeled on the Canyons of the Ancients map as 4531f descends into Hovenweep Canyon and heads north. 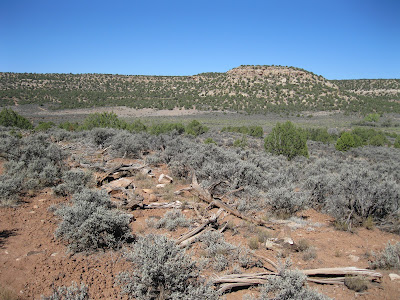 As the road passes below the Painted Hand Pueblo ruins site, there is a side trail that climbs to the mesa top area between Hovenweep and Negro Canyons. It took me about 1:00 hour to arrive at the mesa top. 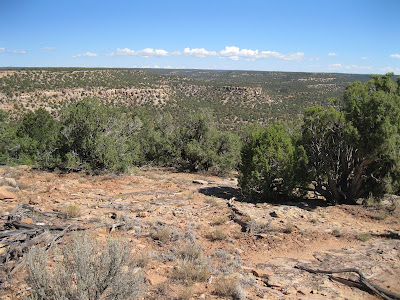 Along the canyon floor of the west side of Negro Canyon, there are at least three rubble pile ruins sites and there is also part of a circular tower on a ledge of the cliffs. (Use the Negro Canyon labels for views of these sites.)  On this hike I turned south and walked along the west rim of Negro Canyon. From this area, some of the power lines and gas plants on Mockingbird Mesa to the east can be sighted. 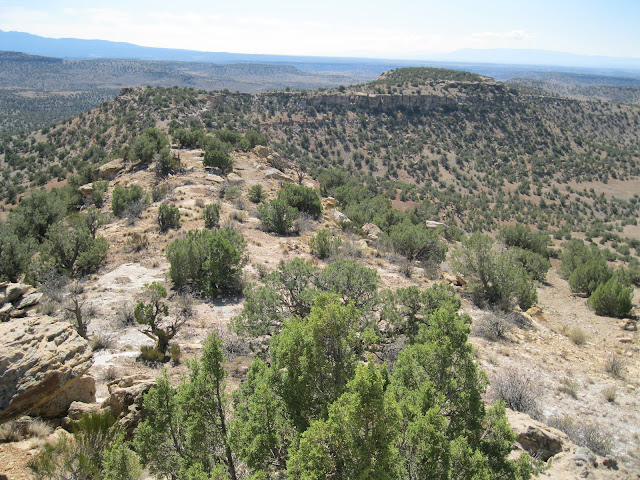 About 1 mile to the south there is a dog leg knife edge area leading to a sky island formation. These rocky points with good views are sometimes likely locations for ruins sites. 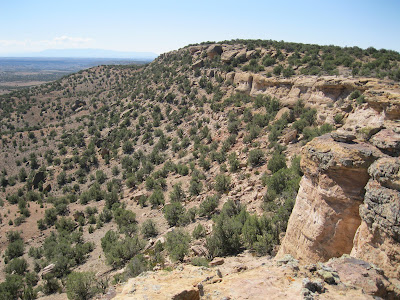 At the elbow of the dogleg, it looked like there was a boulder based ruins site in the area below the rim. I didn't notice any ruins sites in this area up to this point. I didn't walk out to the tip of the sky island. To get to the boulder below I had to backtrack to a low point along the knife edge to avoid the steep cliffs. 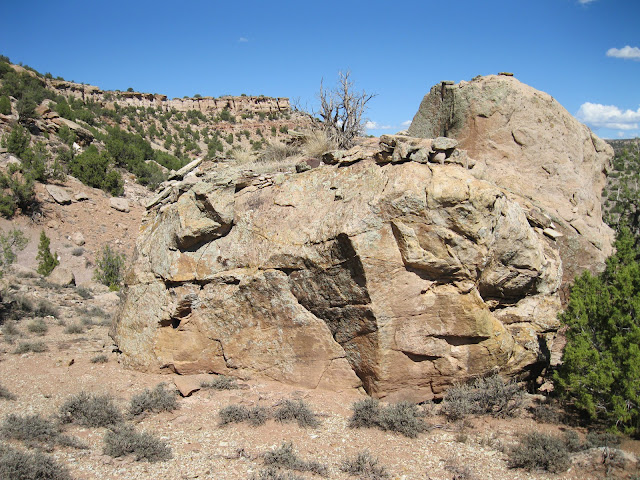 It took me about 0:30 minutes to arrive at the boulder from the rocky point above. There was a small amount of rubble visible on two levels of this pair of boulders. I was 2:50 hours into my hike when I arrived at this site. 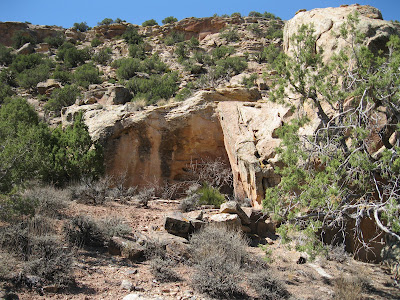 On the east side, there was a short low wall of large boulders that form a small plaza. The creek bottom of Negro Canyon near this site has several Cottonwood trees growing, suggesting that there is some local water in this otherwise dry area. 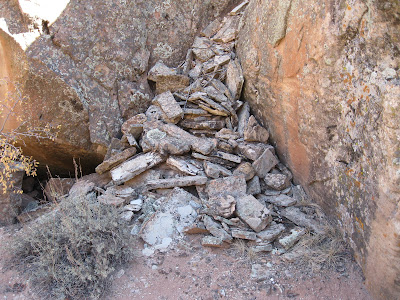 It appeared that much of the rubble has fallen on the north side between the two boulders. These building stones appear to be more thin and flat than most of the ruins sites in the Canyons of the Ancients. 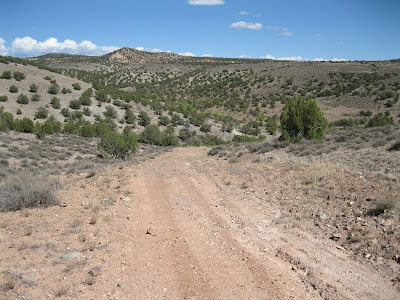 From this ruins site is a 5 minute walk east to the road that appears on the Canyons of the Ancients map as 4532. This road connects to the bicycle loop that passes by the Hackberry and Holly sites, so it is possible to bike to this site but not drive. It is difficult to pick this site out from the road. I followed road 4532 back north and then turned west and climbed back to the Negro Canyon mesa top and then returned the way I came on Road 4531f.

My return hike took 2:50 hours for a total hike of 6:00 hours for about 9 miles. I hiked on a 76 F degree late September day and carried 3 liters of water.

Posted by Todd Lochmoeller at 5:22 PM