The Little Ruin Canyon Trail is a 2 mile loop mostly along the rim of a small canyon that visits at least 10 centuries old Ancestral Pueblo Ruins sites that show a variety of building shapes. The trailhead is located at the Headquarters of Hovenweep National Monument along the remote southern Utah-Colorado border. 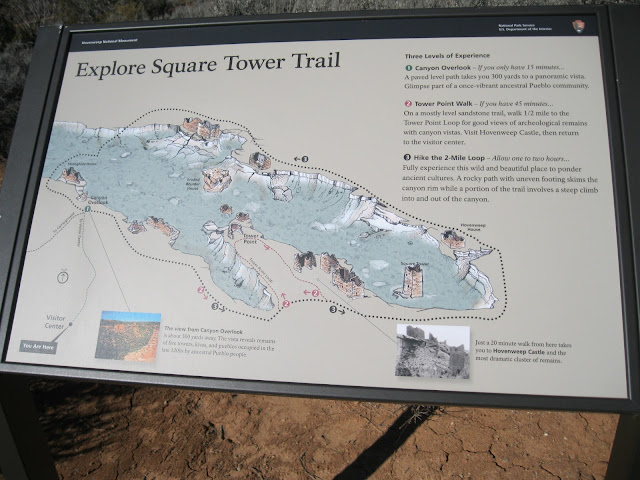 The sign near the Headquarters also calls this the Square Tower Trail. Among the interesting details of the Little Ruin Canyon group is the placement of the doors and windows. 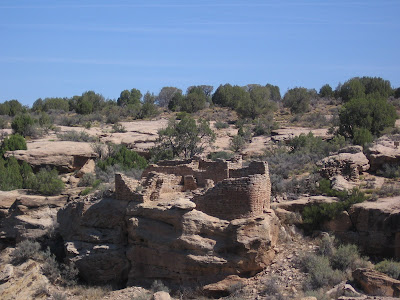 Besides the Little Ruins Trail there are four outlying sites with trails in the vicinity of the Hovenweep headquarters and numerous other un-publicized sites that are part of the surrounding Canyons of the Ancients National Monument.

Following the trail counter clockwise, the Stronghold House is named for its fortress like structure. The stone blocks are thought to be very well shaped. Stronghold House has more details visible when viewed from across the canyon. 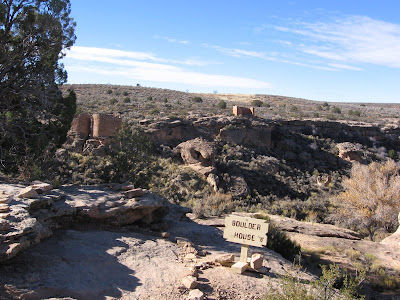 The Eroded Boulder House uses both the inside of a boulder below the rim and also has some remains on top. Binoculars are handy for viewing the Eroded Boulder. If you visit more of the sites in the area, you will see other examples of structures perched on boulders. The Holly Ruins Group, about 4 miles north has several structures perched on boulders. 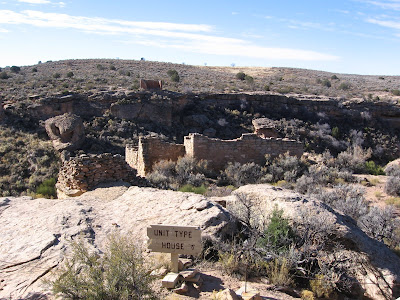 The Unit Type House is an example of a basic unit of living rooms, storage rooms and a circular Kiva. The larger pueblos repeat this unit into a larger collection of structures. 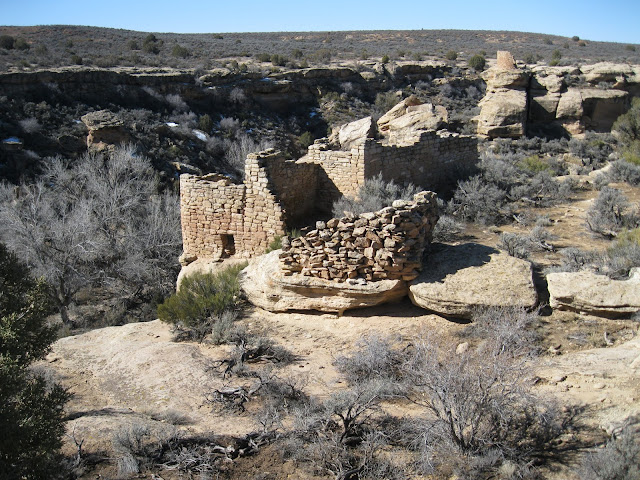 The porthole openings on the east side of Unit Type House may have been used as a Skywatcher observation point. This is also an example of a doorway that is placed in a difficult location, over a drop-off. 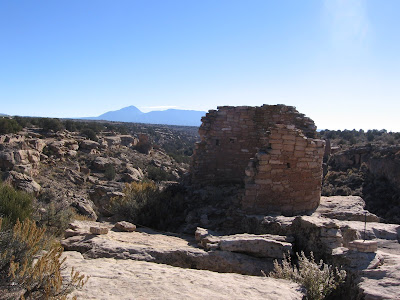 There are two heads to the Little Ruin Canyon. Between the heads a trail leads out to Tower Point where a tower sits with a commanding view of the canyon and Sleeping Ute Mountain to the east. The alcove areas below Tower Point were used for storage of corn, beans, and squash. There the remnants of an unnamed tower visible just below Tower Point. 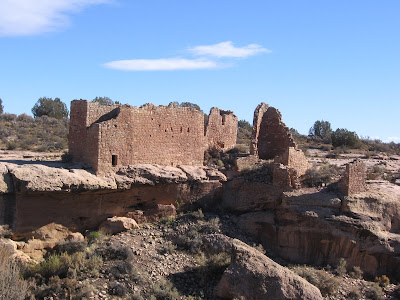 Hovenweep Castle has two D-shaped towers and appears to be the largest in the area.  There is a lot of speculation as to why towers were built. Some of the possibilities are celestial observation, ceremonial, defense, storage and communication with the other towers. There is a lot of rubble below the Hovenweep Castle indicating that there was a lot more here than we see now. 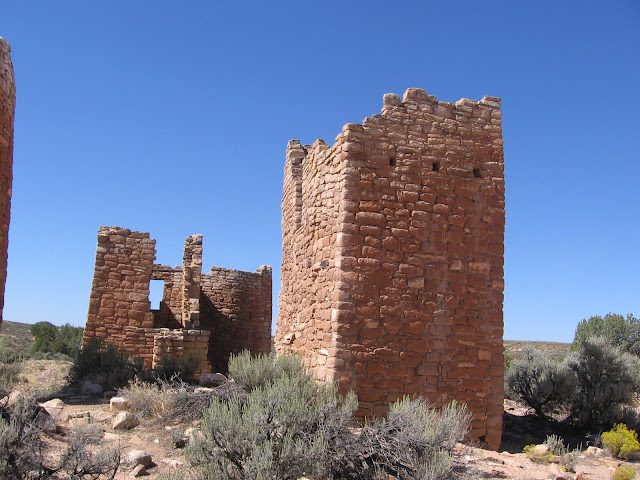 Hovenweep Castle has an upper story T-shaped doorway that is visible from both the east and west sides. 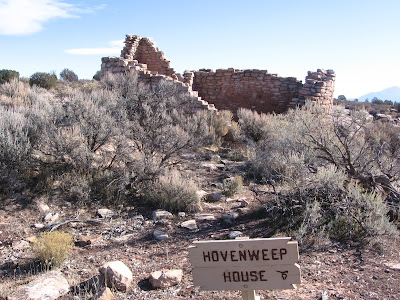 Hovenweep House was the center of one of the largest villages in this group. There is a lot of rubble in this area. This structure has survived due to a good foundation while the other structures have crumbled. 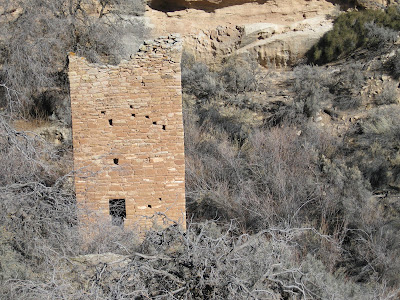 The Hovenweep Castle and Hovenweep House overlook the Square Tower down in the relatively lush canyon bottom. The Square Tower has a slight twist as it rises above the creek bottom. From the south rim, a T-shaped doorway is visible. The spring that supported the community is down in the canyon in this area. 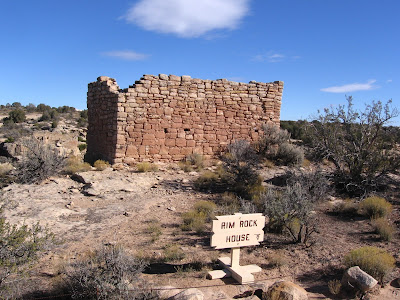 Rim Rock House is not thought to be a residence structure. The trail guide has a discussion of why are there so many peepholes in these structures. A practical use might be ventilation and light, but these aren’t seen at other sites around the region. Below Rim Rock House the Round Tower is visible. 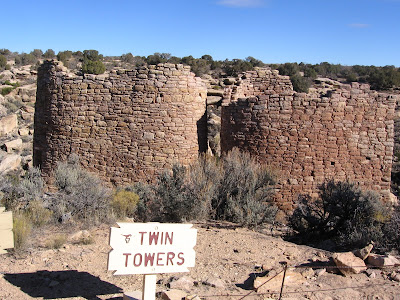 The Twin Towers had 16 rooms with one tower oval and the other horseshoe shaped. These are thought to be two of the most carefully constructed structures in the Southwest. 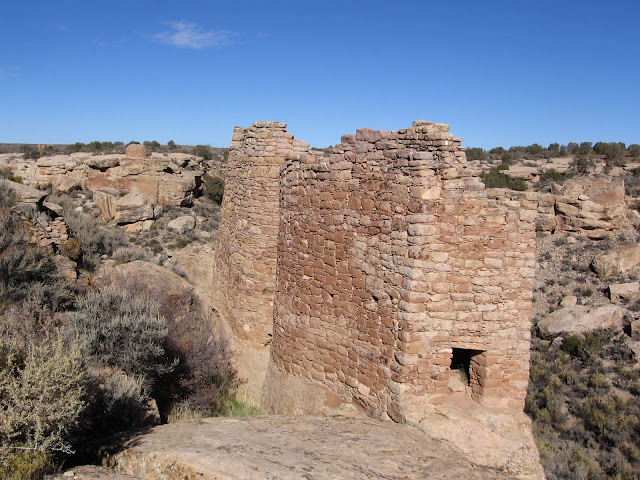 In the distance to the left is another view of Tower Point. The east tower has another example of a doorway in a precarious location. 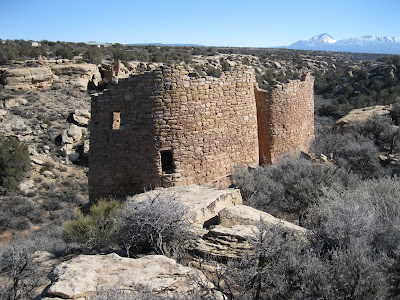 The west tower has both a lower and upper story doorway. At the open end of the canyon the trail dips steeply down to the floor and then returns to the rim. It takes 1:00 hour or more to walk this rich trail.


Posted by Todd Lochmoeller at 8:53 AM