At the lower trail head for the 6.5 mile Sand Canyon Trail in Canyons of the Ancients NM in southwest Colorado, there are connectiong trails for East Rock Creek Trail  at 0.25 miles and about 2.0 miles. There is a 5.0 mile loop hike using both connections. In 2011 there has been some reorganization of the trail system.

This trail head is about 12 miles west of Cortez, CO on County Road G. The old East Rock Creek loop  has a renamed side loop that is the new East Rock Creek Trail. It circles around the East Fork Canyon and connects back to the Sand Canyon trail head for about a 7.0 mile hike. 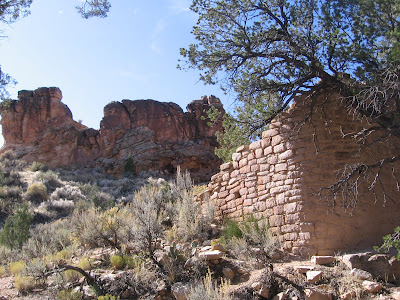 At the trail head, the Castle Rock formation towers over the area. There is a large Ancestral Pueblo ruins site arrayed around Castle Rock and a small arch in the upper west corner. A large section of intact wall is visible on the back side of Castle Rock. 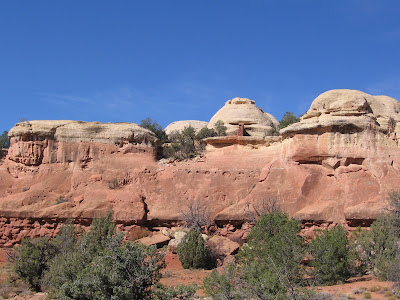 The south connecting trail segment features at least four small ruins sites. Three are associated with alcoves but one wall section appears to be sitting on top of the mesa, something of a penthouse location. At the 2.5 mile post the new East Rock Creek Trail continues north while the old route connecting trail turns back east. (Pictures of the ruins along the connection loop are on the Old System post.) 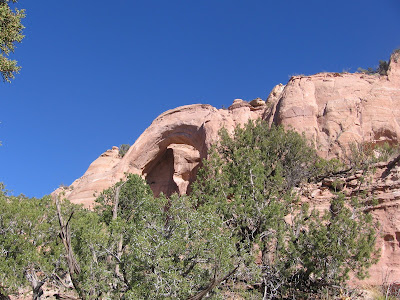 About one mile further down the East Rock Creek loop, a large arch appears on the right. It is possible to climb up closer and see blue sky through the arch. This large arch doesn't seem to get much attention despite being a major feature. 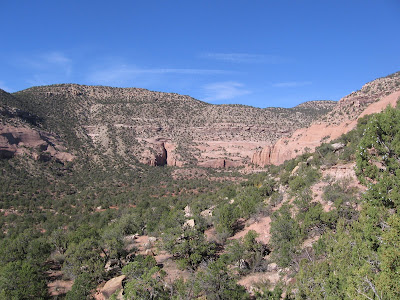 The Rock Creek trail appears to get use from mountain bikers and horse riders but less from hikers. The trail circles around this short but deep canyon. I didn't see any more ruins sites up this otherwise scenic canyon. (I saw more sites on a later hike but there are in the canyon floor area below the trail and easy to miss.) 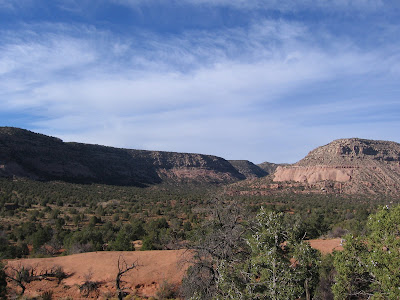 Toward the last segments of the hike there is another formenrly unnamed side loop, in 2011 named the  Rock Creek Trail, that goes around the West Fork of Rock Creek. This is another option in the Sand Canyon Trail system. 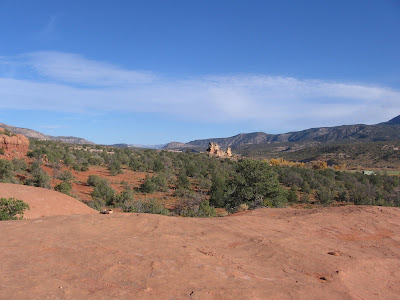 There is one more option on this route. The trail splits about one mile from the end and one can choose the "Horses not Recommended" trail or the Ok for Horses route. The not for horses segment passes over several segments of slickrock and along some sandstone cliffs with Castle Rock coming back into view.

The slick rock option is more interesting for hikers, giving better views and variety of terrain. It took me 3:30 hours to walk the East Rock Creek Trail route.

Posted by Todd Lochmoeller at 5:44 AM