The Mad Dog Tower is in the Sand Canyon area of Canyons of the Ancients National Monument in southwest Colorado. It is vaguely visible east of the Saddle Horn Ruin along the 6.5 mile Sand Canyon Trail about 1 mile north from the South Trail Head. 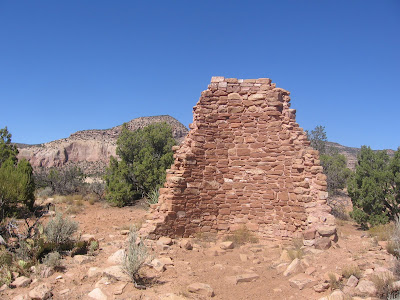 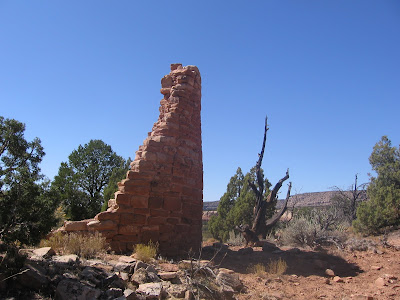 The East Sand Canyon Trail exits at the head of the third side canyon and connects to the drill hole service road. The Mad Dog Tower is very close to the east side of the road. I walked right past it when I hiked in this area before, but it can be seen from the road. Excavation work on this site found a room block, an earth walled kiva with a tunnel and a trash pile midden, but these features aren’t visible on the surface.

I saw a story that the students working on the site were chased by dogs as they traveled to the site every day and named the site Mad Dog in honor of these dogs. It took me 1:30 hours to cover the 3.3 miles to the beginning of the East Sand Canyon Trail and another 1:00 hour to arrive at the Mad Dog site. I didn’t stop to view any of the other sites along the way on this hike. 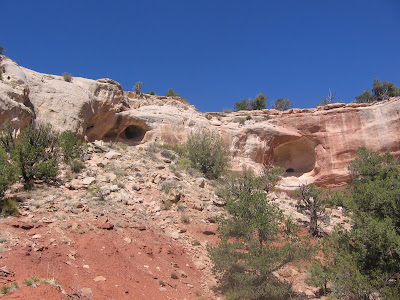 While in this area I explored the alcove areas to the east of Mad Dog. The first area to the east had a small alcove to the left, a larger one in the middle and another large on the right. I could see a small wall section in the smallest of the three possible locations. 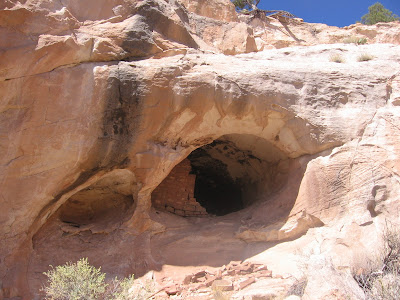 There is a hikeable route along the left near the sandstone wall. The interior of the small opening appeared to be covered with soot. The other two alcoves in this area appeared to be empty. 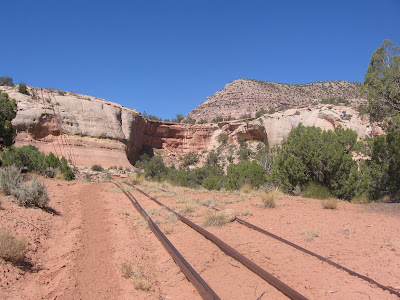 Further east there are some odd pipes approaching from the south that shoot right up to the top of the mesa. These are probably associated with the gas plant that is east of the trail head area. It looks like horse riders use the pipeline route as a trail. There are one or two small sites in the area to the right of the pipelines. 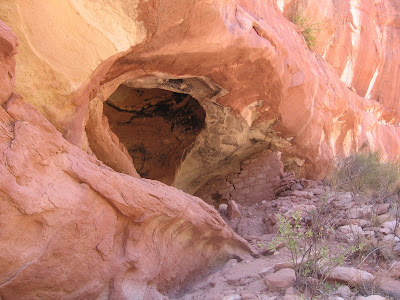 A rough trail leads from the pipes across this rubble strewn area toward the small wall section on the left side of the formation. There is another small wall fragment directly across on the right. This site is about 0.5 miles east of the Mad Dog Tower. I turned around here and followed a two track road that connects back to the drill hole service road at a point a few hundred yards south of the Mad Dog Tower. There are more alcoves and possible ruins sites to the east of where I stopped.

I followed the drill hole road back to the connection with County Road G that is 0.5 miles east of the trail head parking, slipping through a section of private property. There is a locked gate along the drill hole road that prevents motorized access to this area of Canyons of the Ancients. After the 2:30 hours to arrive at Mad Dog I spent 1:00 hour exploring to the east and the return hike took 1:00 hour. My total hike was 4:30 hours on a 70 F degree day in late September. I carried two liters of water.

Posted by Todd Lochmoeller at 6:47 AM