Saddle Horn Ruin is one of the small Ancestral Pueblo Ruins sites on the Sand Canyon Trail in Canyons of the Ancients National Monument in southwest Colorado. There are at least two off the trail ruins sites that can be viewed from a distance in the vicinity of Saddle Horn. (In 2011 the off trail areas are considered to be closed.) 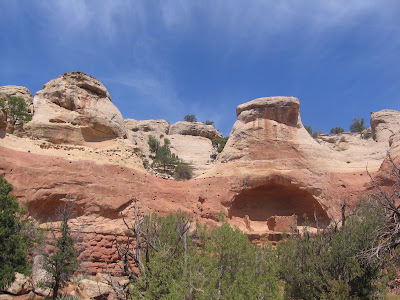 The south trail head for the 6.5 mile Sand Canyon Trail is 12 miles west of Cortez, CO on County Road G. The Saddle Horn Ruin is about 1 mile north along the well marked trail. Turning off the trail and going east and slightly north for a about a quarter of a mile to the rim of Sand Canyon. I scanned with binoculars across to the other side looking for a tower site known as Mad Dog Tower. 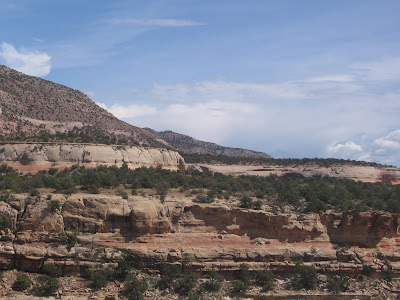 I didn’t see anything from the rim but moving back to a higher spot and repeating my scan several times I finally spotted the elusive tower. It is visible in line with the right side of the large rocky outcrop that is in the middle of this view. It appears to be only about a half mile away but Sand Canyon is very deep and steep and in the way. (I think the Mad Dog Tower can be sighted from the Saddle Horn ruins without leaving the Sand Canyon Trail.) 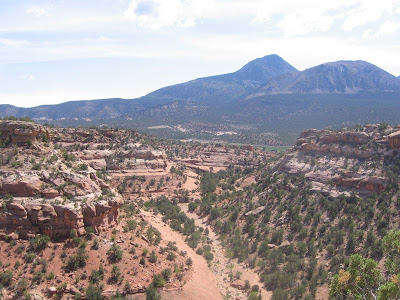 There is an unmarked East Sand Canyon Trail that accesses the area of Mad Dog Tower. Follow the Sand Canyon Trail north for about 3.3 miles to the point where there is a small sign that says “Sand Canyon.” The main trail continues north, but there is also a trail that crosses and turns south toward the side canyons on the east side.

On this hike I tried walking south along the west rim of Sand Canyon to see if there was a shorter route over to the east side. There is a service road for drill holes on the east side but it passes through private property. 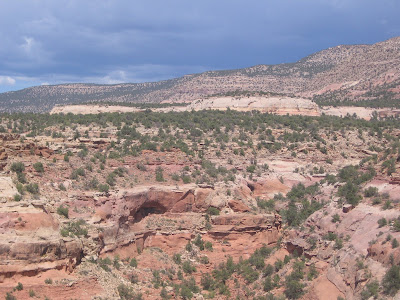 I walked to a point that is about 0.7 miles east of the Castle Rock Pueblo and overlooking the beginning of the drill hole service road.  Looking back north up the canyon I spotted an alcove ruins site that looks like it is in a very inaccessible position. This site is in a short eastern side canyon near the junction of Sand Canyon with McElmo Canyon. There are cliffs both above and below the site and there isn’t any apparent entry point.

I thought this would be a rarely viewed site but I caught a glimpse of it as I drove past the canyon mouth on County Road G. From the view point it was about 0.5 miles across country back to the Sand Canyon main trail and then 0.5 miles back to the trail head. My hike was about 3:00 hours for 3 miles, with much of the time spent scanning for these elusive sites.

Posted by Todd Lochmoeller at 6:34 AM