The Sand Canyon Trail in Canyons of the Ancients National Monument, in southwest Colorado, runs 6.5 miles north and south on the west side of Sand Canyon and passes many small Ancestral Pueblo Ruins sites.

About 3.3 miles up the trail there is a side trail to the east side of Sand Canyon that leads to several more sites. One of these sites is in a side canyon that is back toward the south end of Sand Canyon near the canyon mouth. (In 2011, this area off the Sand Canyon Trail might be considered closed.) 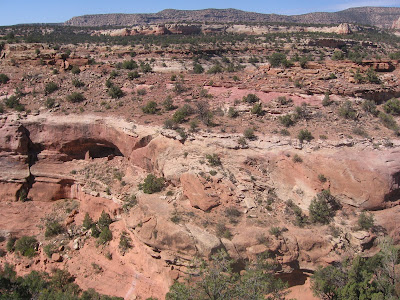 From there I hiked east for another 0.5 miles through the Pinon Pine and Utah Juniper forest to the edge of Sand Canyon. From the canyon rim the ruins site I was heading for is visible in the side canyon on the east side. At the view point the canyon is very steep and deep. 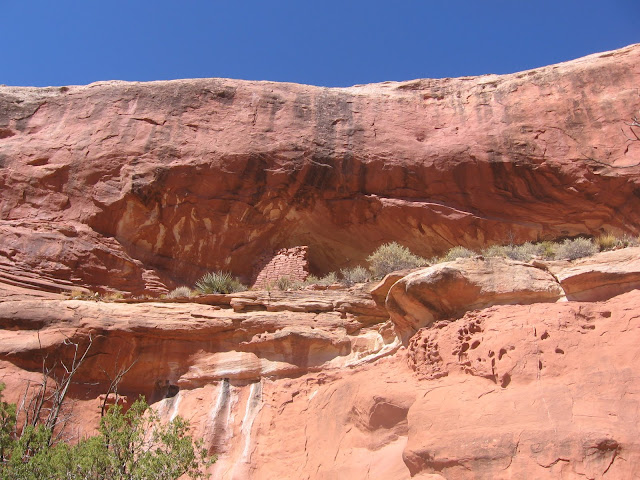 Back to the south a short distance there is a side canyon on the west side that offers a possible route into the main canyon. This side canyon has its own side canyon on the north and I was able to find a way there down to the bottom. Near the bottom I spotted a rebar stake that looks like something the archaeologists install to mark a site. There was a south facing alcove in the vicinity but I didn’t see any obvious ruins.

Once reaching the side canyon bottom the walking is fairly easy toward the main canyon. In the main Sand Canyon there is a vague horse trail leading up the canyon. At first, from above and below it is hard to see how anyone entered this site. It is a total hike of about 1.5 miles to get to the point below the ruins site. 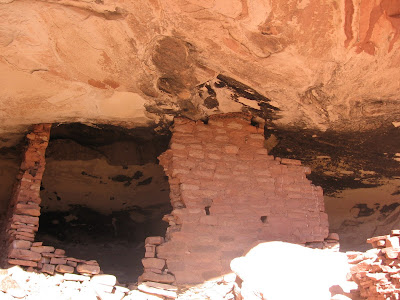 After viewing the site from below, I looked to see if the East Sand Canyon area could be reached by climbing out of this side canyon. It is possible to climb to the east canyon rim area going up the east side canyon. The route requires a little scrambling but is not too bad. I climbed up the south side of the canyon before reaching the canyon head. From above, I could see the ledge that offers a route toward the alcove. It looks like there is a section just before the alcove that might be treacherous.

It also looks like there is a ramp leading to the rim from the ledge. On a later hike, I walked up the ledge and was able to enter the ruin. There is a notch that allows climbing into the site. I looked at the ramp and it looked too risky for one person to try alone. Perhaps two persons together could help each other up. 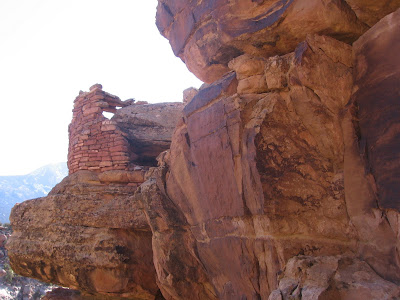 Looking back at the alcove from up the canyon I had noticed a wall fragment above it and to the left. I don’t think this wall section is visible from the west side angle. It looks like a castle rock type of site is above.

On the later hike I climbed out of the canyon on the north side near the canyon head and was able to get closer to this site. The wall section appears to be part of an isolated lookout tower. I didn’t see any other structures up on top. It is possible to climb in or out of the east side canyon on either the north or south sides, but there isn’t a marked route. 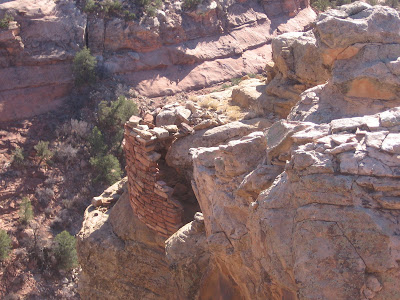 From this area it is about 0.25 miles east to the drill hole service road and the vicinity of the sites near and east of the Mad Dog Tower site. I returned to the main trail head using the 1.5 mile drill road route, but this road passes through a short section of private property.

My total first hike was about 3 miles and took 3:00 hours on a 70 F degree early October day. The revisit hike was on a 50 F degree day in late November and I spent some time getting closer to these two sites.

Posted by Todd Lochmoeller at 11:48 AM