The Cahone Trail is an officially unnamed access route into the often difficult to access Canyons of the Ancients National Monument in southwest Colorado.

The trail head is 4 miles west from Highway 491, along County Road R from the small town of Cahone, Colorado. This canyon area is part of the Cahone Canyon Wilderness Study Area. 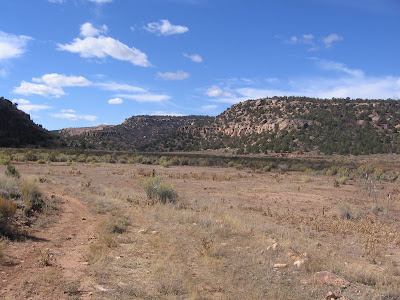 Road R reaches a dead end at a brown easy to open gate. An old two track road leads northwest, easily down into a side canyon of the upper end of Cross Canyon. It is about 1.5 miles of hiking to the main Cross Canyon. The junction of the side canyon with Cross Canyon is a broad flat area of sagebrush fields with several other side canyons meeting at the same point. The old road continues to the north.

Three deeply cut washes join at this point with a small flow of water at the bottom. I chose to hike south and followed cow trails down into and across the wash over to the west side. About 0.3 miles south there is a short side canyon on the west that seemed to offer the cliffs and large boulder foundations often associated with Ancestral Pueblo ruins sites. 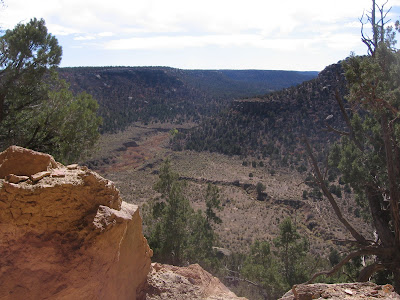 I scanned the cliff areas with binoculars and didn’t see anything but decided to climb up anyway. I made my way up the side canyon below the rim and passed many locations that looked like good building sites but didn’t find anything except good views to the south.

At the upper end of the side canyon I descended down the rocky wash and returned to the bottom. Scanning again with binoculars I saw a wall section under a rocky overhang nearly all the way to the rim. So I had to climb up a second time. 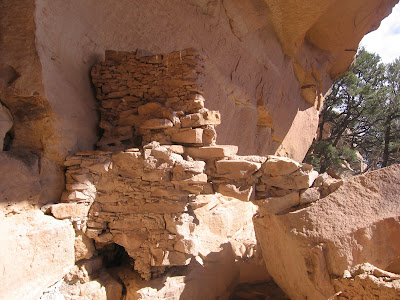 The wall fragment is hidden by trees and boulders and is visible only from the right angle, but the rock overhand covering the site is clear from many angles. I could only see an entrance into this protected site from the left side. There is a small fragment to the left of the remaining wall, suggesting that the whole open front was once walled in. 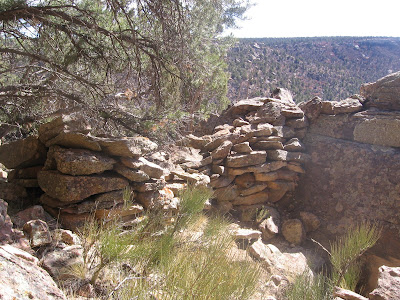 I slithered along the front of the site avoiding the steep drop off to look at the right side. On the right side there is a dry wall perimeter structure that is standing up well. I saw a corn cob along the way. 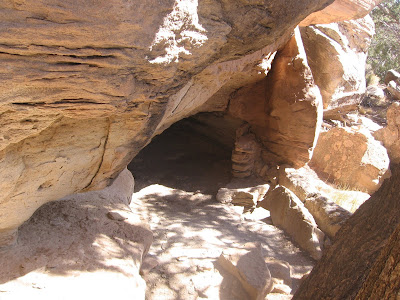 Further to the right there are two smaller wall fragments in small alcoves. I didn’t see a way to exit from the right side and had to return the way I came back to the left side of the site. This was the only site I saw in this area, but they are often hidden and easy to miss. At the canyon bottom near the side canyon junction there is a rubble pile that may be a site but it wasn’t very definite.

I spent about 3:30 hours hiking and climbing to find this site though the distance was only about 2 miles. The return hike took 1:15 hours for a total hike of 4:45 hours for about 4 miles. It was a 65 F degree mid October day and I carried 3 liters of water. There are many more locations to explore in this area, both up and down Cross Canyon. 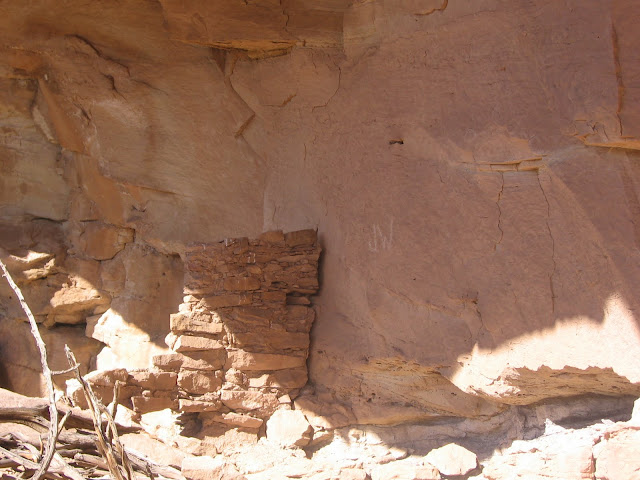 I thought it odd at the time, but there are initials “JW” inscribed on the back wall of this site. This is a remote, hard to find site so why would there be graffiti here? After viewing a similar “JW” on the right end the well known Spruce Tree House ruin at Mesa Verde, it occurred to me that JW could be John Wetherill, one of the famous Wetherills that were instrumental in the development of Mesa Verde and other Four Corners ruins sites as places of major interest.

So John Wetherill may have visited this otherwise obscure site and left an historic inscription. Besides exploring the Cahone Trail, John Wetherill established trading posts in southeast Utah and led expeditions into the backcountry near Navajo National Monument, Monument Valley and Rainbow Bridge National Monument. I didn’t see a year carved here but one could guess around 1890.

Posted by Todd Lochmoeller at 2:18 PM