Sandstone Canyon is one of the Canyons of the Ancients, located to the east of Mockingbird Mesa and west of Pleasant View in southwest Colorado.

The hiking starting point is the normally closed gate next to the Carbon Dioxide processing plant 8.5 miles south along County Road 12 from County Road CC. Instead of hiking along the gravel road I stayed close to the canyon rim. 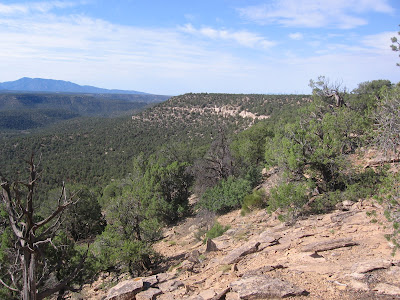 For first time hikers in the Mockingbird Mesa area, there is an Ancestral Pueblo ruins site directly behind the gas plant close to the Sandstone Canyon rim. There is another large rubble pile site about 0.5 miles south on the west side of the gravel road at the point where the road is very close to the canyon rim.

There are also at least two boulder based sites visible down in the canyon in the first 0.5 miles. I skipped past all of these, looking for more sites further south. 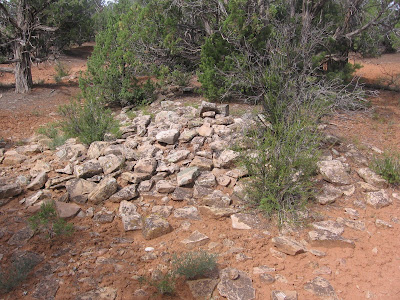 After 1:30 hours and about 2.2 miles I came across a small mesa top rubble pile site that was about 100 feet from the canyon rim. I noticed several pottery shards that had washed down that led me to the site. The hiking along the rim was level and easy with a vague deer trail to follow.

The views are good along the rim and I stopped frequently at good overlook points to scan the canyon bottom with binoculars. There are some possible ruins sites down in the canyon but I couldn’t tell for sure. 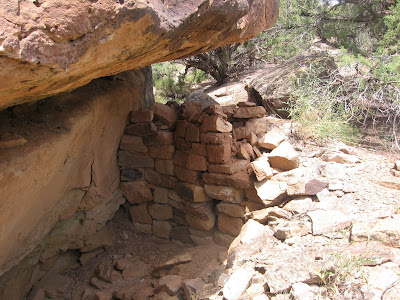 In another 0:30 minutes I arrived at a south facing point overlooking the area where water from Sandstone Canyon drains down toward Yellow Jacket Canyon. Below the south facing point there are two boulder based ruins sites very close to each other.

The eastern most site has a wall section holding together under the shelter of the boulder. There is a small amount of rubble on the top of the boulder. There are other large boulders nearby that could have been chosen as building sites, but weren’t and I didn’t see any structures on the canyon rim. 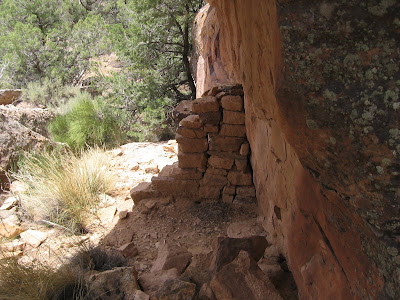 Hiking west back toward the rim, I came across another boulder based site only about 100 yards to the west. I was surprised that these two were so close together. The further west of the two sites is also mostly rubble with small wall sections still intact and seemed a little larger than the eastern site. There was rubble remains on two boulders at the west site. One of the two large boulders is very close to the rim but not attached to it. 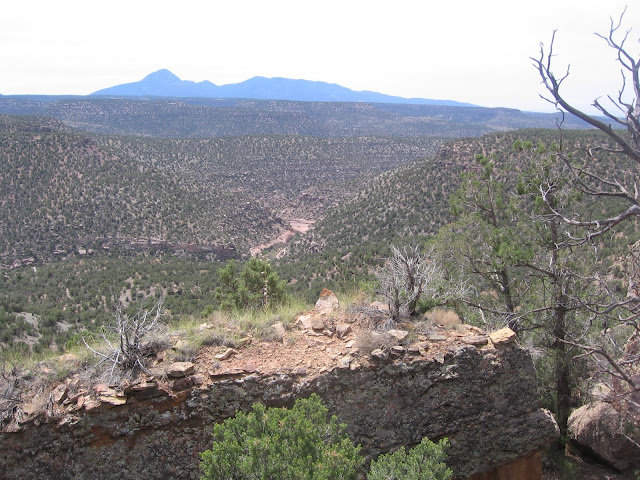 These two boulder sites have a spectacular view south toward the Yellow Jacket Canyon area. There may be a large pictograph panel near this canyon junction. Getting down to the drainage below looks feasible but the cliffs look steep, so it’s not clear if this is a good route for finding the panel. 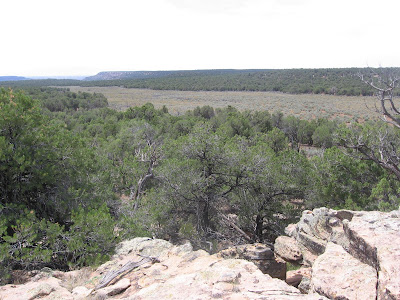 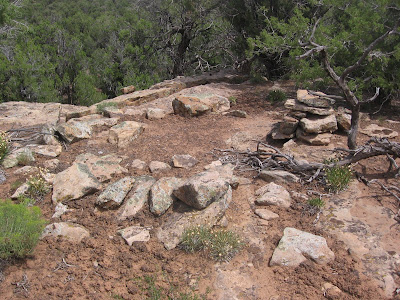 My return hike took 1:30 hours and I finished the last 1.5 miles on the gravel road. My total hike took 4:30 hours for about 6 miles. The starting temperature in late July at 9:00 AM was about 70 F and it was about 88 F at 1:30 PM. I carried and drank 3 liters of water. The biting gnats that are a nuisance in these canyons in June are out of season by late July.

Posted by Todd Lochmoeller at 6:09 AM