The large mesa top Lowry Ruins is one of the featured sites in Canyons of the Ancients National Monument in southwest Colorado. It sits on a hilltop between two forks of the head of Cow Canyon and is the center a large community of outlying sites.

Near the parking area a primitive road heads south and allows hikers to explore for some of the surrounding sites. Lowry Ruins is located 9 miles west of Pleasant View, CO on County Road CC. 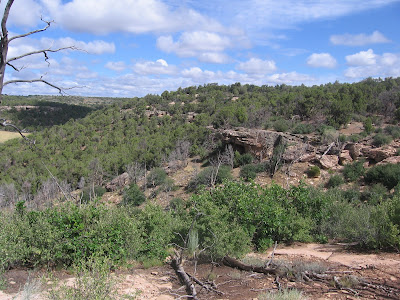 I hiked south of Lowry Ruins along the primitive road for about 0.5 miles, and then turned west to the east rim of the Cow Canyon west fork. Scanning with binoculars, it looked like there was a nearby alcove site below a canyon rim and further on I could see a rubble pile in a higher layer of cliffs. The alcove site was a little vague but there was a rubble pile under the cover of a shallow rock covering. 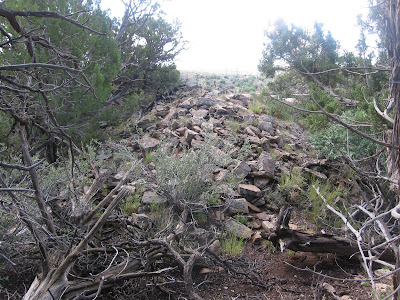 The rubble pile site was a little tricky to find, even though it was clearly visible from a distance. From above it was hard to get a good angle to view it, and several trees have taken root right in the middle of the site. It took me 1:00 hour of scanning and hiking to arrive at this moderate sized site. 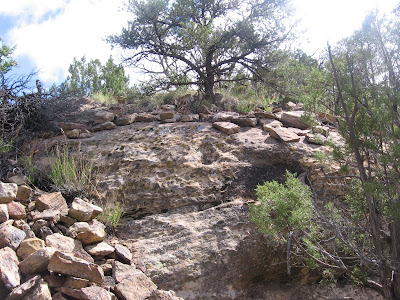 From below, it appeared to be based on a large boulder with a lot of rubble having slipped off and formed a pile down below. I spent about 1 hour exploring the area around these two ruins sites. After viewing these sites I hiked slowly south about 1 mile along the east rim of the west fork to the point that overlooks the junction of the two forks of Cow Canyon. I didn’t notice any ruins sites along the way to the point. 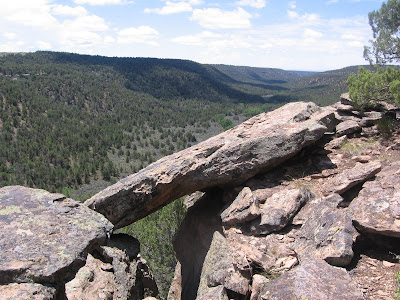 This junction had very steep cliffs and a good view down Cow Canyon. I thought that the jumble of rocks at the point looked like a good location for ruins site but all the sites in this area appear to be closer to the canyon bottom in the east fork, which seems to have better southern exposure and was closer to the water source. Continuing back north along the rim I saw three likely boulder based sites well below the rim, close to the creek at the bottom. The northern most of these three sites I had visited before. On this hike, I only viewed these sites from the rim.

My total hike took 4:40 hours for about 4 miles. I carried and drank 3 liters of water on a 75 F degree day that had higher humidity than is typical in this area.

Posted by Todd Lochmoeller at 5:53 AM