Negro Canyon is to the east of Hovenweep Canyon and west of Sandstone Canyon in the Canyons of the Ancients National Monument in southwest Colorado. The upper trailhead for the Hovenweep Cutthroat Castle Trail can be used as a starting point for a hike to the west rim of Negro Canyon. This area is about 10 miles north of the Hovenweep Visitor Center on County Road 10.

There is an old road that branches off near the Cutthroat Trail Head and descends into Hovenweep Canyon. As this road passes below the Painted Hand Pueblo site, there is a side road that climbs to the east rim of Hovenweep Canyon. This side road can be spotted easily from the rim area above, but is easy to miss down below if you’re not watching for it. 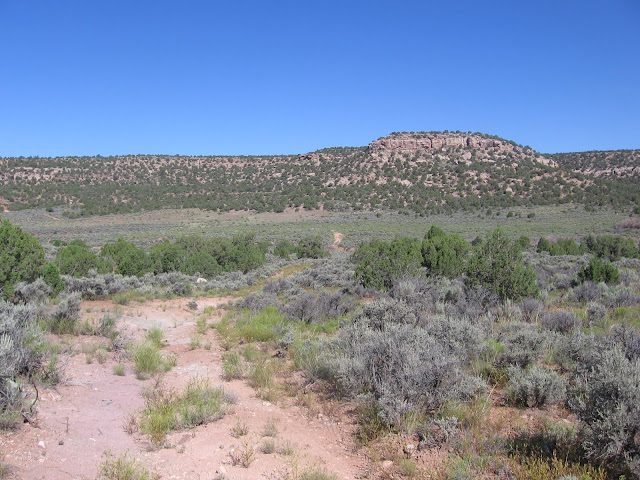 At the rim, the mining road continues south but I turned east off the trail and walked the short 100 yard distance to the west rim. It took 1:00 hour of hiking to get to the west rim of Negro Canyon.

Scanning the rim area to the north and south with binoculars I spotted an Ancestral Pueblo ruins site in the level area below the cliffs. In the area overlooking the site, there is a drainage that offers a way down, though it is tricky and there is an easier route about 200 yards to the south. 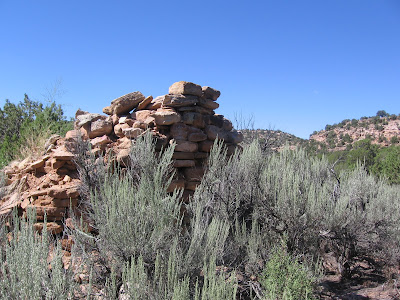 The site spotted from the rim looks like it is spread out on both sides of a drainage, or it could be considered to be two sites. The structure to the north has a large section of wall holding together on one side and looks like a large rubble pile on the other sides. 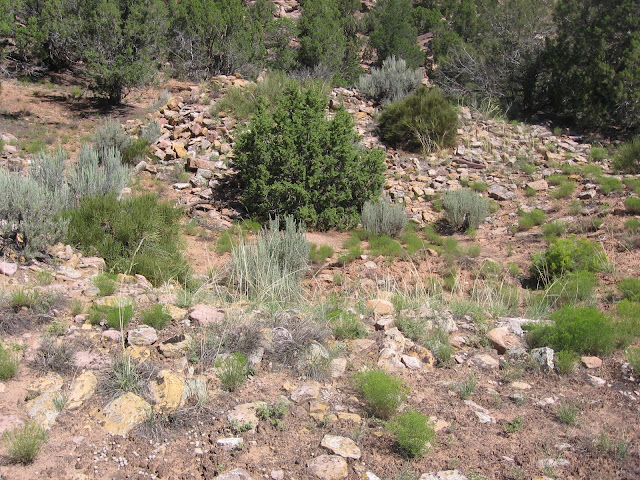 Just south across the small drainage there is a circular looking structure. Rubble piles form the circle and there is a depression in the middle. The amateur observer might think this resembles a great kiva. I didn't want to climb back to the rim the same way I came down and walked south where the cliffs appeared to be easier to climb. There were some alcove formations along the way, but I didn't see any signs that they had ever been used. 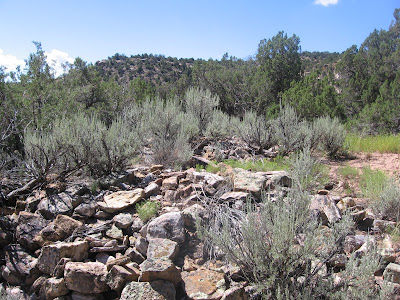 About 150 yards south I came across another rubble pile site. This site also appeared to be circular and appeared as rubble piles. This site is close to the base of the cliffs and the forest is thick enough that it is obscured unless you are very close to it. The cliffs are easier to climb in this vicinity than where I descended and I made my way back up to the rim.

The canyon rim makes a bend to the east above the second site and gives a good view back to the north. Scanning back north I saw a ruins wall section north of the first ruins site and decided to walk back, about 0.4 miles to look closer. 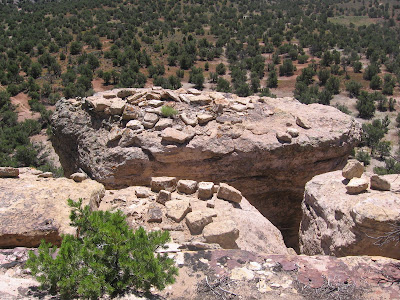 Above the wall section there are some rubble remains of a rim site. This site is at the south junction point of a short side canyon off of the main canyon. Across Negro Canyon is Mockingbird Mesa and the large power lines to the industrial sites there are visible. 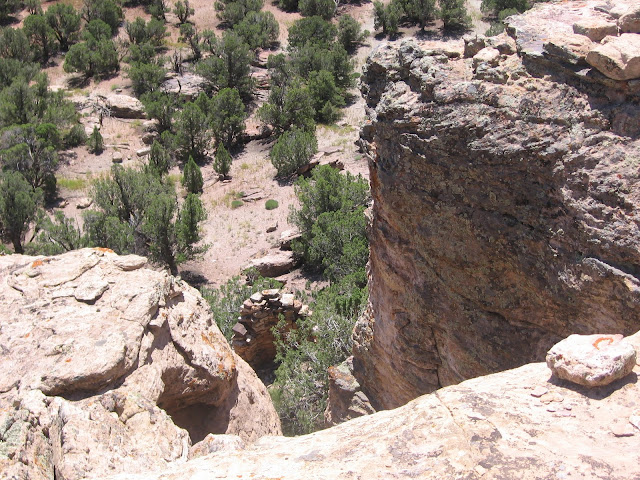 The wall section that I saw from the distance appears to be part of a circular tower that has a precarious perch over a steep cliff and is well below the rim top rubble remains. There is a notch in the cliff that might be a steep and narrow way down, but I didn't try it. It was hard to get a good angle to see the tower from the rim above. A juniper tree has taken root and perfectly blocks the view. Unfortunately, I didn't notice this structure when I was down below, only about 200 yards to the south.

There are some rough 4WD trails in the area below the tower. There is a road that enters the north end of Negro Canyon but there is a normally closed gate that blocks unauthorized vehicles, though a hiker or mountain bike can enter. 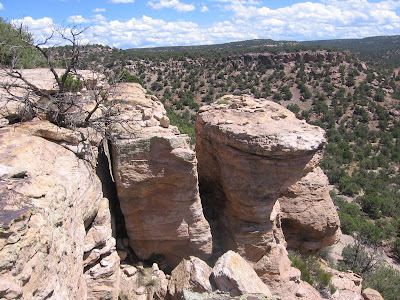 The view of the tower wasn't better from the south angle, but there is a good side view of the overall site. If a tower in this position was used for communication, there might be another to look for on the east side of Negro Canyon. I spent about 2:00 hours in the area of these three close together sites.

From a previous hike I know there is another boulder based site about 0.5 miles north of this area along this same rim. My return hike from the tower site took 1:10 hours for a total hike of 4:15 hours. The temperature at 9:30 AM was 70 F and it was 82 F at 1:45 PM on an early August day. I carried and drank 3 liters of water.


Posted by Todd Lochmoeller at 5:12 AM