There is an access to the north rim of McLean Basin along the dirt road trail that turns west from County Road 10 1.1 miles north of the east turn to the Painted Hand Pueblo Trail in Canyons of the Ancients National Monument in southwest Colorado. The McLean Basin is a large feature just west of the outlying sites of Hovenweep National Monument. 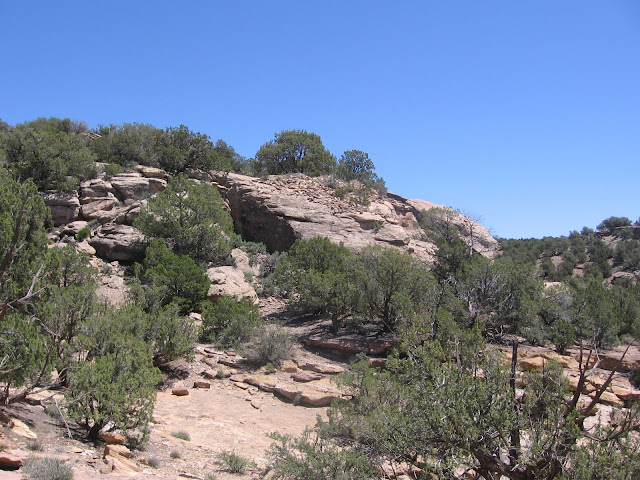 The turnoff is also about 0.4 miles south of the Canyons of the Ancients sign if traveling from the north. On a previous hike, I walked the 1 mile distance to the east rim of a short side canyon that has a boulder based Ancestral Pueblo Ruins site just below the west rim.

For this hike I drove close to the to the rim and began hiking there, crossing and passing by the same site. (In 2012 this road may be closed to vehicles. It might be tricky to find a place to park along the main Road 10 if this road is closed. Use labels to find McLean Basin Northeast for more pictures of the first part of this hike.) 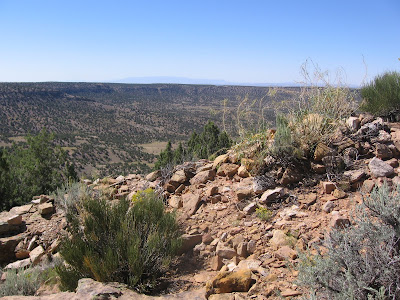 On the previous hike, I had spotted a rubble pile about 1.5 miles further west on the north rim, but didn’t make it that far. I also saw a second boulder based ruins site on the opposite side of the point from the first site, but it was below steep cliffs and not easy to visit from where I was able to view it.

After reaching the mesa top, I hiked northwest around the next side canyon, then southwest until I reached the rubble pile, perched on the rim overlooking the wide McLean Basin. 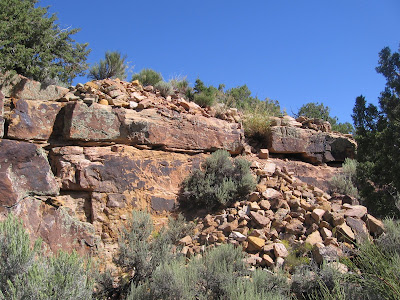 It took me 1:30 hours to arrive at the rim rubble pile. Descending just below the rim, the rubble pile spills over the side down onto the lower level. 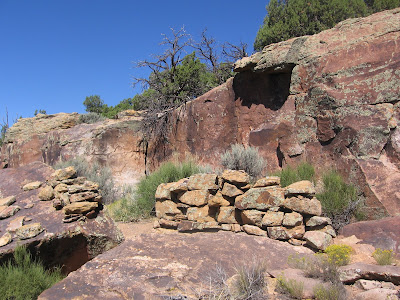 Looking over to the left, there is a wall of large stones, with more large stones on top of a boulder. There were a number of corrugated pottery shards in view at this site. From this site I hiked further west along the rim for 0:35 minutes until I arrived at the road that ascends from McLean Basin. At the road, a hiker could turn right and explore further north along the east edge of Cross Canyon or turn left and descend easily into the basin. 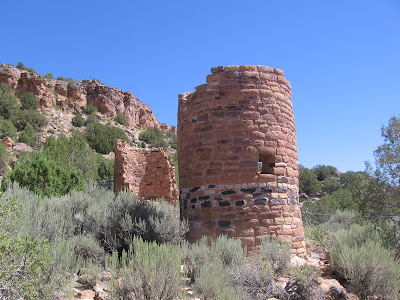 I chose to turn left and descend and pass by the elusive McLean Basin Towers. I had hiked to the towers previously, starting on the basin south rim on the Pedro Point Road and crossing the basin. I was 3:00 hours into my hike when I arrived at the twin towers. 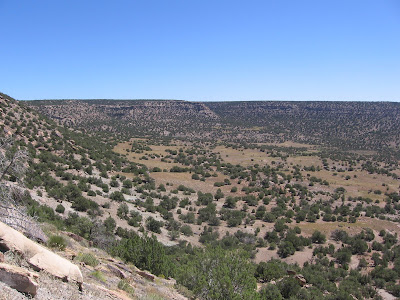 From the towers, I hiked northeast, across the bottom toward the side canyon where I started. This route makes the hike more of a loop, and allows an approach to the boulder based site that I had previously viewed from the rim. There are two old stock ponds on the basin floor, with a cow trail between them that provides a trail for part of the distance. It took me 1:10 hours to get from the towers to the boulder site. 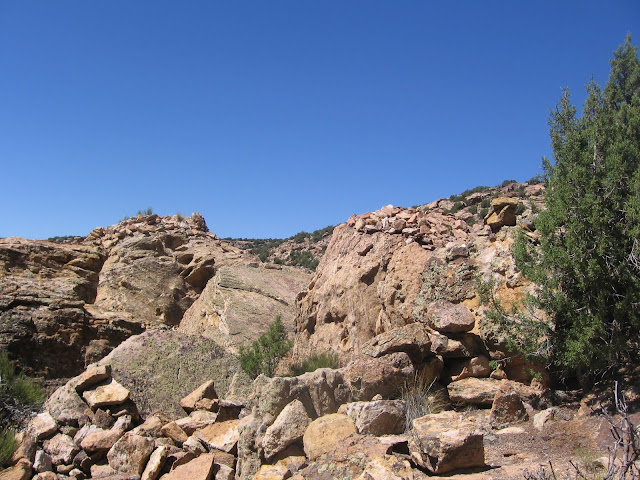 This site is very rocky and appears to be centered on two structures perched on side by side large boulders. A lot of rubble has spilled off the boulders and is piled up around the base. There is a small rock art panel at this site, but it didn’t look aged and weathered like they usually do. One of the figures looked like a turkey foot. 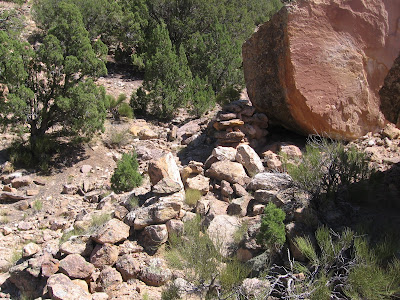 There are some wall structures built with large stones, similar to the site that is on the rim. That site is in view as I hiked to this one, above and slightly to the west. From here, I hiked east around the point, and back up the side canyon where I started. There is something of a ledge midway up the slope that is easier hiking than the canyon bottom.

This last leg took 1:30 hours, longer than I thought it would. My total hike was 5:45 hours for about 6 miles on a 75 F degree early September day. I carried 3 liters of water.

Posted by Todd Lochmoeller at 3:27 PM