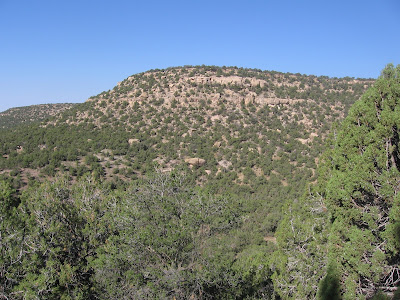 I started my hike at the place I call the Green Tanks trailhead. This old drill site is about 5.5 miles north of the marked east turnoff to the Painted Hand Pueblo Trail along County Road 10, and about 14 miles north of the Hovenweep National Monument visitor center. From the parking area, about 100 yards south there are notches in the steep cliffs that allow a descent into Ruins Canyon. (In 2012, this drill site has a gate blocking the entry. You can still hike here but it is tricky to find a good parking place.)

There isn’t a marked trail but it is feasible to walk down the slope. The elevation change is about 400 feet. On a previous hike I visited a boulder based small Ancestral Pueblo ruins site that is visible from the rim, a short distance up the west slope from the canyon bottom. On this hike I went past this site again and climbed up to the mesa top area above. It took me about 1:00 hour to cross Ruin Canyon. 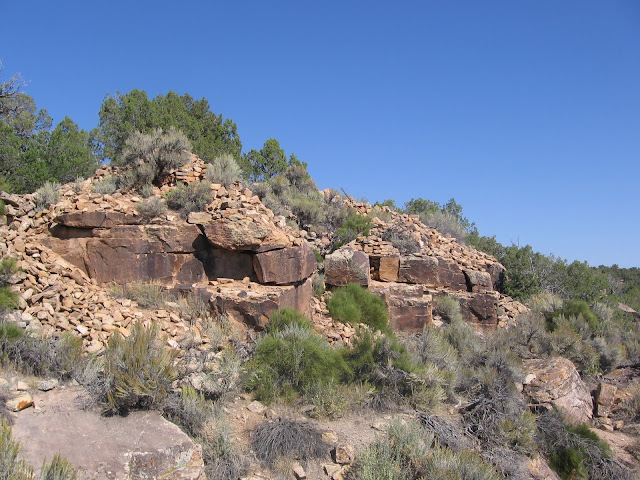 Only two minutes of hiking west from where I arrived on the mesa top there is a side canyon with a large ruins site on the west side. Here, there is a choice of crossing another canyon or hiking north around the canyon head. I chose to take the relatively easy level walk around, arriving at the site 1:40 hours into my hike. 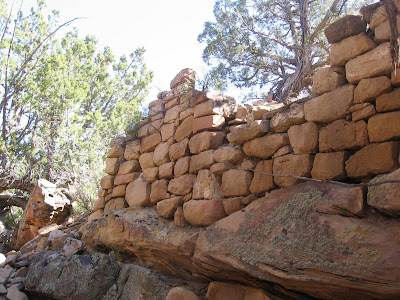 This site extends for a relatively long distance along the canyon rim and spills over below the rim. It appears as mostly large rubble piles with a few wall sections holding together. There are notches in the rocky canyon rim to get views from below the rim. 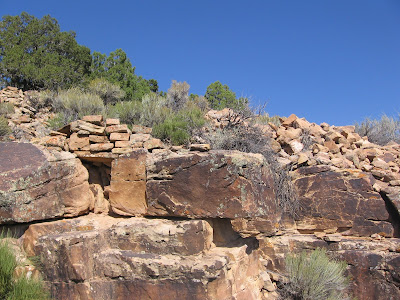 There were several vertical rock surfaces below the rim, but I didn’t see any rock art. The pottery shards visible in the ruins area were mostly the corrugated style. 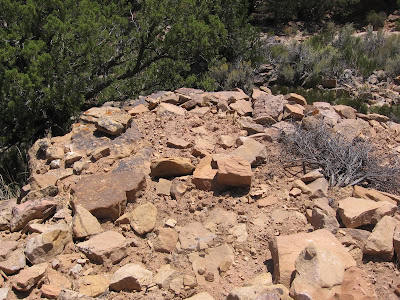 On a large boulder below the main rim structures it looked like a circular tower once stood. From this site, I navigated west using a compass across the mesa top, looking for the east rim of Cow Canyon. It took me about 0:45 minutes to cross.

Along the way I passed one mesa top archaeology site. It appeared as some low sagebrush overgrown mounds with a concentration of pottery shards and some rock work visible, but didn’t look like a village where people would live. Some of the pottery I saw had painted designs rather than all corrugated styles. The Pinon Pine and Juniper forest is mostly open enough to walk through easily with some zig zagging around fallen trees and shrubs. 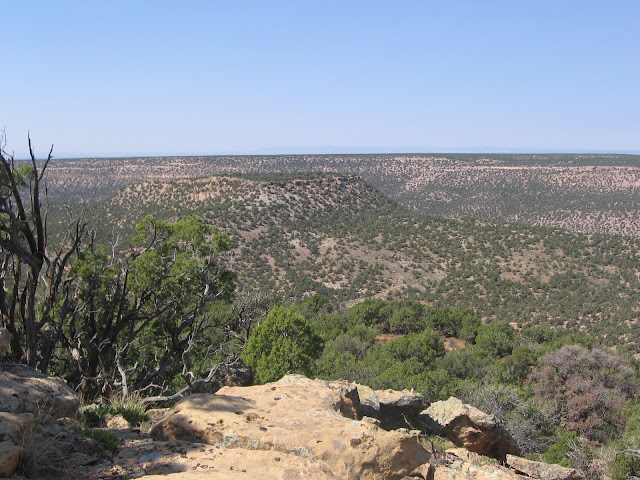 I arrived at a point on the east rim of Cow Canyon that overlooks the junction of Cow Canyon with Cross Canyon 2:45 hours into my hike. There is a large sky island in the middle of the canyon junction area. I scanned the area with binoculars but didn’t see any large ruins sites along the canyon rim areas.

Looking north up Cow Canyon, the mesa top area where Lowry Ruins sits is visible about 3 miles away. Many of the ruins sites in this area are below the canyon rims and aren’t visible from a distance. 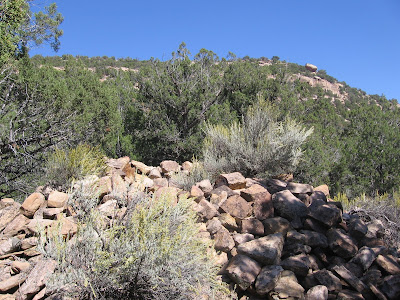 I recrossed the mesa top, and the side canyon, navigating with a compass, and arrived at the west rim of Ruins Canyon about 400 yards north of where I had originally crossed. As I was descending from this different angle, I was lucky to spot another ruins site near the bottom. This site is very hidden by the forest and would be hard to spot from an angle other then directly above it. It appears as a circular cone and is hollow in the middle like a dead volcano. On the east side, there were two lines of low walls between the ruins structure and the creek at the canyon bottom.

My total hike from Ruin to Cow Canyon took 5:30 hours for about 6 miles on an 80 F degree late September day. I carried and drank 3 liters of water.


Posted by Todd Lochmoeller at 6:29 AM