The lower part of Rock Creek Canyon can be visited on parts of the popular Sand Canyon Trail system in Canyons of the Ancients National Monument in southwest Colorado. Rock Creek Canyon has an east fork and a west fork with trails circling around both forks. 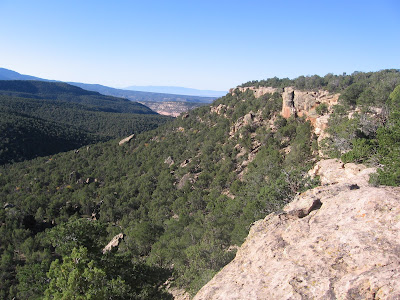 At the start of the hike there are also some views of the San Miguel Mountains far to the north. The area of this hike is shown on the north part of the Sand Canyon Trail Map that is available at the Anasazi Heritage Center in Dolores, CO. 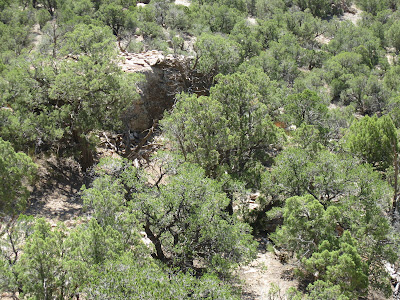 If you walk along the well service road, there are pullover points where there are good views up and down the canyon. The first pullover view point is about 10 minutes of walking from the junction with the main road. At this overlook point I noticed a boulder based ruins site below the rim. Looking closely, there is rubble on the top of the boulder and rubble around the base. There are two levels of cliffs to get past to get to it. I didn’t see an easy way past the second level, so just viewed it from above. 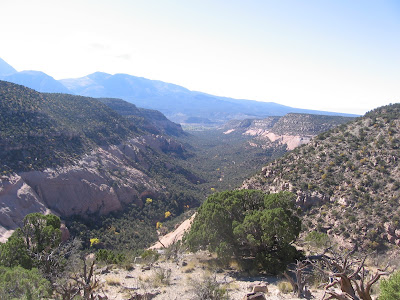 While hiking along the rim, an exploration road is visible in the canyon below. The exploration road enters the canyon from the east side, crosses the canyon bottom and heads south, more or less parallel to the rim road. These two roads eventually intersect about 2 miles south from the lookout point. I arrived at the intersection after 1:20 hours of hiking and decided to follow the exploration road down below the rim.
There were spectacular canyon views down Rock Creek Canyon. I walked out to a point that I thought would be a good site for a lookout tower, but only got the good views. 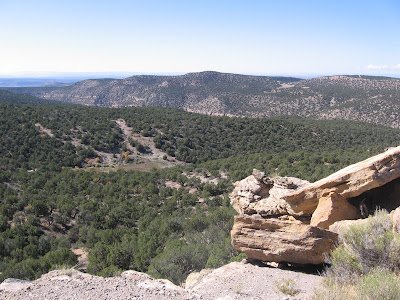 The exploration road crosses the canyon bottom and then circles south and east as it climbs the east side. I was 3:10 hours into my hike when I reached the mesa top area. There are more good views back toward the area where I had just hiked. 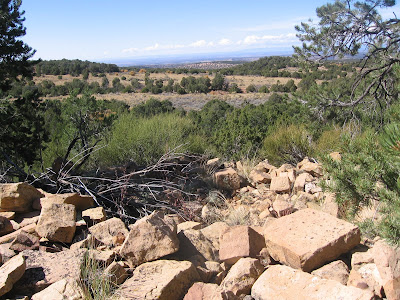 The trail continues south and east when I wanted to go north and west back toward my starting point. As I was looking for a shortcut, I spotted a rubble pile on the east side of a sagebrush field area, sitting up on a low rocky cliff overlooking a drainage. This site appeared to be circular and open in the center. There was some additional rubble extending down the hill, but overall it appeared to be a small site. There is at least one more ruins site in this area that I noticed on the hike I called Sand Canyon North Overlooks. 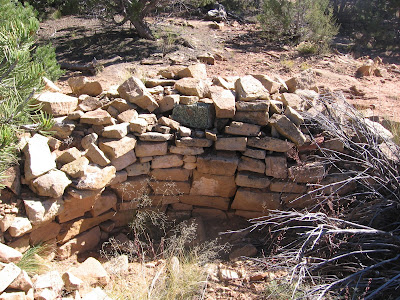 Some of the wall was still holding together on the inside. From this ruins site I continued hiking north, not on the exploration road, which continued south and east. An arm of the canyon extends east so hiking has to stay straight north to get around it, but a short cut is possible. From the ruins site it took me another 1:40 hours to return to my starting point. The last mile was along the main gravel road that enters the area. My total hike took 5:25 hours for about 10 miles. It was a 58 F degree mid October day and I carried 3 liters of water.

Posted by Todd Lochmoeller at 8:44 AM