Hovenweep Canyon in Canyons of the Ancients National Monument in southwest Colorado can be hiked across using the old mineral exploration roads. Starting at the Upper Trailhead for the Cutthroat Castle Trail, the west rim of Negro Canyon, the next canyon to the east, can be reached with about 1:00 hour of easy hiking.

This area is about 10 miles north of the Hovenweep National Monument Visitor Center along County Road 10, then east on the marked turnoff to the Painted Hand Pueblo. 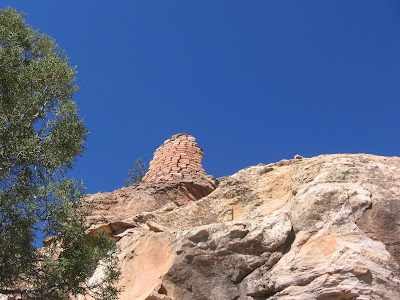 Below the west rim of Negro Canyon, there are three Ancestral Pueblo Ruins sites visible. One of them includes part of what looks like a circular tower perched halfway up a cliff, with some rubble remains on the rim.

It takes a few minutes of searching along the south section of the canyon rim to find a route down to the canyon floor. In the vicinity of these ruins sites, there is a vague ATV trail that leads east toward the dirt road that runs along the bottom of Negro Canyon, near the dry creek bed. The dirt road appears on the Canyons of the Ancients map as Road 4532. 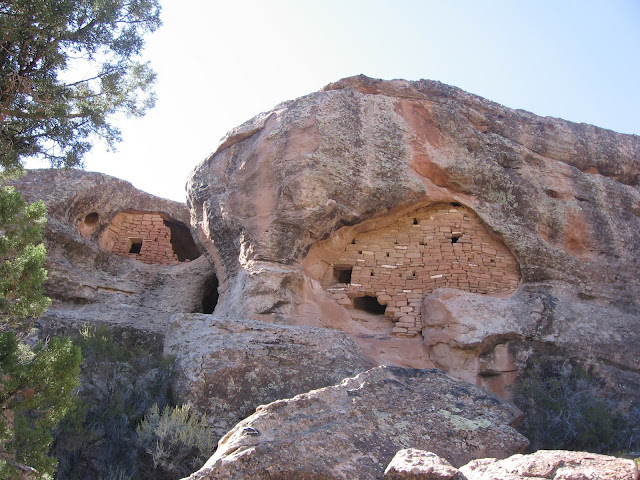 Hiking near the dirt road at the canyon bottom, I spotted some unusual structures in the cliffs to the south. 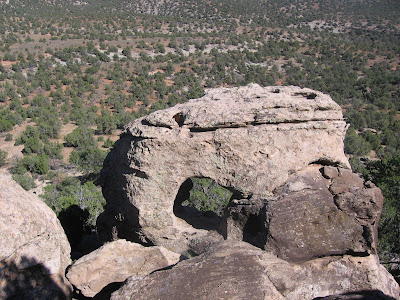 These two walls are north facing and appear to enclose small alcoves in the rock face. More often, hikers see circular granary structures in locations like this. There is also a small arch in this same area. 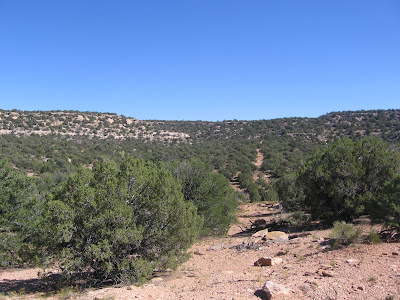 From the bottom of Negro Canyon, I continued east along the south side of a side canyon, climbing toward the east rim and Mockingbird Mesa. The Mockingbird Mesa area is said to have a very high concentration of archaeological sites, and is also an area that has some industrial activity, mostly carbon dioxide and oil and gas wells.

There is a good road traveling the length of Mockingbird Mesa but it is blocked to vehicles by a normally closed gate. Hikers can enter the area and explore on foot. 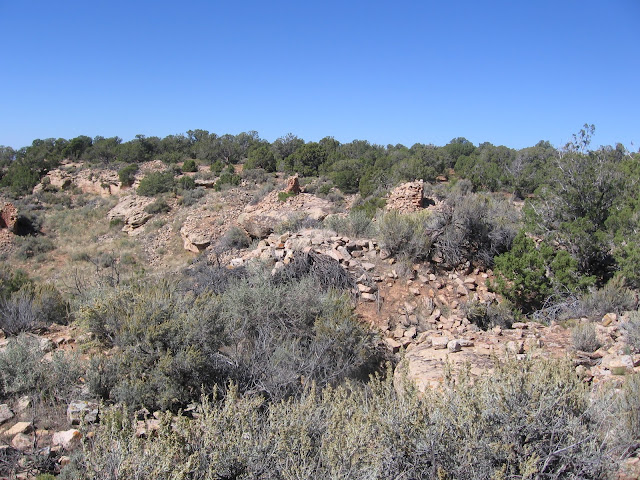 While hiking northeast along the south side of the side canyon, I spotted a very large ruins site at the head of the side canyon. There is another old exploration road that crosses this area. It connects vaguely to the Negro Canyon bottom but I didn't notice it there.

I came across it along the way and followed it to the canyon rim. The large site is easily visible from the road and it is a short walk along the rim over to the site. It was 2:40 hours into my hike when I arrived at this large ruins site. 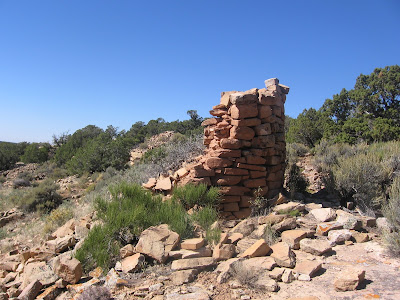 Amidst all the rubble, there are several wall sections still standing. Most of this site is along the rim and just below the rim. 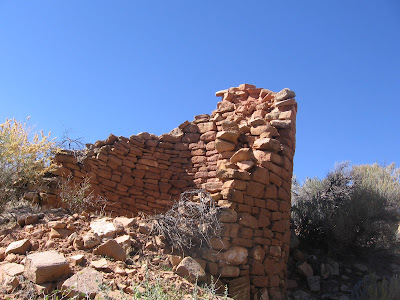 The site didn't appear to extend back into the forest area. There is a drainage in the middle of the site. I didn't see any flowing water or any vegetation that indicates a lot of water, like Hackberry or Cottonwood trees. I think this site is known as the Seven Towers. 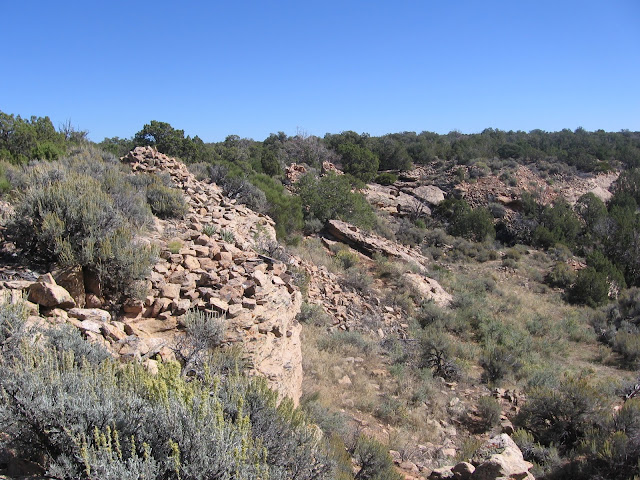 My return hike took 2:50 hours. I used the old road for easy hiking all the way from Mockingbird to the bottom of Negro Canyon. It was on the return hike that I detoured off the ATV trail and looked at the small arch and the small walled in alcoves. In the area near the alcoves there are more spots to climb to the west rim of Negro Canyon.

From the Negro Canyon west rim it was easy hiking along the old road, across Hovenweep Canyon, back to the starting point. My total hike was 6:00 hours for about 9 miles on a 70 F degree mid October blue sky day. I carried and drank 3 liters of water.

Along the total route from the west Hovenweep Canyon rim, across Negro Canyon, to the west rim of Mockingbird Mesa, I saw four modest ruins sites and the one large one, not counting the publicized Painted Hand Pueblo. Almost all of this hike into the Ancients backcountry can follow existing old roads and trails.

Posted by Todd Lochmoeller at 2:57 AM