Ruin Canyon is visible along the west side of County Road 10 in Canyons of the Ancients National Monument in southwest Colorado. The canyon head is southeast of the developed Lowry Pueblo Ruins site and it flows southwesterly, parallel to Cow Canyon and Cross Canyon. There is an access at an old drill site that has some green tanks, about 14 miles north of the Hovenweep National Monument Visitor Center. 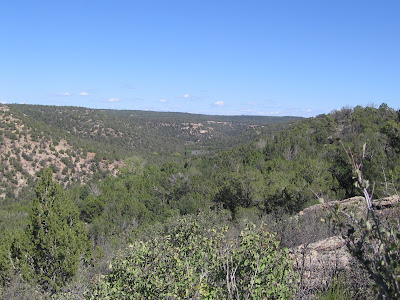 I tried hiking along the east rim of Ruin Canyon, northeast toward the canyon head. In the vicinity of the green tanks trailhead, there are at least two small Ancestral Pueblo ruins site near the deep canyon bottom, and a large site directly west across the canyon. The hiking along the rim is very close to County Road 10 for the first ten minutes, and then stays behind the irrigated hay fields the rest of the way. I tried to stay as close to the rim as possible, stopping frequently to scan the west side cliffs and looking for ruins sites along the east rim. 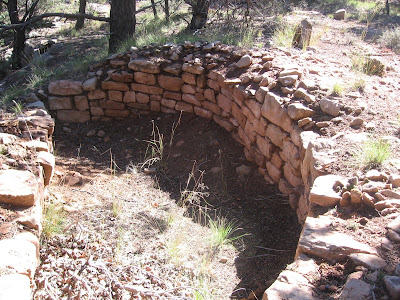 I saw at least two, maybe three small sites along the east rim in the first 1:10 hours of slow hiking. The most interesting was a D shaped site on the rim. It appears to be about the size of the circular kivas that Mesa Verde features, but is only a semi-circle. It looks like it has been worked on somewhat.

This structure appeared to be isolated, nothing else near it that I could see. The other site that I noticed was a shelter under a rock overhang with some rockwork in front. I also saw a very small rubble pile, but it didn’t appear to be big enough to be a structure. 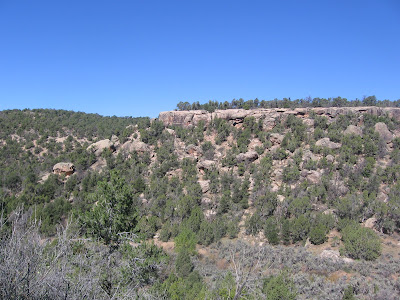 After about 1:45 hours, about 2.5 miles, there is a large rocky outcrop on the west side with a mild slope down to the canyon bottom. Scanning the many large boulders with binoculars, it looked like there was some rubble near one of them. At the canyon bottom there is a small creek to cross. 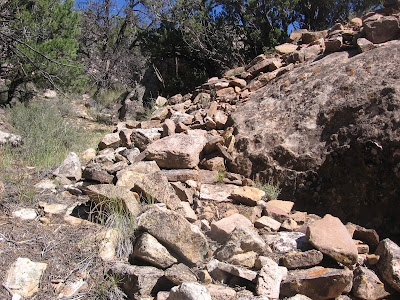 Climbing up the other side, I passed another small shelter site in a small rock alcove. 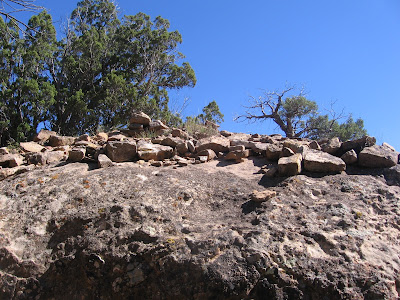 This site looked like it could have been a tower perched on the boulder, and all the material has tumbled off, piling up along the sides. Except for the small shelter, I didn’t see any other structures near this site. 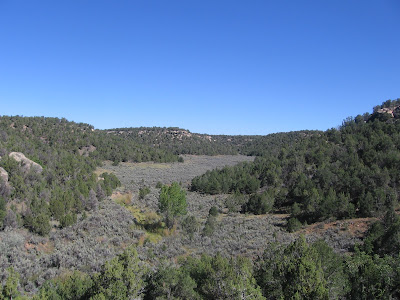 The area north of the rubble pile site has several forks of the head of Ruin Canyon and a wide sagebrush field on the canyon bottom. There is a trace of an old road leading to the west. I followed the old road trail for about 0:15 minutes and spotted another rubble pile near the top of one of the mesa areas. 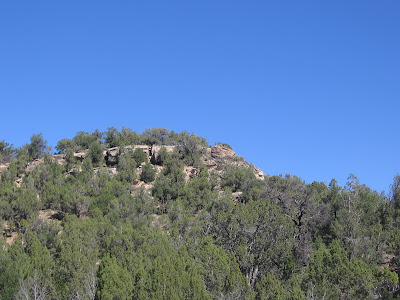 I didn’t climb up to view the second rubble pile site. It is just below the rim and didn’t appear to be part of a large site. I turned around after about 3:00 hours of exploring and my return hike took 1:50 hours for a total hike of 4:55 hours for about 6 miles. It was a blue sky 58 F degree early October day and I drank two of the three liters of water I carried.
Posted by Todd Lochmoeller at 4:36 AM