In the central part of the Canyons of the Ancients in southwest Colorado, the lower part of Cross Canyon, south of Pedro Point, has several east side canyons that don’t seem to have names.

In this area, there is a loop road that is an established mountain bike route.  The loop has a starting point near an old corral that is about one mile north of the turn off to the Holly and Hackberry outlying Hovenweep National Monument sites, along County Road 10. This corral area is also about 3.6 miles south of the turn off for the Painted Hand Trail. 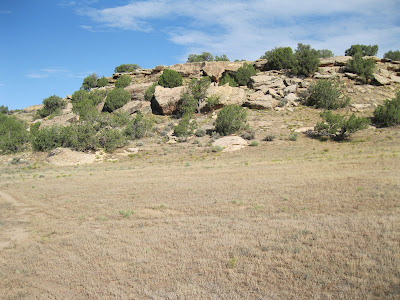 Across County Road 10 from the old corral, there is a dirt road trail that leads northwest. I followed this trail for 0.3 miles to a junction with another road trail that is closed to vehicles. At this junction, there is a rock outcrop with many large boulders sliding down the hillside. 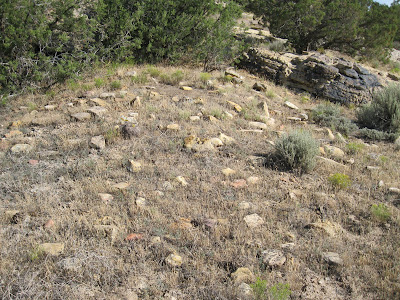 Near the base of this rocky hill there is a rubble pile Ancestral Pueblo ruins site. I was only a few minutes into my hike when I noticed this site, a good start. 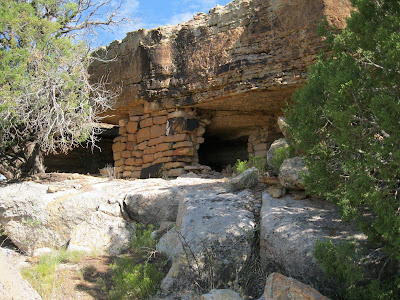 A collection of boulders is usually a good place to look further. Up near the rim, there is a very small alcove with a small structure. Other than the Sand Canyon area, there aren’t very many alcove sites in the Canyons of the Ancients. 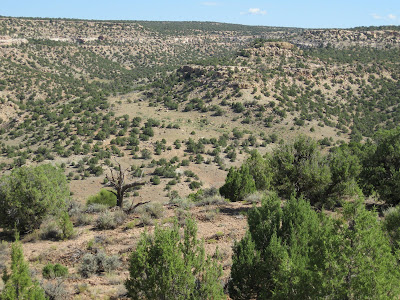 At this trail junction, there is a choice of continuing to the northwest, or turning left and going mostly southwest, toward a rim area with overlooks of the lower Cross Canyon area. I turned left. I was able to continue for about 0:45 minutes, scanning the side canyons with binoculars.

There are a lot of good canyon views, but I didn’t see any more ruins in along this segment of trail. I returned back toward the junction and could have ended my hike after about 2:00 hours. But I cut north across the canyon head and looked a little further to the north and east. 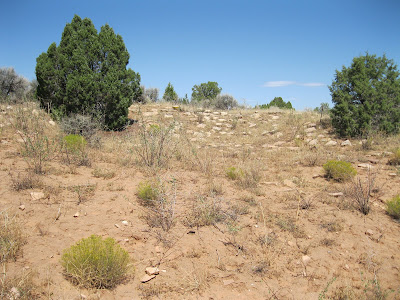 There is a very long side canyon that extends northeast all the way to the south side of the Pedro Point area. I hiked along this south rim of this long side canyon and for a while I was back on the established trail, which seems to end at the rim. 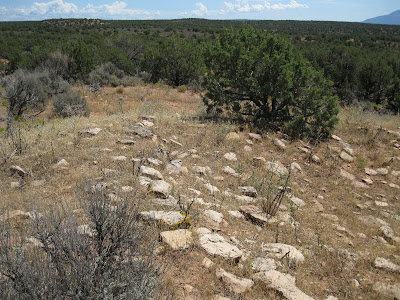 I used a compass and started to hike southeast back toward my starting point when I came across a large semi-circular ruin structure. This site seemed to have a curious location. It wasn’t very close to the canyon rim or on a hilltop.The concept of shrines is somewhat vague, but this might be one. This site might be hard to find again. Looking east from the site, I could see vehicles on the paved Road 10 about 0.5 miles away, and the old corral is about 1 mile to the south. 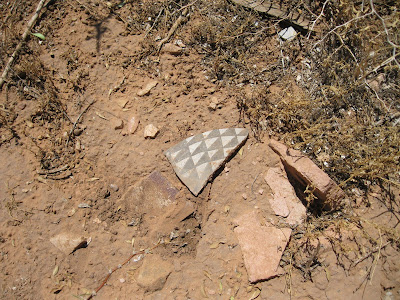 There was lot of pottery visible at this site, including a few of the largest shards I’ve seen. There might be a small check dam across a small wash near the site. Check dams are easy to see when they are pointed out at Mesa Verde, but I don’t seem to see them in the backcountry areas. 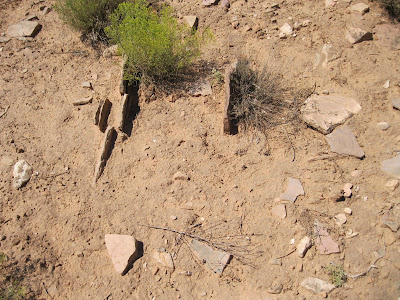 Associated with the large circular structure was a site with several flat rocks turned on end. The interpreted sites at Mesa Verde describe rocks like these as possibly being the lining of underground food storage structures. From this site it took me 0:50 minutes to return to the old corral. My total hike took about 4:00 hours for about 8 miles. It was 72 F degrees at 9:20 AM and 86 F degrees at 1:30 PM on a late August day. I carried and drank 3 liters of water.


Posted by Todd Lochmoeller at 5:39 AM