Beginning November 23, 2012 and extending to April 2013, the Anasazi Heritage Center in Dolores, Colorado is hosting the Ancient Skywatchers of the Southwest Exhibit.

Images by photographer John Ninnemann show how the Ancestral Pueblo people that lived in the Four Corners area prior to the arrival of European American settlers had an advanced understanding of the paths of the sun and moon. This knowledge was important in the timing of crop planting and ceremonial events. 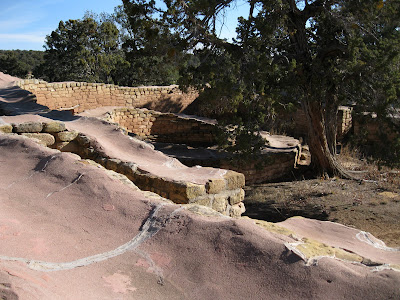 Along the first wall when entering the exhibit there are displays on the moon and the sun and images from Mesa Verde National Park. The Mesa Verde images emphasize a particular view point marked by a small pecked basin that is south of the famous Cliff Palace. From this pecked basin the sun sets directly over the Sun Temple on the Winter Solstice. I don’t think the pecked basin is pointed out on the normal Cliff Palace tours, or maybe it off the trail and not visible.


The Sun Temple is easy to visit site on the self guiding Mesa Top Tour at Mesa Verde. The trail guide points out that there is a natural rock basin in the southwestern corner that Jesse Walter Fewkes speculated was a solar marker. No evidence of roof material was found at the Sun Temple, leading the conclusion that the structure was unfinished. 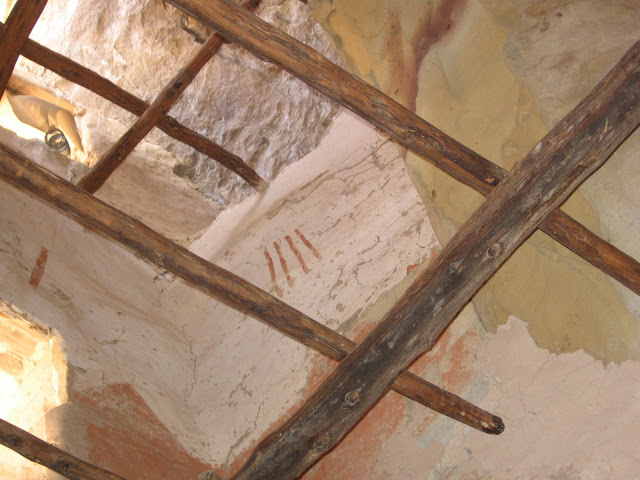 A four story tower on the south end of the Cliff Palace alcove has some artwork visible on the interior. If you aren't in a hurry at the end of the tour, you can usually wait in line to lean into a small doorway and look up.

The older trail guides for Cliff Palace describe these images as decorative but the Skywatchers Exhibit suggests that these may represent a record of observations of the moon. The exhibit has a close up picture of the artwork that gives a better view than a visitor can see on the tour.

The guided tours of Cliff Palace are usually offered from April to November. In the winter season, there are good view points from the Sun Temple and the Cliff Palace trailhead. 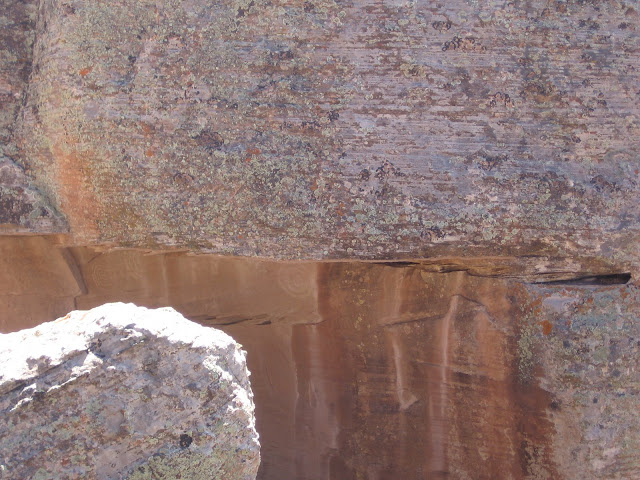 The second long wall has displays of Hovenweep National Monument and Yucca House National Monument. The Holly Ruins Group is one of the outlying Hovenweep sites and is located about 4 miles north of the Hovenweep Visitor Center. At the south end of the Holly Group there is an overlook of a petroglyph panel that is thought to mark the summer solstice. 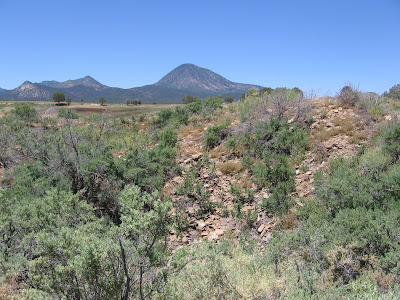 Yucca House National Monument is a large unexcavated ruins site located south of Cortez, CO between Mesa Verde and Sleeping Ute Mountain. The sun at winter solstice appears to set on top of the toe of the Sleeping Ute when viewed from the upper Great House. The Yucca House site is easy to visit but doesn't get much publicity. 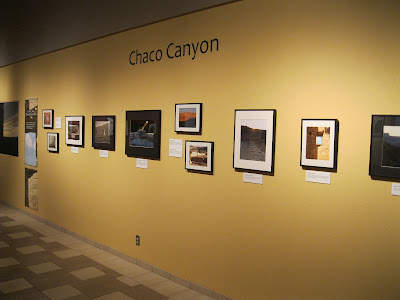 Pictures of Chaco Canyon in northwest New Mexico take up the third wall of the exhibit. Chaco Canyon has many examples of knowledge of the heavens. On the Penasco Blanco Trail there are pictographs that are thought to depict the Supernova of 1054 AD. There are several nearly exact north and south alignments at Pueblo Bonito and Casa Rinconda. 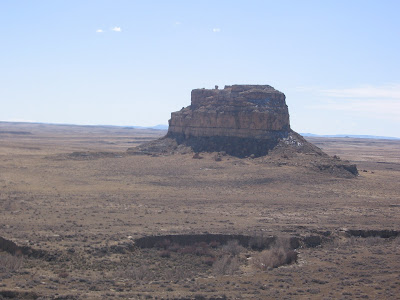 Fajada Butte is probably the most prominent archaeoastronomy site in the Chaco Canyon Park. Visitors can only view it from the distance but interpretive signs point out that there are three boulder slabs directing sunlight onto petroglyphs that mark the solstices and equinoxes. There are good elevated views of Fajada Butte from the Chaco Canyon Overlook Trail at the Gallo Campground. 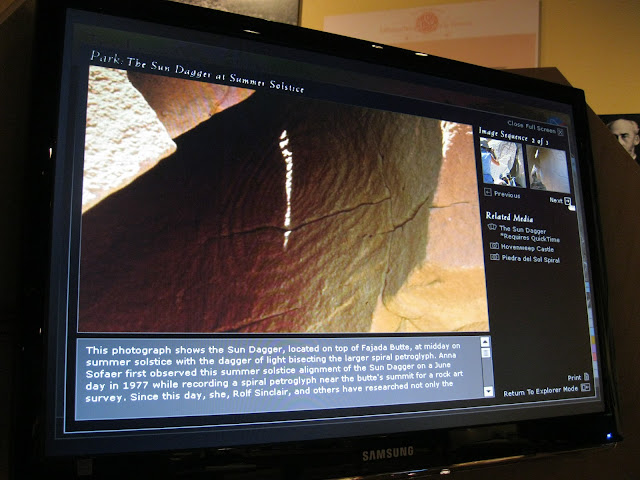 The Anasazi Heritage Center has more information than is obvious at first glance. In the main gallery there is a table with four computers. One of the computers focuses on Chaco Canyon and the greater Chaco community. Part of the computer display discusses the Fajada Butte solar site and includes more Skywatcher pictures and discussion. 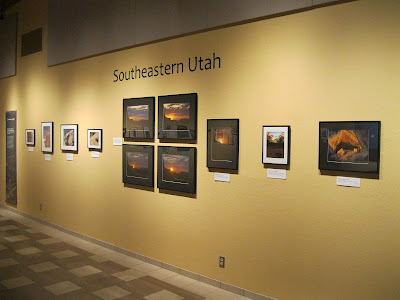 The fourth outer wall of the Exhibit features Skywatcher sites from the Cedar Mesa and Comb Ridge area of southeast Utah. The set of four images shows the sun rising close to the summer solstice along the cliffs north of the San Juan River. Other images show some of the many alcove sites in the Cedar Mesa area. The Cedar Mesa area has many interesting trails but they are mostly unpublicized. 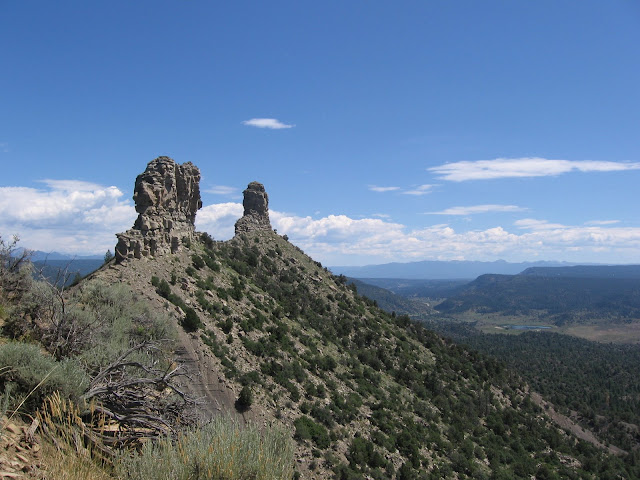 The center of the exhibit floor features Chimney Rock, the Yellow Jacket Pueblo, and the V-Bar Ranch. Chimney Rock between Bayfield and Pagosa Springs, CO has been elevated to National Monument Status in 2012. There are two short trails at Chimney Rock with the Great House Pueblo Trail appearing to be closely associated with the Lunar Standstill. The largest north and south difference between where the moon rises during its monthly cycle occurs on a regular 18.61 year cycle that is known as the Lunar Standstill. 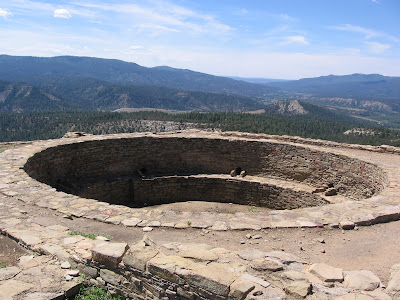 There is a large Great House ruins site with a good view of the Chimney Rocks. This is an unusual high elevation location for a large structure and there doesn't seem to be any reason for it to be here except for these Skywatcher observations. This is an easy site to visit. 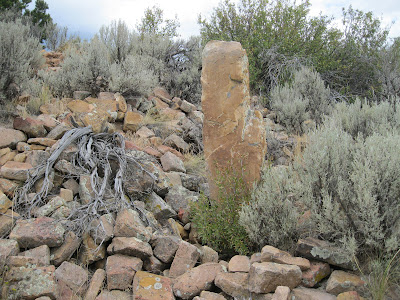 Yellow Jacket Pueblo is the largest known ruins site in the Mesa Verde region. Tours of the Yellow Jacket Pueblo are offered usually three times per year during the summer months. The tours are publicized and arranged at the Anasazi Heritage Center.

One of the interesting features of the tour is the solar monument that appears to line up with the Lizard Head formation in the San Miguel Mountains that are near Telluride. 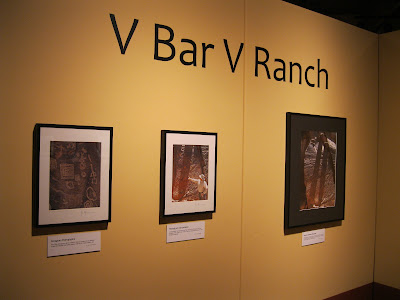 The V-Bar V Ranch is near Sedona, Arizona has a petroglyph site with 1032 glyphs on 13 panels. It is believed that part of the petroglyph site is a solar calendar that would have aided the agricultural activity in the area. 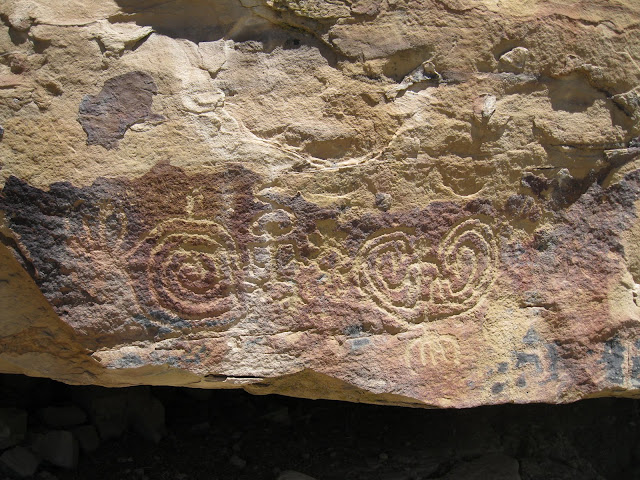 Not included in the exhibit, but part of greater Mesa Verde is the Mancos Canyon area of Ute Mountain Tribal Park. There is a special Sun Calendar Tour, usually offered in late May that visits several monuments and petroglyph panels that are also thought to be related to the Ancient Skywatchers.

Posted by Todd Lochmoeller at 9:08 AM